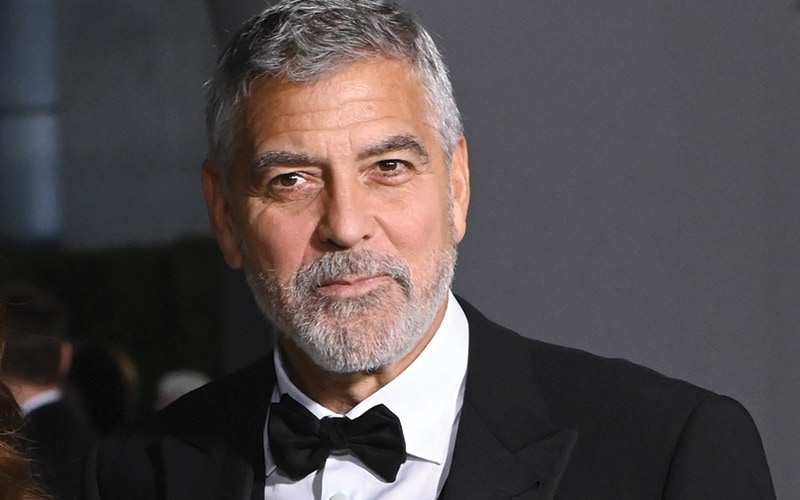 George Clooney is an American actor and producer best known for playing iconic roles like Batman in Batman & Robin, Danny Ocean in Ocean’s Eleven, and Doug Ross in ER. Having started his acting career in Hollywood in the late 1970s, Clooney has appeared in more than 75 movies and television series.

Over the span of four decades, George Clooney’s net worth has steadily grown. However, his net worth comes from more than just his acting career. Read on to find out how he earned his biggest salaries and trace his journey from the beginning of his career.

George Clooney was born in Lexington, Kentucky, on May 6, 1961. His mother is Nina Bruce, and she is a former beauty queen as well as a city councilwoman. His father is Nick Clooney. He was a TV host and anchorman who spent 5 years with AMC. Clooney also has an older sister whose name is Adelia.

Clooney’s family tree included a number of famous celebrities in the entertainment industry. The actress and cabaret singer Rosemary Clooney is his aunt. Actors Miguel Ferrer, Rafael Ferrer and Gabriel Ferrer, whose wife is Debby Boone, are his cousins. He is also related to President Abraham Lincoln through a great-great-grandmother on the maternal side.

As part of a Catholic family, Clooney attended the Blessed Sacrament School in Kentucky. He also studied at St. Michael’s School in Ohio, transferring later on to Western Row Elementary School. Clooney also attended St. Susanna School where he was an altar boy.

Clooney graduated from Augusta High School in Kentucky and got consistent A’s and B’s. He also played basketball and baseball, but unfortunately did not make it to the Cincinnati Reds when he tried out.

After high school, Clooney took up broadcast journalism at Northern Kentucky University. He later transferred to the University of Cincinnati but didn’t get a degree from either school.

Clooney’s first few years in Hollywood were not nearly as glamorous as his life today. But he wasn’t exactly destitute because he was staying with his famous aunt Rosemary Clooney while looking for work.

Soon, he landed small roles in famous television shows. Some of his earliest appearances were in The Facts of Life, Murder She Wrote, The Golden Girls, and Roseanne.

The first TV role that really catapulted Clooney to fame was as Dr. Doug Ross in the medical drama ER. It is interesting to note that Clooney also appeared in an earlier sitcom called E/R back in 1984. The two are completely different shows. Making a reported $100,000 per episode of the series, George Clooney’s net worth grew by $11 million from the show alone.

While doing ER, for which he appeared in a total of 109 episodes, Clooney also appeared in several blockbuster films. Among his more famous movies from the 90s were From Dusk till Dawn, One Fine Day, and Out of Sight.

He also starred as Batman in the 1997 Batman & Robin. The DC had a budget of $125 million and earned more than $238 million worldwide. Clooney was reportedly paid $1 million while co-star Arnold Schwartzenegger was allegedly paid $25 million.

In 2000, Clooney was cast in the role of Captain Billy Tyne in The Perfect Storm. This was quickly followed by the comedy-drama O Brother, Where Art Thou? Both films did very well at the box office and critics praised him for his performance.

One of the biggest boosts to George Clooney’s net worth came with the Ocean’s movie franchise. The 2001 film would become one of the most iconic films of Clooney’s career. Not only did this film propel him to new heights of fame, but it also earned him a cool $20 million in base salary alone. He went on to reprise his role in the sequels Ocean’s 12 and 13.

His on-screen chemistry with Brad Pitt and the rest of the Ocean’s cast also earned them a few awards. They won the Teen Choice Award for Choice Movie Chemistry in 2007. Clooney also got the People’s Choice Award for Favorite on Screen Match-Up with Brad Pitt in 2008. Additionally, Clooney was also voted Best Dressed for Ocean’s Eleven at the 2002 MTV Movie & Music Awards.

In 2007, Clooney starred in the crime drama Michael Clayton. The movie tells the story of a law firm that brings in its “fixer” to fix situations after a lawyer realizes that his chemical company client is guilty in a multibillion-dollar lawsuit. With a budget of $25 million, the film grossed more than $92 million worldwide.

Up in the Air

2009 brought the rom-com Up in the Air. The film, which was directed by Jason Reitman, was nominated for 6 Oscar awards, including a Best Actor nomination for Clooney. His co-stars, Vera Farmiga and Anna Kendrick, also received nominations for their work.

The box office earnings also reflected the film’s success with critics, earning over $166 million on a budget of $25 million.

In 2011, Clooney not only starred in Ides of March, but he also directed the movie. Ryan Gosling, the late Philip Seymour Hoffman, and Marisa Tomei also starred in the flick. And with a budget of $12.5 million, the movie raked in more than $76 million worldwide.

In 2013, Clooney starred alongside Sandra Bullock for Gravity. With a budget of $100 million, the film would gross more than $723 million globally. The movie’s financial success makes it Clooney’s highest grossing film.

In 2006, Clooney won his first Academy Award for Best Supporting Actor for his performance in Syriana. The same year, he was also nominated for Best Director and Best Original Screenplay for Good Night, and Good Luck. In 2013, he was in the movie Argo which won Best Picture.

Clooney also won Golden Globe Awards for Best Actor in O Brother, Where Art Thou? and for Best Supporting Actor in Syriana. Clooney has also received 9 nominations and 1 win at the BAFTA. For his TV roles, Clooney has received nominations for Primetime Emmy Awards for his work in ER in 1995 and 1996.

In December 2020, Clooney starred in Netflix’s The Midnight Sky, which was based on the book Good Morning, Midnight by Lily Brooks-Dalton. Clooney also directed the film.

His next project would be in the fall of 2022, where he starred opposite Julia Roberts in the rom-com A Ticket to Paradise. With a budget of $60 million, the film earned $154 million worldwide.

Also adding to George Clooney’s net worth include the sale n addition to his Casamigos Tequila company. He sold it for $700 million to Diageo in 2017, with potentially $300 million more if the company performs well.

Also adding to his net worth is the commercials he’s appeared in for Nespresso since 2013. It’s estimated his deal with the brand has paid $40 million over the years.

Real estate investments also significantly increase George Clooney’s net worth. Clooney and his wife, Amal, own properties in Mexico, France, Italy, and Los Angeles. However, the most impressive property is his Lake Como villa. Clooney purchased the property for $7 million back in 2002. The home also includes a garage filled with Clooney’s classic cars.

The year after Clooney and Amal tied the knot, they purchased a 17th-century mansion on the English Island of Sonning. The $10 million dollar property sits next to the Thames river.

In 2016, Clooney and pal Rande Gerber sold their neighboring villas in Cabo San Lucas, Mexico, for $100 million. Clooney had his custom home built in 2009 by the architecture firm Legorreta + Legorreta.

They also own a swanky condo in New York City. The couple acquired a full-floor apartment in 2016 for $14.7 million in the high-rise on One Hundred East Fifty-Third Street.

In 2021, the couple made another real estate investment, this time buying a Provence wine estate in Brignoles, France, valued at $8.3 million.

Clooney’s wife Amal Clooney (nee Alamuddin) is a British-Lebanese human rights attorney. They were married in September 2014 by Clooney’s friend and the former mayor of Rome, Walter Veltroni. George and Amal are now the parents of 5-year-old twins Ella and Alexander.

Before his current marriage, Clooney has been known for his rather prolific love life. He dated actress Kelly Preston from 1987 to 1989. In 1989, he married actress Talia Balsam but they separated in 1993. Clooney then briefly dated actress Ginger Lynn Allen.

From 1995 to 2000, Clooney dated Cameron Diaz, Frances Fisher, and French celebrity Celine Balitran. He was also rumored to have dated Lucy Liu and Charlize Theron. He then had a 5-year on-off relationship with model Lisa Snowdon starting in 2000. During this time, he also dated other actresses including Renee Zellweger, Jennifer Siebel Newsom, Krista Allen, Linda Thompson, and Sarah Larson.

From 2009 to 2011, Clooney’s girlfriend was Italian actress Elisabetta Canalis. From 2011 to 2013, he dated Stacy Keibler from the WWE. After meeting Amal, Clooney found his missing piece, and finally settled down and tied the knot.

As of 2022, George Clooney’s net worth is estimated at $500 million. While that number is largely impacted by his acting career, his work as a director and producer, the sale of his tequila company, and his real estate investments also impact his net worth.

Most of Clooney’s upcoming work will see him either in a director or executive producer role, including The Boys in the Boat, which stars Joel Edgerton. Additionally, Clooney also has another project in pre-production where he’ll star alongside Brad Pitt again. The project currently is untitled, but it is being written and directed by Jon Watts. And those are just two of more than 25 projects that Clooney has in various stages of development.

Megyn Kelly net worth: Her fortune and how much does the controversial presenter earn...