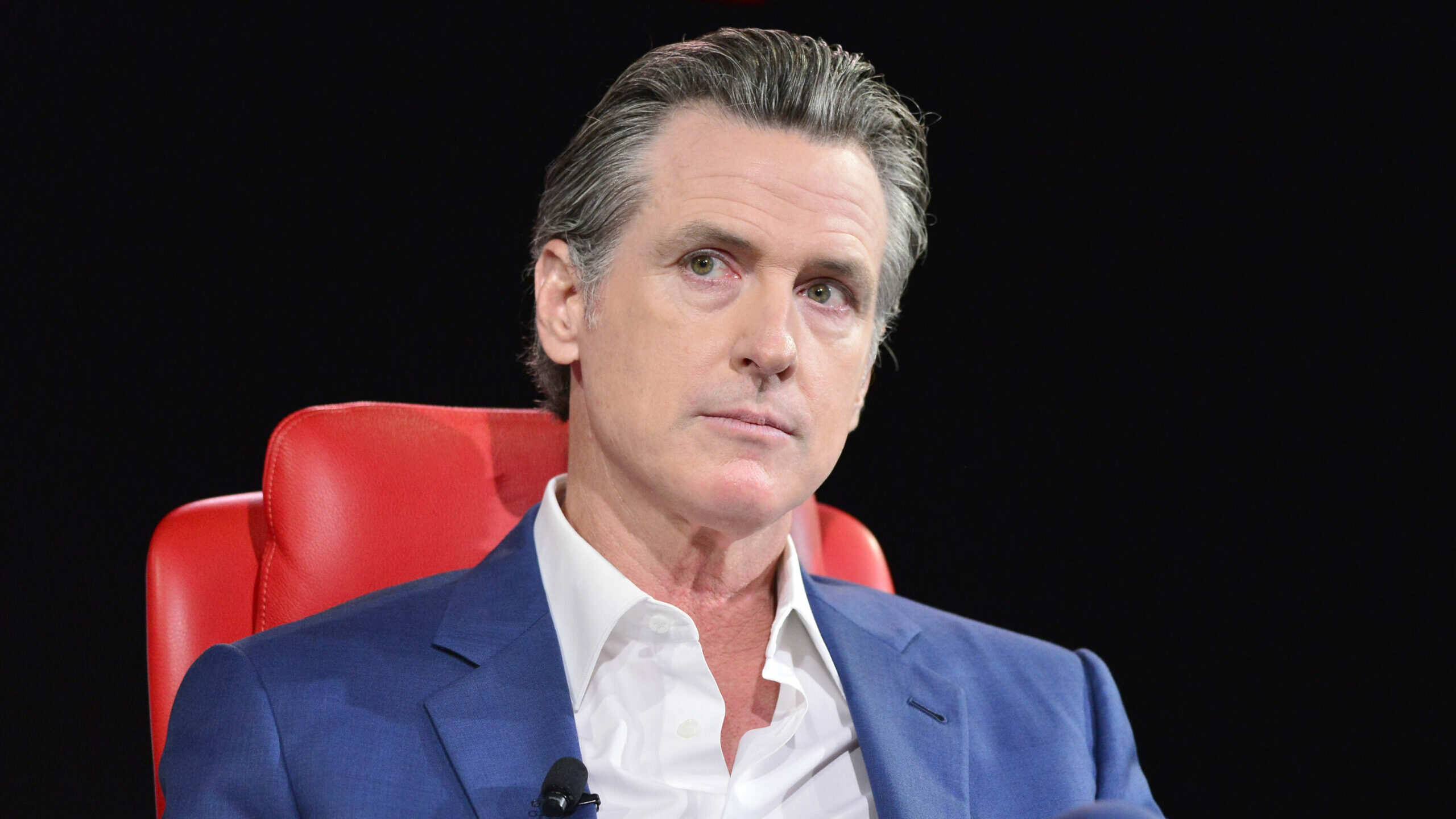 Gavin Newsom, the California governor who is ostensibly focused on his reelection this fall, is also the Democrat most obviously positioning himself to run for president in 2024 or 2028, whenever Joe Biden steps aside. Indeed, Newsom’s ambitions have become practically impossible to ignore over the last several months, telegraphed via a barrage of shit-kicking policy moves and unnecessary political stunts that have enlarged his national profile—from running ads in Texas and Florida attacking G.O.P. governors to erecting billboards in red states promoting California’s abortion services to narcing on Ron DeSantis for shipping migrants to Martha’s Vineyard. “All I can say is, I think his hair gel is interfering with his brain function,” DeSantis shot back. Newsom, who insists he has “sub-zero” interest in running for president, responded by challenging him to a primetime, televised debate.

But the Newsom maneuvering that has Silicon Valley insiders buzzing these days is the position he has taken to align himself with some of the state’s biggest tech donors against a nominally pro-climate, anti-billionaire tax being promoted by one of the state’s biggest tech companies. Not only is the Democratic governor attaching his brand to the state’s moderate business community, but Newsom has also made himself the star of the deepening internecine spat, in which Silicon Valley has gone to war with itself over a ballot measure that would jack up taxes on wealthy Californians to further subsidize the electric vehicle industry.

On one side of the divide is the ride-sharing company Lyft, which has invested a substantial $25 million into supporting the November ballot initiative. Proposition 30, which would hit anyone making more than $2 million a year, has some token support from liberal machers like Ron Conway and Tom Steyer, but Lyft effectively sponsored the measure, and it is Logan Green, the company’s affable, very un-Travis Kalanick-like founder-C.E.O., who has been wrangling support for the measure behind the scenes, I’m told—petitioning other tech companies and high-net-worth types to join in, making fundraising calls, bugging other tech leaders to sign on, and hosting policy briefings. Still, 97 percent of the money raised by the “Yes” team so far comes from Lyft, which says it’s backing the measure primarily to incentivize E.V. usage. Newsom contends that Green’s real goal is to trick taxpayers into covering Lyft’s costs to meet the state’s new E.V. mandate.

See also  A Grip on Sports: Sounders' win moves the franchise into the upper echelon of soccer

Whatever the case, the climate initiative has become divisive in Silicon Valley, fueling a furious advocacy campaign to kill the bill. Behind the last-minute offensive is a group of centrist, anti-tax donors organized by a powerful group called Govern for California. Started a decade ago by David Crane, a former operative for Arnold Schwarzenegger who lives in San Francisco and is well-liked by center-right tech leaders, GFC essentially bundles contributions from these business types to counter labor unions (although interestingly, the teachers union has sided with GFC and Newsom). Crane has turned what was once a low-profile donor network into a ubiquitous, fearsome California political machine, sending a lifetime total of about $12 million to legislative candidates, mostly moderate Democrats, in the state.

Now the group is engaged in its biggest, most expensive fight to date. The “No” campaign is trying to raise $50 million to beat back Prop 30, according to an email sent by Kristin Hueter, a fundraiser for the campaign and perhaps the Bay Area’s top G.O.P. finance hand. “We are just getting started—need to raise $50 million to kill this,” she wrote to a donor in an email, which made its way to the “Yes” campaign, which was then passed along to me. “I’m working on the Republican side—hoping to put together $20 million towards the goal. The varied teams will raise the other $30 million.”

Among the donors to the “No” cause is the Fisher family of San Francisco, who are close to Crane, founded the Gap, and are as old-money as they come in this town. Hueter wrote in her email that the Fishers are “jumping in first—big,” although, I’m told, the family has only donated about $1 million, and a lot of time on Zoom, thus far. (Bill Fisher didn’t respond to a request for comment.) Overall, the “No” side has raised about $10 million to date, or one-fifth of its goal, with the “lion’s share” coming through GFC, according to “No” leader Matt Rodriguez, a Democratic strategist. “$50 million is the magic number. If the ‘No’ campaign hits that mark, then the prospect of Prop 30 passing is pretty minimal,” one person close to the “No” campaign told me.

Crane is working hard to get there, whipping his network over the last few weeks to put together the budget. In recent weeks, the “No” side has collected $1 million checks from Sir Michael Moritz, the legendary Sequoia Capital investor, and Mark Heising, the private equity founder married to billionaire Jim Simons’s daughter, Liz. But the effort to kill the bill has been a slog. At first, according to the emails that were shared with me, Crane tried to use his network’s influence in Silicon Valley to get Lyft to pull the measure entirely. “If you have relationships with Lyft board members or influential shareholders, please weigh in with them to encourage the company to back off. If it does not, millions will have to be raised from you and others to defeat the measure on the ballot,” he wrote to some GFC members in May. A few weeks later, he followed up: “FYI a well-placed GFCer spoke recently to a Lyft insider who says the company remains committed to its ballot measure,” Crane wrote. “Prepare to dig deep and be thinking of others you can encourage to do the same.”

It comes as little surprise that the “Yes” campaign is pillorying its critics like Crane’s group as a bunch of self-interested billionaires who are just trying to avoid paying a dollar more from their fortunes. Attacking top donors, whose names are required to be disclosed in California television ads, is a time-tested move with a long history in state campaigns.

The most recent poll shows that California voters support Prop 30 by 55 to 40 percent. But that was before Newsom himself started to appear on television, personally stepping into the breach last week and urging Californians to vote “No” in a blunt, direct-to-camera advertisement airing statewide. “Prop 30 is being advertised as a climate initiative. But in reality, it was devised by a single corporation to funnel state income taxes to benefit their company,” he says in the 30-second spot. “Put simply, Prop 30 is a Trojan horse that puts corporate welfare above the fiscal welfare of our entire state.” The “No” campaign has put $8.5 million behind the ad starring Newsom, in the hope that Gavin is uniquely capable of convincing wary Democrats to vote against a bill that is being sold as pro-climate and anti-billionaire.

Lyft has escalated all of this by countering that “not a single dollar of Proposition 30 is earmarked for the rideshare industry” and that “Governor Newsom stands with his billionaire donors looking to protect their bank accounts.” In a state with an unfathomable number of ballot propositions, Newsom, who isn’t afraid of tax hikes, probably would like to accomplish the state’s climate goals through a budget process that he controls, not through some fickle popular vote. But there is, of course, a political upside for him, too. Calling this a “Sister Souljah” moment for Newsom makes the E.V. measure far sexier than it is. But starring in television ads fighting a perceived liberal special interest is precisely the sort of strategic move that an ambitious blue state governor might make if he’s trying to play against type.

Despite His Outright Fame and $300M Net Worth, Phil Mickelson Once Failed to Succeed...

Ruben Randall - December 1, 2022 0
TV/Movies
Enough has been written about the newest MCU star Jonathan Majors who made an impact with his role as Nathaniel Richards in ‘Loki’ TV...