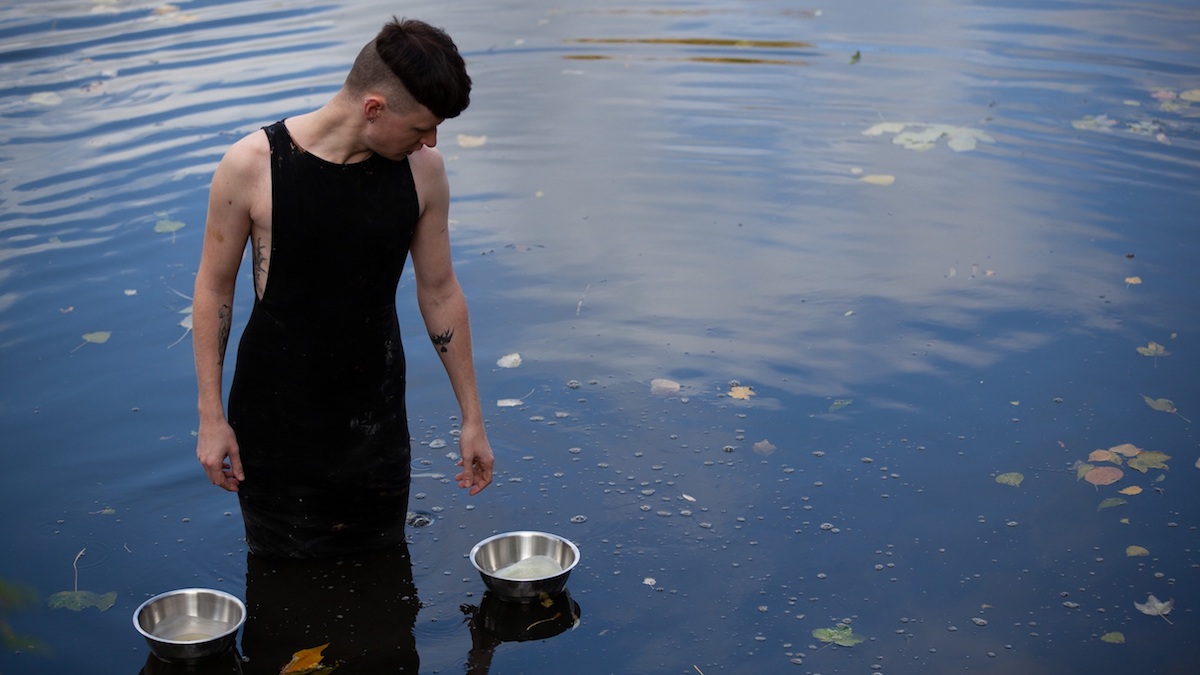 Exploring ritual in queer and performance cultures, FUTURERITUAL is a new, artist-led programme at the ICA this month. Curated by Joseph Morgan Schofield, a prolific young performance artist, writer and curator, Schofield’s manifestation of ‘queer ritual action’ is central to their vision and practice.

Featuring their own work as well as contributions from Charlie Ashwell, Rubiane Maia, Daniella Valz Gen, Es Morgan and Soojin Chang, FUTURERITUAL launches on May 18 with 3 Reflections², a live, 3-hour installation from Benjamin Sebastian. Amongst a constellation of mirrors, this work reflects aspects of the body, time and the spaces they inhabit.

Outside of FUTURERITUAL, Benjamin Sebastian and Joseph Morgan Schofield work side by side as co-directors of Folkestone’s ]performance s p a c e[ which in 2021, celebrated its inaugural decade with programmes in Folkestone and London. Schofield was the youngest of 9 artists including Anne Bean, Martin O’Brien and Poppy Jackson who took part in a packed, durational, 10-hour event, curated by founder Benjamin Sebastian. Together Sebastian and Schofield founded the VSSL Studio which they describe as “a container for performance and time-based art processes and practice”. VSSL is situated within Enclave, the burgeoning artist-run infrastructure in Deptford.

With bare feet touching the sky I yearn, 2019. Photo by Manuel Vason

RITUAL has been a long-standing focus for Schofield who says: “I think of ritual as a technology – it can produce community and a sense of belonging, and it facilitates us to experience time differently. As social, mortal creatures, this is a very important function. Performance art is a potent contemporary way of doing rituals, particularly for those of us outside of normative religion and culture. FUTURERITUAL acknowledges the importance of ritual, while at the same time asking how artists are remaking it in order to think about the future.

The ICA season is a gathering of performance practices by artists engaged in this work. It is spiritual, but it is also political. Each of the contributing artists draws on different spiritual traditions as they create their own unique cosmology, so the works are thematically linked but each very different. In a time where the air is so thick with grief and anxiety, it seems important to hold a space to process those feelings, as well as to celebrate many of the other facets of human experience like kinship and desire”.

On May 26, Joseph Morgan Schofield performs with bare feet touching the sky I yearn, at the ICA which explores prophecy, wildness and mythic time. Underpinned by a deep sense of longing about both loss and desire, this new commission calls to a trans* futurity, both wilder and rawer than the anxiety-ridden present.

“I find much of contemporary life ossifying:” says Schofield “Politics is deadening, cultural institutions are sedate and even the violence is banal. Life teems all around us – under the surface, in the cracks, through the air. Life is chaotic, multiplicities and nonbinary. Going out on the land and feeling the brunt of nature nourishes me, and reminds me that there is much more beyond the human world. It’s an experience intimately connected to my experience of gender and embodiment because it gives me a sense of freedom, that out there I am just one small thing. Through this performance, I am trying to create a ritual experience that temporarily breaks through to this richer, wilder experience of the world. My work often involves actions which are exhausting, painful or bloody. Pain and discomfort are not the goals but rather they are a tool – at the raw edge of experience, we feel differently”

On May 20, Schofield alongside frequent collaborator Es Morgan, facilitates Summoning, a free workshop for pairs of artists exploring queer kinship. Other works at FUTURERITUAL include Soojin Chang’s Heavenly Shower of Bank Notes on May 21, a ritual performance oscillating between a fighting ring, feast and transaction. Chang invites audiences to determine her fate by choosing either ‘feed’ or ‘pay’ while collaborator Georgie (Rei-n) performs as a mediator, facilitating the process of participation.

Rubiane Maia, originally from Brazil, completes the live lineup with Every Time I Trace The Horizon My Hands Catch Fire, a book performance on May 29. For a year Maia committed to writing daily influenced by automatic writing and psychogeography. A series of cathartic texts emerged including narratives from her daily life connecting layers of trauma, previously buried. Results morphed into this ongoing project of live performances where writings transform into symbolic actions.

The FUTURERITUAL season also includes Divinatory Strategies, a three-part sonic essay available via the ICA website after the season launch. Created by Joseph Morgan Schofield with contributions from Charlie Ashwell, Daniela Valz Gen, Es Morgan, Soojin Chang, Rubiane Maia and Teo Ala-Ruona, the work is inspired by a 20th century anthropological concept of a ‘threshold zone’ where order dissolved and participants existed in a time between their past self and a self yet to be experienced by ritual. This liminal stage was a place of possibility via the experience of not knowing. Divinatory Strategies invites listeners to navigate this unchartered territory while offering a complimentary conversational element to the live work.

Joseph Morgan Schofield curates FUTURERITUAL, a performance art season hosted by the ICA from May 18-29.

FUTURERITUAL events can be booked Here

All the upcoming TV and movie adaptations for 2022 – from...