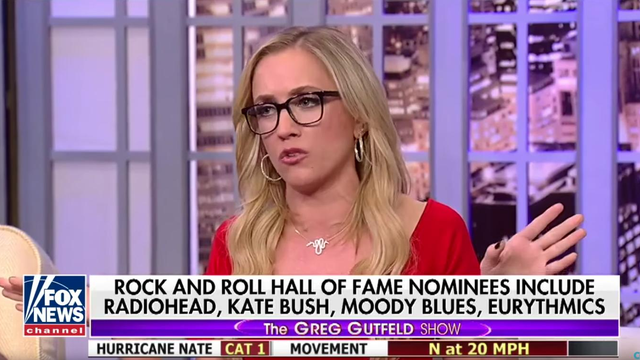 Watch as a Katherine Timpf lays into the band, despite admitting pretending to like them to impress the men she dated.

A correspondent on Fox News has taken aim at Radiohead.

Watch the clip, which was posted by Consequence Of Sound above.

Asked about her thoughts on this year’s Rock ‘N’ Roll Hall Of Fame nominees, Katherine Timpf replied: “If it’s about fame and not talent I think that Radiohead are definitely going to get in, and should get in.

“I don’t even like them, but the kind of guys I like have to be three things: strange, malnourished and sad and those guys always like Radiohead.”

She concluded: “So I’ve been pretending to like Radiohead for years to get these men even though the music is just elaborate moaning and whining over ringtone sounds.”

And if the host of the show looks familiar, that’s because Greg Gutfeld is the very same host who dubbed Red Hot Chili Peppers as “the worst band on the planet”.

See the footage, uploaded to YouTube by the outlet, below:

As reported by Consequence Of Sound, the news channel covered Flea’s recent visit to Koko the Gorilla, who played the bass while the RHCP man looked on in amazement.

However, co-host of the network’s show, The Five, took the opportunity to mock the funk rockers, saying: “As most musicians know, this is a vast improvement over the Red Hot Chili Peppers, the worst band on the planet”.

He explained: “I remember seeing a poll recently that said people who watch Fox News knew less about world affairs than people who watch no news at all. It’s clearly a funny programme. It doesn’t faze me, not really.”

Somebody I Used To Know trailer features director Dave Franco and his wife Alison...