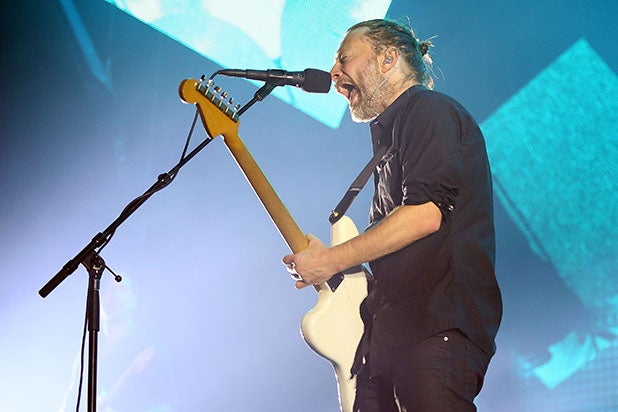 Greg Gutfeld thinks he knows his music. He’s Fox News’s de facto rock critic. Last year he wrote up his favorite albums of 2016, name-checking The Avalanches and King Gizzard & The Lizard Wizard. He even has a long-running beef with the Red Hot Chili Peppers. So he must know what he’s talking about when it comes to Radiohead, right?

On “The Greg Gutfeld Show” Saturday, he lambasted the British rockers led by Thom Yorke as “a poor man’s Coldplay.”

“Radiohead is a fine band, but they stole everything from Coldplay,” Gutfeld said. “Radiohead is the poor man’s Coldplay.” The segment came up following a discussion about being too politically correct over Halloween costumes, and Gutfeld suggested one of his guests go as a Radiohead fan.

Recently on Gutfield’s show Katherine Timpf, debating whether or not they belonged in the Rock and Roll Hall of Fame ahead of this year’s nominee class including Bon Jovi, Depeche Mode and LL Cool J, said Radiohead was just “elaborate moaning and whining for ring tone sounds.” She added that she wound up dating a lot of Radiohead fans because she was attracted to people who were “depressed, malnourished and sad.”

“I wasn’t saying it bad, I was saying it was sexy,” Timpf clarified. See, she wasn’t calling all Radiohead fans miserable. She was saying miserable people all like Radiohead. It’s a chicken and egg thing, really.

This moment of mainstream attention was so exciting to individuals otherwise suffering from a severe vitamin deficiency that even Radiohead guitarist Jonny Greenwood changed his Twitter bio to reflect that he too is “‘strange, malnourished and sad’ (fox news – *spits three times*).”

As to whether this claim against Radiohead is remotely true, let’s set aside the fact that Coldplay might just be the poor man’s Coldplay. They’re probably the third most ridiculed rock band today behind Nickelback and U2. Chris Martin was that guy dancing between Bruno Mars and Beyonce at the Super Bowl, after all. They were uncool back when “The 40-Year Old Virgin” came out. Heck, they were uncool when they launched onto the scene in the late ’90s.

Radiohead’s first album “Pablo Honey” came out in 1993, and Coldplay’s “Parachutes” arrived in 2000, when they were one of about a thousand bands to actually be labeled the next successor to Radiohead. Yorke and Co. had stopped recording stadium-sized buzz ballads like “Creep” and instead reinvented themselves as experimental, Y2K artists with “OK Computer” and “Kid A,” two albums in the running for Best Album of the Last 20 years status. Coldplay was there to fill that void of introspective pop rockers, and since then they’ve collaborated with Jay-Z, Rihanna and The Chainsmokers. One member of Radiohead meanwhile became the go-to composer for Paul Thomas Anderson.

On our count that’s Gutfeld zero. Radiohead 10. Watch the clip starting at the 36 minute mark here.

Ruben Randall - June 26, 2022 0
Money
A two-time heavyweight champion, Anthony Joshua is one of the most recognizable names in boxing. In the ring, Joshua has provided fans with memories that...