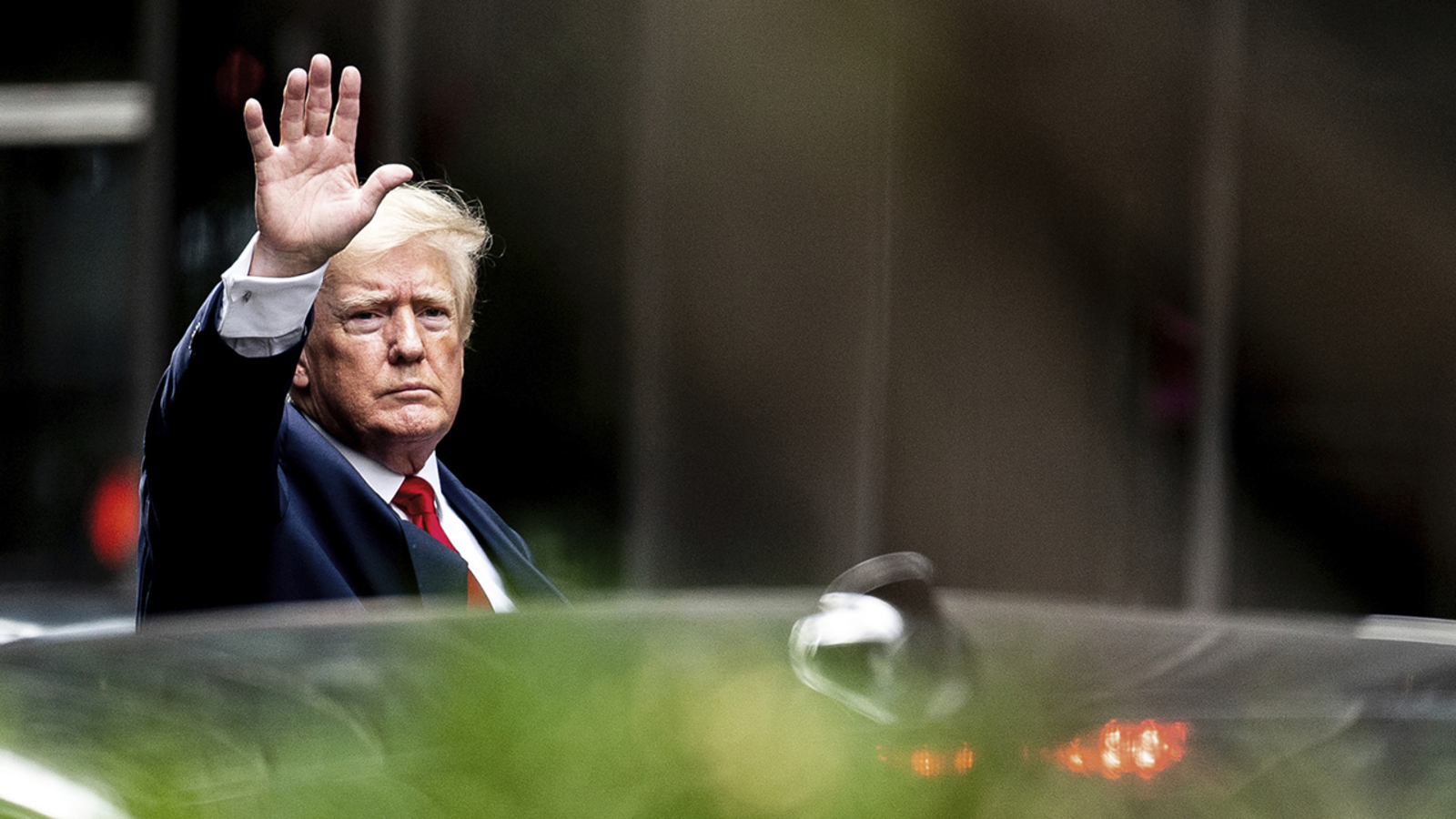 “Under the advice of my counsel and for all of the above reasons, I declined to answer the questions under the rights and privileges afforded to every citizen under the United States Constitution,” Trump said in a statement.

Donald Trump waves as he departs Trump Tower, Aug. 10, 2022, in New York, on his way to the New York attorney general’s office for a deposition in a civil investigation.

Trump was to be deposed by lawyers from New York Attorney General Letitia James’ office as part of a more than three-year civil investigation into whether the Trump Organization misled lenders, insurers and tax authorities by providing them misleading financial statements.

Trump said in a post on Truth Social earlier Wednesday morning that he would be “seeing” James “for a continuation of the greatest Witch Hunt in U.S. history! My great company, and myself, are being attacked from all sides. Banana Republic!”

Trump was seen leaving Trump Tower in New York City on Wednesday morning, and his motorcade arrived at the New York attorney general’s office shortly after.

The scheduled deposition comes during an extraordinary legal week for the former President. On Monday, the FBI executed a search warrant at Mar-a-Lago, his primary residence in Florida, in connection with an investigation into the handling of classified documents. On Tuesday, a federal appeals court denied his long-running effort to block a House committee from obtaining his tax returns.

Some Trump advisers had advocated that the former President answer questions since he previously testified about his financial statements under oath, while others warned him against providing any answers because of the potential legal jeopardy he may face, people familiar with the matter tell CNN. The Manhattan district attorney has a separate ongoing criminal investigation into the Trump Organization.

Another consideration that had been discussed, the people familiar say, is the political implications of not answering questions as Trump is widely expected to announce that he will run for president in 2024. While campaigning in 2016, Trump suggested not answering questions was a sign of guilt. At a campaign stop in Iowa in 2016, Trump said, “If you’re innocent, why are you taking the Fifth Amendment?”

In his statement Wednesday, Trump said, “Now I know the answer to that question” and decried James’ investigation. The former President and the Trump Organization have previously denied any wrongdoing.

“When your family, your company, and all the people in your orbit have become the targets of an unfounded, politically motivated Witch Hunt supported by lawyers, prosecutors, and the Fake News Media, you have no choice,” the former President stated.

In January, James’ office said it found “significant” evidence indicating the Trump Organization used false or misleading asset valuations in its financial statements to obtain loans, insurance and tax benefits. The attorney general’s civil investigation is nearing the end and a decision over an enforcement action may come soon.

The showdown follows Trump’s failed attempt to block subpoenas for depositions from him and his children, Donald Trump Jr. and Ivanka Trump.

Trump Jr., who runs the Trump Organization with his brother Eric Trump, and Ivanka Trump did not assert their Fifth Amendment rights and answered the state’s questions, the people said. It is not clear what they were specifically asked or what they said. Their decision breaks with Eric Trump and former Trump Organization Chief Financial Officer Allen Weisselberg, who both asserted their Fifth Amendment rights more than 500 times when deposed in 2020.

Trump has testified under oath in civil lawsuits over the past decades and since leaving office he has also been deposed. Last year he provided videotaped testimony for a lawsuit involving an assault outside of Trump Tower. The case is set to go to trial in the fall. Trump has denied any wrongdoing.

Questions about Trump’s net worth

Trump has been questioned about the accuracy of his net worth and financial statements in previous lawsuits, something some advisers say is one reason why he should answer questions in the current investigation.

See also  EXCLUSIVE: "He came and worked every day. Whatever happened after that is out of control"

In a 2007 deposition in a defamation lawsuit, Trump once said he calculated his net worth, to a degree, on his “feelings,” and that he put the “best spin” on some of the assets. “I think everybody” exaggerates about the value of their properties, he testified, adding: “Who wouldn’t?”

Did he inflate values? “Not beyond reason,” Trump said.

In the past Trump has tried to push responsibility for his valuation decisions onto Weisselberg, while at the same time, documents and depositions appear to show that, even as Trump claimed that he left those valuation decisions to others, he was also deeply involved in running his business.

Trump said in the 2007 deposition that the only person he dealt with in preparing the statements of financial condition was Weisselberg.

“I would give my opinion,” Trump said in the deposition. “We’ll talk about it,” he said, adding that “ultimately” and “predominately” it was Weisselberg who came up with the final values, which Trump said he viewed as “conservative.”

When questioned specifically about swings in values from one year to the next Trump had ready explanations.

During the deposition, Trump was questioned over the family compound in Westchester County, New York, called Seven Springs where its value nearly doubled in one year from $80 million in 2005 to $150 million in 2006.

“The property was valued very low, in my opinion, then and it became very — it just has gone up,” Trump said.

He was asked if he had any basis for that view, other than his own opinion.

In addition to Weisselberg, two others involved in the preparation of the financial statements, Jeff McConney, the Trump Organization’s controller, and Donald Bender, the real estate firm’s external accountant, have both been interviewed by the attorney general’s office and Manhattan district attorney.

Trump’s lawyers are likely to argue that the financial statements were not audited so anyone relying on them would be on notice. The financial statements reviewed by CNN show they have numerous disclosures indicating that they did not conform with generally accepted accounting principles. In addition, none of the lenders lost money on the transactions, which could make it harder to allege that they were defrauded or misled.

The appraisals underlying the property values were in many cases provided by Trump’s longtime appraiser Cushman & Wakefield, which is also under investigation. Cushman, which broke ties with Trump after the Capitol riot on January 6, 2021, has denied any wrongdoing and stands by its work.

The depositions pose significant legal risks to the Trumps.

If Trump is sued by James and the case goes to trial, the jury can draw an “adverse inference” against him for not answering questions, which could result in a higher judgment against him if he’s found liable. If he answers questions, it could open the door to potential civil and criminal liability.

The criminal investigation, led by Manhattan District Attorney Alvin Bragg, has slowed but not stopped. Earlier this year, Bragg would not authorize prosecutors to present evidence before a state grand jury after raising concerns about the strength of the case, CNN has reported. A special grand jury hearing evidence in the case expired in April, but a new one could be seated in the future.

Bragg told CNN in an interview in April: “Anytime you have a parallel civil, criminal investigation, if there’s testimony in that proceeding, obviously we will look at it.”

For UConn football, some brutal breaks, but more to love than lament in Jim...

Despite Being an Actor, Arnold Schwarzenegger Restricted Kids From Attending Hollywood Premieres: “They Were...

Ruben Randall - January 5, 2023 0
Actress
After graduating from Brown University, Sarah Levy moved to New York City in 2012 and began socializing with high-achieving millennials like herself – accomplished,...

The Win-Win Trade Idea For The Nets And Cavaliers: Kyrie Irving...

Here’s What Khloe Kardashian Spent Setting Up An Excessive Garage For...