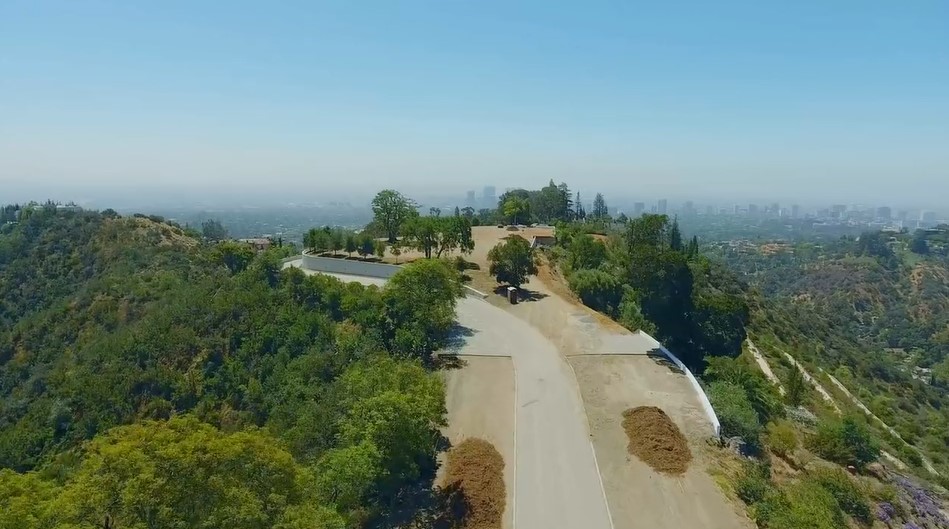 When Microsoft co-founder Paul Allen died in 2018, he left behind treasure trove of interesting assets. Allen, who co-created Microsoft with his childhood friend Bill Gates, had a net worth of $20 billion at the time of his death from cancer in October 2018 at the age of 65.

Here’s a quick rundown of some of Paul Allen’s coolest assets:

On that last point, in this article we are going to talk about one of Paul’s most-impressive real estate assets: A 120-acre piece of undeveloped land high up in the hills above Beverly Hills called Enchanted Hill.

And not to be technical but the property is actually located in an area called “Beverly Hills Post Office.” Residents of BHPO use “Beverly Hills” on their mail but their police, fire, water, garbage are not actually provided by the city of Beverly Hills.

Below is a video tour of Enchanted Hill which I’ll be referencing in a moment:

Back in 1925, a married pair of silent film stars named Frances Marion and Fred Thompson bought what was then a 22-acre undeveloped property. Their friend, actress Greta Garbo, named the property “Enchanted Hill.” It took Frances and Fred the next three years to complete construction on a 10,000 square-foot dream home plus stables for their prized horse collection.

Unfortunately, tragedy struck at their dream home almost instantly. Just days after they moved in, Fred stepped on a nail and contracted tetanus. He died three weeks later, on Christmas day, at the age of 38. Frances sold the property one month later.

You can see what Enchanted Hill looked like in the 1920s in the above video between the 5 and 10 second mark.

The next owner was a Texas oil tycoon who bought property in early 1929 for $580,000. That’s the same as a little over $16 million in today’s dollars. In 1942, 16 years later, the oil tycoon sold the property to an inventor named Paul Kollsman. Kollsman was one of the most successful inventors of all time. He patented the first barometer and many of the instruments that are still used to this day in modern air and space travel.

For unknown reasons, presumably local and civic resistance (or maybe he just lost interest), Paul never moved forward in building his dream compound at Enchanted Hill. He did manage to construct a driveway that spans over 1.5 miles. You can see this incredible driveway in the above video starting at the 16 second mark.

Over the next twenty years, Enchanted Hill remained an undeveloped hilltop over-run by shrubs. In July 2018 Paul Allen placed Enchanted Hill on the market. The asking price?

As we mentioned previously, Paul died from a long battle with cancer three months later, in October 2018.

In February 2020 Jeff Bezos was reportedly in contract to buy Enchanted Hill for $90 million. A month later that deal fell through. Don’t worry about Jeff though. On the same day he made a $90 million offer on Enchanted Hill, he also closed on a $165 million deal to buy an estate just down the street 🙂

See also  The 'groyper army' is looking to make white nationalism mainstream. It has key allies in Arizona politics.

Fast forward to the present.

On Monday a number of outlets reported that yet another tech titan has decided to try their hand at acquiring and developing Enchanted Hill. The latest tech titan is Eric Schmidt.

Schmidt earned his $26 billion fortune thanks to his two-decade career at Google which resulted in him owning 1.3% of the company’s outstanding shares today. Schmidt served as CEO from 2001 to 2011 and then was a Chairman and Technical Advisor through 2020. If the current reports are correct, Eric has secured ownership of Enchanted Hill from Paul Allen’s estate for…

That’s a relative bargain compared to Paul Allen’s desired $150 million asking price back in 2018, but, as time has proven, owning Enchanted Hill is an uphill battle. Schmidt will undoubtedly spend as much or even more than his purchase price developing the property. He’ll likely encounter fierce resistance from locals who are sick of billionaires building mammoth compounds that suck up unfathomable amounts of water in an area that doesn’t get a lot of rain, among other issues.

If Eric is successful, we do have a rough idea of what he might ultimately build thanks to a video tour of the property put out by real estate agents working for Paul’s estate.

This video lays out 3D renderings of how a buyer could develop Enchanted Hill into what clearly would be one of the most luxurious private compounds on earth. It could ultimately be like living at a private Four Seasons resort.

As you’ll see in the video below, Eric could create a compound that features five distinct complexes:

Eric Schmidt and his wife Wendy have been on somewhat of a real estate shopping spree in the last two years.

With Enchanted Hill, we estimate that Eric Schmidt owns $200 million worth of real estate in California alone. And that does not include the value of homes owned by his daughter Sophie Schmidt. Here’s one more very strange twist to this story:

In October 2021 Sophie Schmidt paid $22 million for a mansion that is just a few minutes drive from Enchanted Hill. At the time of her purchase, the mansion directly across the street was also for sale for $55 million. That mansion was being sold by the estate of… Paul Allen. I don’t know if this was a total coincidence or what, but Sophie Schmidt bought the house directly across the street from Paul Allen’s actual LA home. Not Enchanted Hill. An actual large mansion. Weird, right?

Undercover agent next in trial of Gov. Whitmer kidnap plot