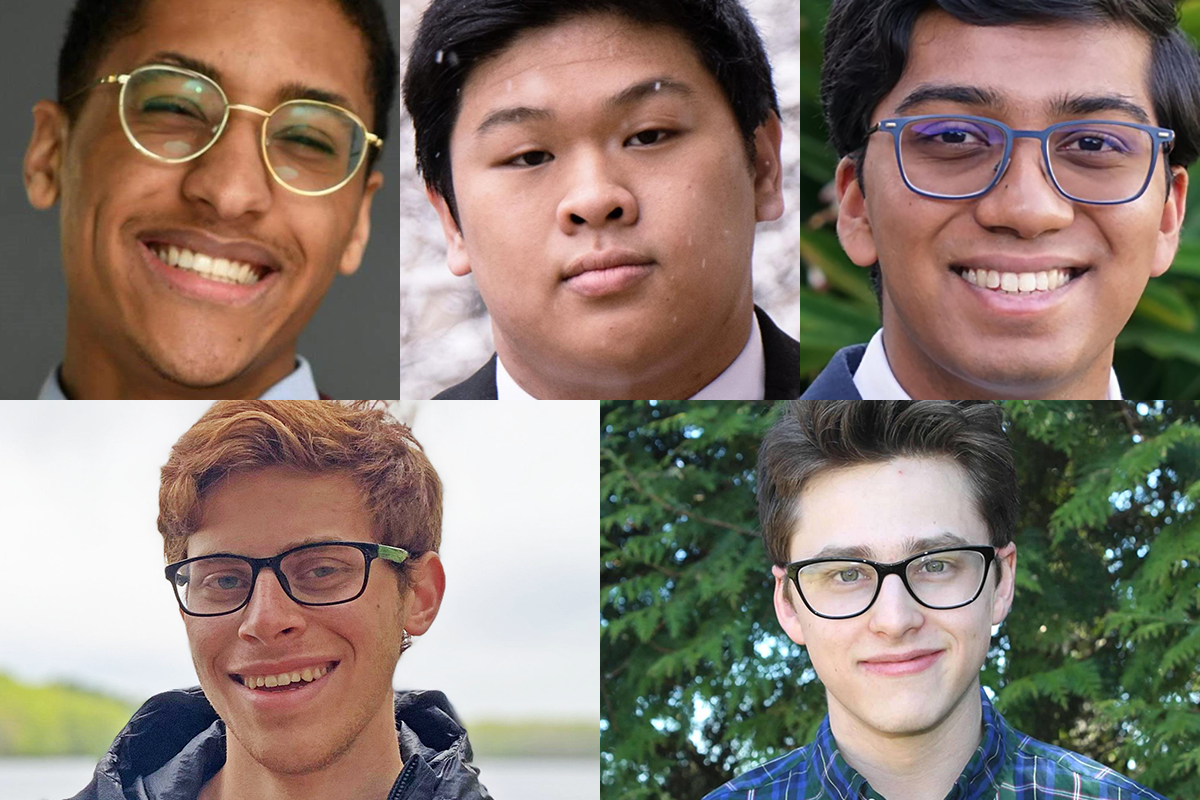 Five current graduate students and recent alumni have been awarded 2022 Hertz Fellowships in applied science, engineering, and mathematics. They are among 13 doctoral-level scholars chosen by the Fannie and John Hertz Foundation who demonstrate “deep, interconnecting knowledge and the extraordinary creativity to tackle problems that others can’t solve,” according to the foundation’s announcement.

“We face increasingly daunting challenges to our national security and defense, including climate change, response to pandemics, health care, and food security,” says 2004 Hertz Fellow Philip Welkhoff, who led the selection process and is director of the malaria program at the Bill and Melinda Gates Foundation. “John Hertz believed that to overcome such challenges our nation needs a vibrant, innovative cadre of researchers in the applied sciences with deep and broad knowledge, grit, and who are creative, curious, and determined to make a difference. The 13 newest Hertz fellows embody these values in unique and individual ways, and I am delighted to welcome them into the Hertz community and see what they achieve in the years ahead.”

Hertz Foundation Fellowship recipients receive five years of doctoral-level research funding (up to a total of $250,000), which provides them with flexibility and autonomy to pursue their own research interests, beyond the traditional graduate training path. Fellows also enjoy lifelong mentoring and professional support from a network of highly accomplished alumni fellows. The connections forged among these individuals has sparked collaborative startups, research, and technology commercialization.

Roderick Bayliss III ’20, MNG ’21 is currently a doctoral student in electrical engineering at the University of California, where he is focusing on developing more efficient and power-dense electronics. By improving power converters — which modify the current, frequency, or voltage of electric energy — in everyday machines, vehicles, and devices, he hopes to increase energy efficiency and ultimately, reduce our reliance on fossil fuels. Bayliss has been interested in energy efficiency throughout his time at MIT as an undergraduate and master’s degree student. An avid motorsports fan, Bayliss was a member of the MIT Edgerton Center’s Motorsports Team and helped design new battery and traction systems for Electric Formula SAE cars. He also worked on reducing the size and cost of electronics during internships at Tesla, SpaceX, and Apple.

Alexander Cohen, a mathematics graduate student at MIT, is studying harmonic analysis — particularly what mathematical analytical techniques can reveal about puzzling phenomena in applied science, in areas such as quantum mechanics and computer science. As an undergraduate at Yale University, he researched how structure and randomness are related for polynomials, and he collaborated with others in an effort to prove the uniqueness of a “first excited state” soliton in the cubic nonlinear Klein-Gordon equation. He received recognition for his work with a Barry M. Goldwater Scholarship and an honorable mention for the American Mathematical Society’s highest undergraduate award, the Frank and Brennie Morgan Prize for Outstanding Research in Mathematics.

David Li ’22 plans to pursue a bioengineering PhD at Stanford University, exploring computation molecular tools for manipulating cells and molecules. Before he begins his doctorate, he will study in the U.K. as a Marshall Scholar. Li majored in electrical engineering and computer science, with minors in mechanical engineering and economics, yet he has a long-standing interest in biology. He took MIT’s online courses in introductory biology and molecular biology as a middle-schooler; conducted research during high school at the University of Minnesota; and was part of a winning team in the national Genes in Space competition in 2018. At MIT, Li worked on gene editing technologies at the Broad Institute, where he helped develop new biological tools for genome editing and directed evolution. He also participated in the design of a new, large-scale Covid-19 testing method.

Scott Barrow Moroch is currently a physics graduate student at MIT working at the intersection of nuclear, atomic, and particle physics. Using precision physics experiments, he hopes to develop new techniques in the fields of ion trapping, radioactive isotopes, laser spectroscopy, and quantum technologies. Moroch has been designing tabletop experiments since he was a teenager, when he built his own particle accelerator and a nuclear fusion reactor. He was awarded a Barry M. Goldwater Scholarship for his undergraduate research at the University of Maryland, which included the development of a cryogenic Penning trap to study decay-rate perturbations in highly charged radioisotopes.

Syamantak Payra ’22 majored in electrical engineering and computer science and will begin a PhD at Stanford University this fall focusing on developing biomedical devices for a variety of applications, such as addressing physiological limitations and facilitating the diagnosis of disease. His interest in leveraging engineering to solve unmet health care needs stems from his own experiences growing up in Texas. There, Payra witnessed his grandmother’s struggles with respiratory disease and lost a baby brother to brain cancer. Motivated by interactions with a teacher paralyzed from post-polio syndrome, at age 14 he designed a robotic leg brace that won the Intel Foundation Young Scientist Award at the Intel International Science and Engineering Fair. Payra has also created digital fibers for electronic garments that can help diagnose illnesses and has helped prototype space suits that could better protect astronauts on spacewalks.

What is LA Clippers owner Steve Ballmer’s net worth? All you need to know

Ruben Randall - April 12, 2022 0
TV/Movies
Wait a minute! Is Kailyn Lowry getting her own show? The Teen Mom 2 star sparked major spinoff rumors after she posted a photo...

What to know about the teams in the Berks Boys Volleyball...