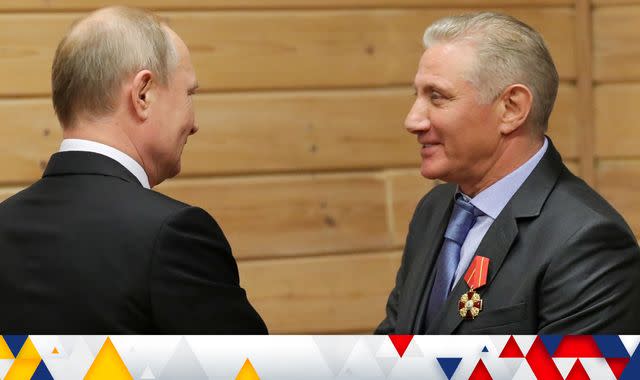 The UK is sanctioning five Russian banks and three oligarchs, freezing their UK assets and banning travel to Britain, Boris Johnson has announced.

The prime minister told the House of Commons it was the “first tranche” and “first barrage” of measures, in response to Russian troops moving into two separatist regions in eastern Ukraine.

“We hold further sanctions at readiness to be deployed,” Mr Johnson told MPs, as he warned of a “protracted crisis” in Ukraine following the actions of Russian President Vladimir Putin in the last 24 hours.

However, the PM faced immediate calls to go further now in sanctioning Russia and those close to the Kremlin.

The PM said the deployment of Russian forces in Ukraine’s Donetsk and Luhansk regions – which Mr Putin declared as independent states on Monday night – “amounts to a renewed invasion” following Moscow’s annexation of Crimea in 2014.

“By denying Ukraine’s legitimacy as a state and presenting its very existence as a mortal threat to Russia, Putin is establishing the pretext for a full-scale offensive,” Mr Johnson added.

The PM also accused Mr Putin of plotting the “destruction of a peaceful neighbour” following his order for “peacekeeping” forces to enter the Donetsk and Luhansk regions.

“If the worst happens, then a European nation of 44 million men, women and children would become the target of a full-scale war of aggression, waged without a shred of justification, for the absurd and even mystical reasons that Putin described last night,” he told the Commons.

The PM vowed he would “not give up” in seeking a diplomatic route out of the crisis “until the last possible second”, but admitted that Mr Putin appeared “implacably determined to go further in subjugating and tormenting Ukraine”.

The five Russian banks being targeted by UK sanctions are Rossiya, IS Bank, General Bank, Promsvyazbank and the Black Sea Bank.

Promsvyazbank is described by the Foreign Office as being “pivotal” in propping up Russia’s defence sector, while the other banks are viewed as being key funders of the Russian occupation of Ukraine.

“Any assets they hold in the UK will be frozen, the individuals concerned will be banned from travelling here, and we will prohibit all UK individuals and entities from having any dealings with them,” Mr Johnson said.

Mr Timchenko is a major shareholder in Rossiya, while the Rotenbergs are described by the Foreign Office as having close ties to President Putin.

Boris Rotenberg is a major shareholder of SMP Bank, while Igor Rotenberg is invested in Russia’s transport sector.

All three have been on the US sanctions list for a number of years as associates of Mr Putin.

The Foreign Office later announced an intention to sanction those members of Russia’s parliament who voted to recognise Donetsk and Luhansk as independent.

See also  What Is Millie Bobby Brown's Net Worth?

And, over the coming weeks, territorial sanctions already imposed on Crimea will also be extended to those two regions.

This will mean no UK individual or business will be able to deal with Donetsk and Luhansk until they are returned to Ukrainian control.

The PM said more UK sanctions would be deployed alongside the US and the EU if the Ukraine crisis “escalates still further”.

On Tuesday, Germany announced it had halted the approval of the Nord Stream 2 gas pipeline, which runs under the Baltic Sea from Russia to Germany, in response to Mr Putin’s actions over Ukraine.

The PM has frequently urged European economies to end their reliance on Russian gas and oil.

“We should steel ourselves for a protracted crisis,” Mr Johnson told the Commons.

“The UK will meet this challenge side-by-side with our allies, determined that we will not allow Putin to drag our continent back into a Hobbesian state of nature, where aggression pays and might is right.

“And it is precisely because the stakes are so high that Putin’s venture in Ukraine must fail, must ultimately fail and be seen to fail.”

The PM promised that Britain “will not waver in our resolve” in supporting Ukraine.

Labour leader Sir Keir Starmer welcomed the sanctions announced on Tuesday but said the UK “must be prepared to go further”.

“I understand the tactic of holding back further sanctions on Putin and his cronies to try and deter an invasion of the rest of Ukraine,” he told the Commons.

“But a threshold has already been breached; a sovereign nation has been invaded in a war of aggression based on lies and fabrications.

“If we do not respond with a full set of sanctions now, Putin will once again take away the message that the benefits of aggression outweigh the costs.”

Sir Keir called for Russia to be excluded from financial mechanisms like Swift, for trading in Russian sovereign debt to be banned, for the Russia Today broadcaster to be “prevented from broadcasting its propaganda around the world”, and for the UK and European allies to ensure Nord Stream 2 is cancelled.

The SNP and Liberal Democrats joined Labour’s call for the government to go further on sanctions, while a number of Conservative MPs also pressed the PM on what extra measures could be introduced.

The campaigner Bill Browder, who has lobbied for tougher sanctions on Russian human rights violators around the world, described the measures announced by Mr Johnson as “pretty tepid”.

The PM addressed the Commons after chairing a meeting of the government’s emergency COBRA committee at 6.30am this morning.

Russia’s ambassador to the UK, Andrey Kelin, was summoned to the Foreign Office on Tuesday morning in order to hear the UK’s formal protest over Mr Putin’s actions over Ukraine.

Ruben Randall - October 28, 2022 0
Celebrity
Maya Jama was among the attendees as the Fashion Trust Arabia Prize in Qatar on Wednesday evening amid ongoing controversy surrounding the country.The new...

Report: Lakers have interest in Fred VanVleet and Kyle Lowry