The announcement fell in between the Warriors and the rival Celtics advancing to the 2022 NBA Finals, but the Lakers have finally hired their new coach.

Former Milwaukee Bucks assistant Darvin Ham was offered the job last week and since the news broke, many players have shared their excitement on the news.

Some fans are unsatisfied with the hire, believing that the Lakers job, especially with it’s current roster, is too high-profile of a position for a first-time head coach.

However, Ham has what none of the other final three candidates for the job had: experience as a player in the NBA.

Ham played in the NBA from 1996 to 2005, with the Denver Nuggets, Indiana Pacers, Washington Wizards, Milwaukee Bucks, Atlanta Hawks, and Detroit Pistons. He won a championship with the latter in 2004, ironically defeating the Shaq and Kobe Lakers in the Finals.

Ham grew up in Saginaw, Michigan. At the time, Saginaw, Detroit, and Flint had the highest violent crime rates in the state. He was raised in a blue-collar family with their home located directly behind a liquor store and nightclub. Growing up, Ham heard parties, gunshots, and fights on a nightly basis. But none of those experiences prepared him for what would happen when he was 14 years old.

On April 5, 1988, Ham and his brother went out for a pizza. As they drove out of a nearby parking lot to turn onto their street, they heard gunshots and suddenly found themselves in the middle of a crossfire. Ham remembers a guy running towards their car, with three others following and shooting at him. Ham was shot in the jaw, and the bullet got lodged in the back of his neck.

Ham was operated on and the doctor was able to successfully remove the bullet, eventually handing it to Ham, telling him how lucky he was to still be alive.

“I could have been dead so easily,” Ham told reporters back in 2011. “It set a foundation in me to never take anything for granted. So I’m not afraid of failure, or success. I’m only afraid of not being authentic.”

He was a football player in high school

Ham played football in high school and never really took basketball seriously. As a freshman he was 5-feet, 9-inches tall. But by the time he was a senior, he had grown nearly a foot to 6-feet, 7-inches.

“My transition from football to basketball had a lot to do with my growth spurt,” Ham told the media in 2011. “I got taller, but not heavier. I was very skinny during my senior year so I decided to give up football.”

Ham only played one year of basketball in high school, but it was enough to get him a scholarship to play at Texas Tech University in 1993. 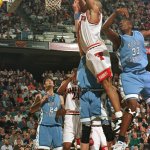 17 Mar 1996: With this dunk, Darvin Ham of Texas Tech ties the score 16-16, and halts the game at 12:06 in the first half against North Carolina when he shattered the back board during the second round of the NCAA East Regionals at the Richmond Coliseum

While at Texas Tech, Ham gained national notoriety when he threw down a thundering dunk during the 1996 NCAA Tournament against the North Carolina Tar Heels that shattered the backboard. The dunk shifted the momentum of the game and carried the Red Raiders passed the Tar Heels and into the Sweet Sixteen for the first time in school history. Later that week, Sports Illustrated featured Ham and the dunk on the cover of their magazine with the headline “Smashing!” 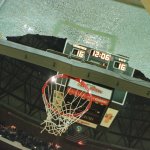 Darvin Ham of the Texas Tech Red Raiders halted the NCAA East Regional Tournament game in the first half with a backboard shattering dunk at the Richmond Coliseum in Richmond, Virginia. The Red Raiders went on to defeat the Tar Heels 92-73

Undrafted, but not deterred

In the summer of 1995, Ham went to go play pick up ball in Houston with his former roommate Mark Davis. According to Ham, many NBA players would show up to play pick-up basketball including Sam Cassell, Robert Horry, Nick Van Exel, Kenny Smith, Hakeem Olajuwon, and Moses Malone. Ham said he wanted to guard all of these legendary players in order to prove he could play in the NBA. However, he went undrafted in the 1996 NBA Draft.

Ham had a son while he was in high school and needed to provide for his family, so he joined the Jacksonville Barracudas of the United States Basketball League after the draft. His team won the USBL championship and it got him an invite to the Denver Nuggets Summer League team where he eventually made the team for the 1996-97 season.

“I was playing basketball and trying to succeed for a whole different reason than most,” said Ham in 2011. “I had to feed my kid. I wasn’t worried about the spoils of basketball.” 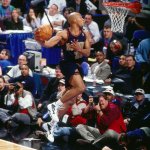 Darvin Ham #35 of the Denver Nuggets soars for a dunk during the 1997 Nestle Crunch Slam Dunk Contest on February 8, 1997 at the Gund Arena in Cleveland, Ohio. Copyright 1997 NBAE (Photo by Jeff Reinking/NBAE via Getty Images)

Avery Johnson Convinced Him to Become a Coach

Former San Antonio Spurs point guard Avery Johnson was in the middle of his first head coaching job in the NBA with the Dallas Mavericks in 2007. Ham was part of the Mavericks that year during training camp, but he was surprisingly but by the team just before the season began. Initially, he figured he would just become a free agent and sign with another team, but Johnson had other plans in mind for Ham.

Johnson noticed that during training camp Ham had been working and mentoring a lot of the younger players on the Mavericks. Instead of continuing in the NBA, Johnson convinced Ham to try his hand at coaching. A few months later, Ham was hired as an assistant by the New Mexico Thunderbirds and his coaching career began.

He would eventually become the head coach of the Thunderbirds before his old friend Mike Brown hired him as an assistant coach with the Los Angeles Lakers in 2011.

“I fell in love with it,” said Ham of coaching. “being that close to the game without playing suited me just fine.” 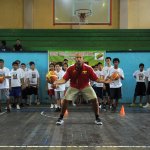 This picture taken on August 29, 2012 shows NBA Los Angeles Lakers’ assistant coach Darvin Ham (C) taking part in a training session with Myanmar players at a stadium in Yangon. Ham was part of a team of US ‘sport envoys’ who conducted workshops with local basketball enthusiasts as part of a program sponsored by the US State Department. AFP PHOTO/ Soe Than WIN (Photo credit should read Soe Than WIN/AFP/GettyImages)