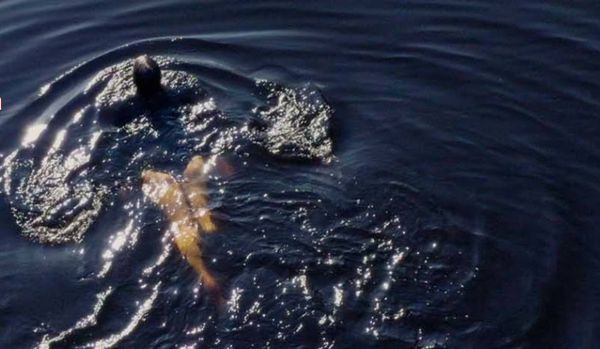 “Caitlin McMullan’s film is a delight.”

Against the deep black blue of the water, velvet dark, the swimming costume elides the torso, the arms. Hands and a head in pale contrast to the hair dark sea, the loch of locks. Bird song and boundless forest, a feel of film. The warmth of sun a memory summoned by the sight of hair on nape, that alchemy of colour by Kodachrome or CCD enough to find us miles from Venus.

Sensation abounds. The muffle of voices elsewhere, refraction and reflection. The sound of water, the sight of it, waves of waves of waves. Weeds just below the surface, and everywhere the chance to look that small bit deeper. Materiality everywhere. Red of cloth and round of glasses, the push of plastic and pliant flesh against the giving stems of green grasses.

Caitlin McMullan’s film is a delight. Leveraging Kirstin McMahon’s camerawork and Joe Howe’s sound to create something as much of process as poesy, it transports. Like other films at 2022’s Glasgow Short Film Festival it benefited from descriptive subtitles by Matchbox Cineclub’s Cinesub scheme. Not so much in terms of clarity, though that contributed, as the addition of another interpretative lens. The act of reading, of seeking, of sensing is one of the true delights of film. One might call this documentary because the things it shows happened, but by the same lack of generosity one might recall also seeing daffodils on one’s wanderings. A word’s worth is more than its initial meaning. Here too, that first step is a swim, but from that, title and all, come great leaps.

In tone, literally so in places with its minimalist musics, this is a thing of contemplation. The essence of Romantic literature can be distilled to a moment of beauty, recalled at leisure, but in that cold calculation there is room between the engineering of intent and the sweep and curve of poetry. Archly supported, vaulting upwards. There is a variety of technique here, not just the strokes of that titular swim but camera above and below the water. Credits for safety and drone pilots speak not just to accessibility but ambition. The water may at times be still but running deeply throughout this are opportunities to see and from that seeing feel.

A first film for McMullan, the enveloping environment was compelling enough a small screen that I cannot but envy those who saw it on a larger one. The transporting capacity of film here to see. Not just the cold mechanics of that station wagon full of video tapes on some virtual highway, but the deeper sense of meaning that reaches out beyond encoding to elicit and invoke. Waves themselves may generate interference but they carry with them tides of inference, the ripple of the hand-made and the residue of the heart-felt. As a first step, First Step Swim is a clear indicator of talent, and through the strength of its strokes McMullan will hopefully get the chance to make further splashes.

Ruben Randall - June 8, 2022 0
Money
With the No. 41 overall pick in the 2022 NFL Draft, the Seattle Seahawks selected running back Kenneth Walker III out of Michigan State....