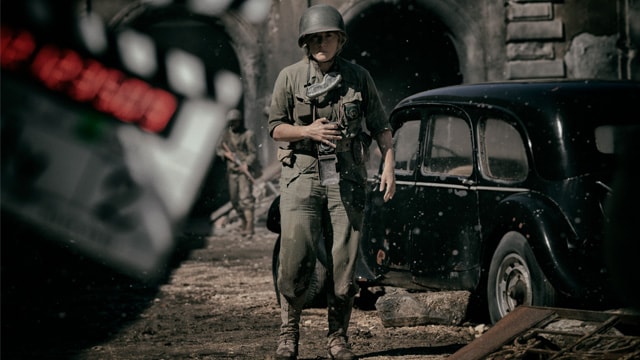 Today, Sky and the producers of Lee, released the first official image of Kate Winslet as Lee Miller. The image, shot during filming on location in Croatia, shows Winslet as the pioneering American war correspondent and photographer who covered WWII in Europe for British Vogue.

Filming is currently underway on the directorial debut from acclaimed cinematographer Ellen Kuras. The film is not a biopic, instead it explores the most significant decade of Lee Miller’s life. As a middle-aged woman, she refused to be remembered as a model and male artists’ muse. Lee Miller defied the expectations and rules of the time and travelled to Europe to report from the frontline. There, in part as a reaction to her own well-hidden trauma, she used her Rolleiflex camera to give a voice to the voiceless. What Lee captured on film in Dachau and throughout Europe was shocking and horrific. Her photographs of the war, its victims and its consequences remain among the most significant and historically important of the second world war. She changed war photography forever, but Lee paid an enormous personal price for what she witnessed and the stories she fought to tell.

Kate Winslet, Producer says, “To me, she was a life force to be reckoned with, so much more than an object of attention from famous men with whom she is associated. This photographer, writer, reporter, did everything she did with love, lust, and courage, and is an inspiration of what you can achieve, and what you can bear, if you dare to take life firmly by the hands and live it at full throttle.”

Julia Stuart, Director of Original Film at Sky says, “Sky is honoured to bring Lee Miller’s wartime journey to screens across the UK. Lee Miller was an utterly unstoppable woman, whose timeless story is as relevant now as it was in her day, and there is no one better suited to that role than the masterful Kate Winslet.”

The multi-award-winning creative team includes Director of Photography, Pawel Edelman (The Pianist, Ray), Production Designer, Gemma Jackson (Aladdin, The Gentlemen), Costume Designer, Michael O’Connor (Jane Eyre, The Duchess), Hair and Make-up Designer, Ivana Primorac (Darkest Hour, The Crown,) and Music composed and conducted by two-time Academy Award winning composer Alexandre Desplat (The Shape of Water, The Grand Budapest Hotel). Lee is written by Liz Hannah, Lem Dobbs, John Collee and Marion Hume and is based on “The Lives of Lee Miller” by Antony Penrose who serves as a consultant to the production.

The Lives of Lee Miller by Antony Penrose is published by Thames & Hudson.

Born in Poughkeepsie, New York, Lee became a model for Vogue and Vanity Fair magazines before moving to Paris to study photography with Man Ray.

Lee set up her own photographic studios in Paris and New York prior to marrying Aziz Eloui Bey and relocating to Cairo. A chance meeting with Roland Penrose led her to move to London at the outbreak of WWII. Her Surrealist images along with her pack shots, portraits and extraordinary WWII photographs have earned her a key place in the history of art. Lee Miller is one of the most fascinating figures of 20th century photography.

Farleys, her post war Sussex home is the centre of the Lee Miller Archives which cares for her photographs, papers and ephemera. The archives loans and curates exhibitions, licenses images for reproduction and produces Lee Miller prints. Farleys House and Gallery are open to the public April to October each year.

The Lives of Lee Miller by Antony Penrose (£12.99, Thames & Hudson). Described by the Sunday Times as ‘a fascinating revelation of an adventurous and protean spirit’, Penrose’s tribute to his mother brings to life a uniquely talented woman and the turbulent times in which she lived.

Sky Cinema is the home of Sky Original films, with brand new films launching every month alongside an unrivalled range of the latest cinema releases and on demand library.

Sky is Europe’s leading media and entertainment company and is proud to be part of Comcast Corporation, a global media and technology company that connects people to moments that matter. Across six countries, Sky connects 23 million customers to the best entertainment, sports, news, and arts and to our own award-winning original content.

Following the launch of Sky Glass, we now offer customers our strongest ever line-up of products and services. As well as the new streaming TV with Sky inside and everything integrated, customers can enjoy the award-winning Sky Q with all your favourite channels and apps in one place, and with Sky Go you can now access an even better experience on your devices. Sky TV has new channels, new shows and new deals with Peacock, Paramount+ and more. Sky Mobile was voted Best Pay Monthly and Best Value Pay Monthly network by Uswitch, and with Sky Broadband we’re offering our fastest speeds yet. Building on the success of Sky Originals like Chernobyl, Gangs of London and Brassic, we are doubling our investment in original content by 2024 through Sky Studios. Our new TV and movie studio, Sky Studios Elstree, is expected to create over 2,000 new jobs and generate an additional £3 billion of production investment in the UK over the first five years alone. Sky News provides impartial and trustworthy journalism for free, Sky Arts is the UK’s only dedicated free-to-air arts channel making the arts accessible for everyone and Sky Sports, our leading sports broadcasting service, brings customers some of the biggest and best global sporting events from the Premier League to Formula 1 and everything in-between. Sky Cinema is the home of Sky Original films with brand new films launching every month alongside an unrivalled range of the latest cinema releases and on demand library. We believe that we can be a force for good in the communities in which we operate. We’re committed to being Europe’s first net zero carbon entertainment company by 2030 and we’re proud to be a Principal Partner and Media Partner of COP26 – the UN Climate Change Conference. We take pride in our approach to diversity and inclusion: we’ve been recognised by The Times and Stonewall for our commitment to diversity, and we’ve set ambitious 2025 targets to continue to increase diversity and representation.  We’re also committed to investing £30million across our markets over the next three years to improve our approach to diversity and inclusion, and to tackle racial injustice.

Established in London in 2016 ROCKET SCIENCE has rapidly established itself as one of Europe’s preeminent film & TV brands. In a short time, ROCKET SCIENCE has developed, financed, packaged, produced and distributed over three-dozen critically acclaimed and commercially successful projects worth in excess of $1BN.

ROCKET SCIENCE’S reputation, comprehensive market knowledge and strong focus on corporate and project branding have propelled its rapid expansion within the entertainment and content landscape. The company’s deep and unique relationships with the creative community and talent agencies on one side and financial institutions & private investors as well as platforms, studios, independent distributors, and broadcasters on the other side make ROCKET SCIENCE one of the key players in the industry.

On the back of consistent growth, ROCKET SCIENCE continues to flourish by increasing its production footprint along with expansion into local language content creation and adding non-scripted and documentary entertainment.

Hantz Motion Pictures is a US based, women-led company that values inclusive, authentic, and quality filmmaking. Committed to uplifting underrepresented voices both in front of and behind the camera, Hantz curates projects with intentional, emotionally-driven storytelling. The studio develops, finances, and greenlights projects, working closely with filmmakers throughout the creative process.

Formed in 2021, Brouhaha Entertainment is a production company that traverses genre and convention with its diverse Film and Television slate. The alliance of three pioneering independent producers, BAFTA and Academy-nominated producer Gabrielle Tana who has been behind some of the UK’s most successful and highly acclaimed independent films of recent years, including The Dig, Philomena, The Invisible Woman, The White Crow and The Duchess. Troy Lum and Andrew Mason who have been involved in iconic cinema in their native Australia and abroad.

Their combined filmography includes titles such as Saving Mr Banks, Adoration, The Water Diviner, The Matrix and Dark City. The company is based in two hemispheres and has access to top talent and finance throughout the UK, Europe, USA, Australia and Asia. Brouhaha Entertainment receives backing from the Calculus Creative Content EIS Fund, launched in 2019 to support British indie firms.

Led by CEO Jason Duan and Executive Producer Wen-Chia Chang, Pasaca Entertainment’s goal is to reinvent traditional genres and empower underrepresented groups in entertainment. A global content provider and studio with services including development and production of individual projects.

The production company is behind family drama TIFF 2022. The Prisoner’s Daughter, Pasaca’s first feature film which follows a dying convict (Brian Cox) who tries to reconnect with his daughter (Kate Beckinsale) and grandson (Christopher Convery). Pasaca co-financed Director Catherine Hardwicke’s film, starring Jon Huertas, Ernie Hudson and Tyson Ritter, which had its world premiere at the Toronto Film Festival.The roster of the company’s fully funded original content will be announced shortly along with additional co-funded productions.

Juggle Productions is the company set up by actor and producer Kate Winslet. After 30 years of acting in films whilst largely raising her children, Winslet formed ‘Juggle’ as her way of acknowledging and supporting the phenomenal amount that women in film and television are capable of achieving, whilst juggling family life and maintaining creative integrity. The company is committed to telling stories that have women, courage and truth at their core. After participating in Mare of Easttown (HBO) and more recently ‘I am Ruth’ (a mother’s battle with her teenage daughter’s mental health, for Channel 4), ‘Lee’ is the company’s debut feature, alongside its active development slate.

55 Films is the production banner of Kate Solomon. Kate is an esteemed producer and writer whose Oscar® and BAFTA nominated films include collaborations with Paul Greengrass, Stephen Frears, Brian Helgeland, and José Padilha. Kate specialises in true-life stories. She began her career in documentaries directing and producing for Channel 4, BBC and PBS. In 2005 she moved into features, and for the next six years worked with director Paul Greengrass. Their collaborations included the Oscar® nominated United 93, about the fourth hijacked plane on 9/11, and Green Zone, set against the Iraq war, starring Matt Damon. She set up independently in 2011. Kate’s subsequent producing credits include Stephen Frears’ Lance Armstrong film The Program; Brian Helgeland’s Legend starring Tom Hardy as both Kray twins; and José Padilha’s 7 Days in Entebbe about the 1976 hijacking, starring Rosamund Pike and Daniel Bruḧl.

Ruben Randall - May 27, 2022 0
Money
The Comedian, Dave Chappelle, was in the news after an armed man attacked him onstage during his performance at Los Angeles’ Hollywood Bowl arena....