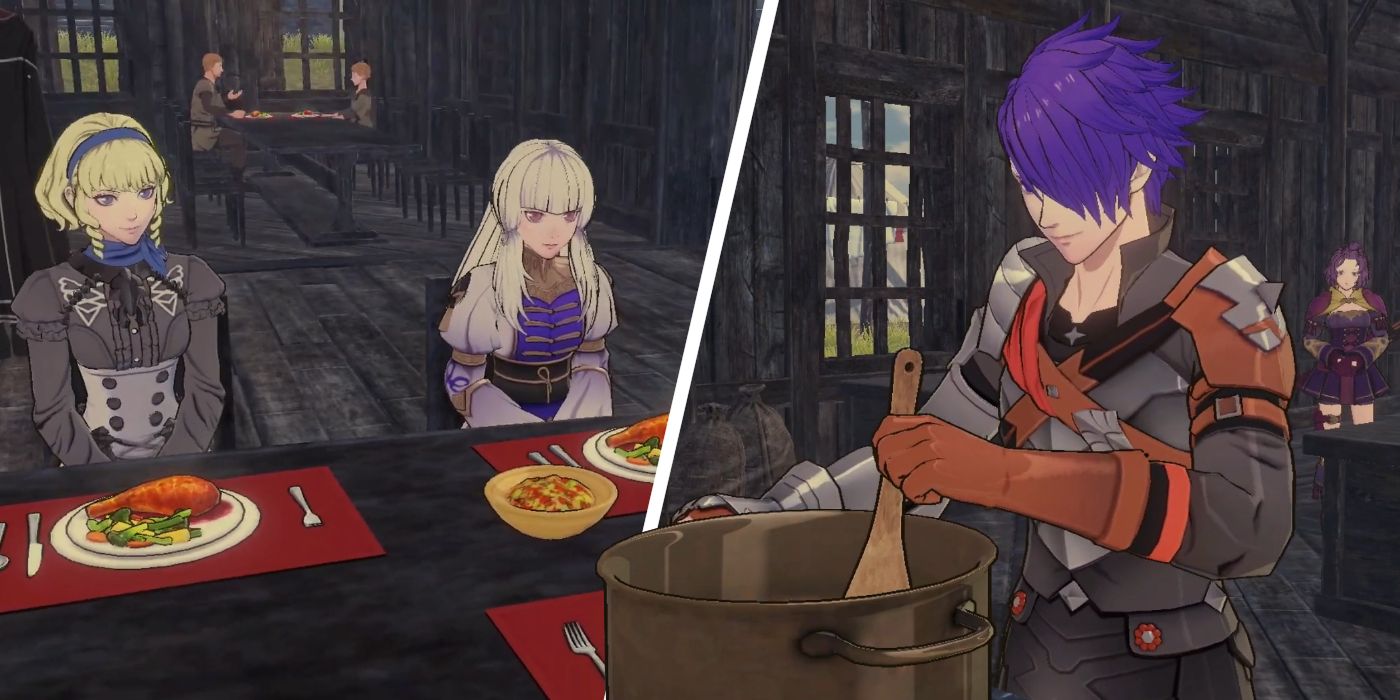 After reaching Chapter 4 in Fire Emblem Warriors: Three Hopes, players can partake in cooking, an activity that provides units with combat buffs.

Cooking is a mechanic in Fire Emblem Warriors: Three Hopes that players can participate in to give their characters a variety of combat buffs and benefits, including increasing unit Morale. The protagonist will gain access to cooking once they complete the first side quest of Chapter 4, depending on what storyline they’ve selected. During this quest, players will be tasked with helping the Chore Master in Fire Emblem Warriors: Three Hopes, after which they’ll be led to the Recreation Quarter, where they can learn the basics about cooking meals for allies.

The effects of cooked meals in Fire Emblem Warriors: Three Hopes will last until the end of a chapter. Accordingly, the protagonist should attempt to give their strongest or favorite characters meals at the earliest activity point. Furthermore, the buffs stack, allowing players to cook multiple meals for the allies, maximizing the beneficial status effects provided for their characters. Keep in mind that meal effects apply to all units regardless if they were selected as Meal Companions. The primary reason players can choose specific characters is so they can boost support points for those particular units.

Related: How To Get Strategy Resources in Fire Emblem Warriors: Three Hopes

To get started, head to the Recreation Quarter and talk to the Kitchen Master in Fire Emblem Warriors: Three Hopes. Choose “Cook a Meal” to view a Menu, which displays a wide selection of recipes for players to cook. Below the Menu are the Active Meal Effects for the dish.

See also  10 Best Casts In Bad Movies, According To Ranker

How To Cook In Fire Emblem Warriors Three Hopes

Naturally, all recipes will not be available at the start of Fire Emblem Warriors Three Hopes. As the protagonist progresses through the main campaign, they will unlock more meal options, including access to more ingredients. Cooking ingredients can be procured from the Item Shopkeeper or completing quests and purchasing them in exchange for the earned rewards.

Not all dishes are cooked equally in Fire Emblem Warriors Three Hopes. Players must take several steps to ensure their meal reaches at least Great or Perfect to get the highest benefits out of the dish. There are two primary ways to increase one’s chances of cooking a Perfect meal. First, choose Meal Companion characters in Fire Emblem Warriors with a blue up arrow icon beside their avatar. This icon indicates that they have a higher possibility of helping the protagonist achieve a Perfect meal. Next, expanding the Recreation Quarter and Training Grounds can also influence whether a player receives a Perfect score in cooking. Thus, be sure to gather the necessary materials for upgrading the Recreation Quarter.


Senior Game Guides Writer for ScreenRant, Ethan Webb has been writing about video games professionally since 2021 but has been an avid gamer since childhood. With Super Mario Bros. as the first title he’s ever played, he enjoys various genres, from platformers and FPSs to RPGs and even visual novels. As a child in a military household, Ethan was constantly on the move, traveling from country to country, experiencing a wide variety of cultures and lifestyles. This process has given him a broader and multi-cultural outlook on life, a characteristic that influences his writing and perspective on the gaming medium as a whole. After studying for four years at Yeungnam University of South Korea, Ethan received his Bachelor’s in 2020, double-majoring in Business Administration and Media & Communication. Now, as a content writer, his lifelong dream is someday to have a direct role in the gaming industry, and he works towards this goal by currently writing for engaging sites such as SR.