For members of Orange County’s surf scene, Duke Paoa Kahanamoku — a native Hawaiian known as “The Big Kahuna” and the father of modern surfing — is a legend whose influence has reverberated throughout the local community for nearly a century.

Now, his legendary story is being told in a feature-length documentary “Waterman,” which opens Friday in select theaters in Huntington Beach, Orange, Long Beach and Los Angeles during a weeklong release.

Born in 1890 in Honolulu, Kahanamoku grew up on pristine beaches that honed his prowess at surfing and swimming. As a young man, his first encounters at timed swimming would reveal record-breaking talents that would take him all the way to the Olympics, where he would earn five medals in 1912, 1920 and 1924.

A trailblazer, he appeared in numerous Hollywood films before his death in 1968, at a time when actors of color were scarcely depicted.

“Duke is not only a Hawaiian icon but an American icon who transcended barriers,” said Rocky McKinnon, a local surfer, instructor and board shaper who grew up hearing stories about Kahanamoku.

“A lot of people in my community know him but, in American history, he needs to be in the same realm as Martin Luther King, Jr, Muhammad Ali and Jesse Owens,” he continued. “He was a groundbreaking person.” 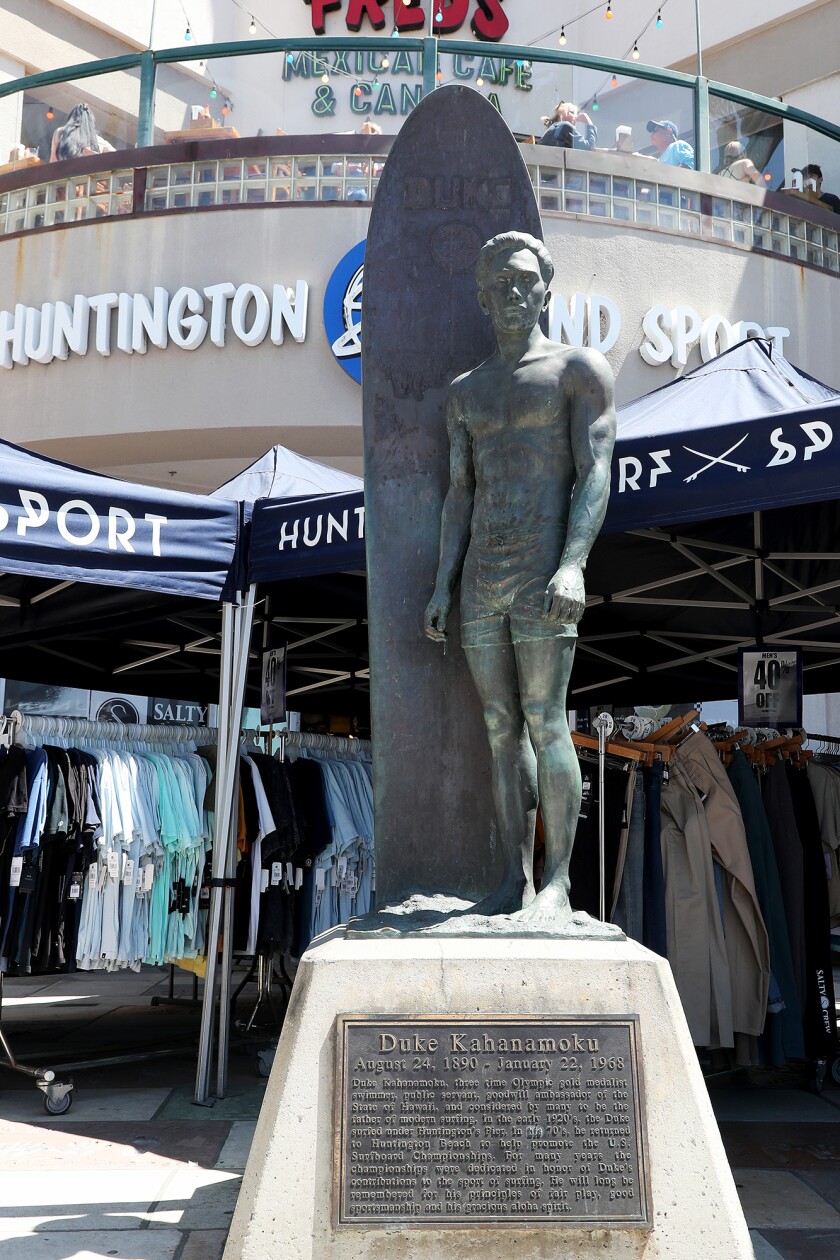 In Huntington Beach, a statue in the city’s downtown area depicts a young Kahanamoku in swim attire, his board at the ready. It joins tributes erected in Hawaii, Australia and New Zealand.

Nearby, a popular restaurant — Duke’s Huntington Beach — pays homage to the surfer who, while living in Newport Beach in 1925, famously rescued eight people from a sinking vessel in Corona del Mar from atop his board and went back to retrieve the bodies of those who didn’t survive.

“Waterman” aims to tell the full story behind the life and times, challenges and achievements of the man dubbed the “Ambassador of Aloha.”

Produced by Sidewinder Films, and with actor Jason Momoa narrating, the film came to life under the direction of Isaac Halasima, a Polynesian music video director who was turned onto the idea years earlier by maternal uncle and artist Jan Gordon Fisher. “Things were really moving forward for me, and my uncle told me I should do this story,” Halasima, 43, said Tuesday from his home in Utah.

“He knew I knew the story because he’d told me the story. Shortly after that he passed away — I was sitting there at his funeral, and I couldn’t get it out of my head.”

The director subsequently discovered, and devoured, a 2015 book, “Waterman: The Life and Times of Duke Kahanamoku,” by author David Davis, which provided a comprehensive biography from which to build a compelling personal narrative.

Footage from a 1957 episode of the TV show “This is Your Life,” in which Kahanamoku is greeted by voices and characters from his storied past creates a storytelling arc that drives the film.

A still from the movie “Waterman” depicting a 1925 rescue at Corona del Mar Beach.

“I wanted people to feel like they were watching Superman because, to me, that’s who he is,” Halasima said. “This man didn’t need to love the country he represented. He was born when Hawaii was a kingdom, after it had fallen, and he could have been angry. Instead, he became one of Hawaii’s warriors.

The film dives into Kahanamoku’s deep and abiding “Aloha spirit,” which takes the Hawaiian word beyond its use as a customary greeting into a realm where a willingness to share one’s very essence with another crystallizes into a world view and way of living. 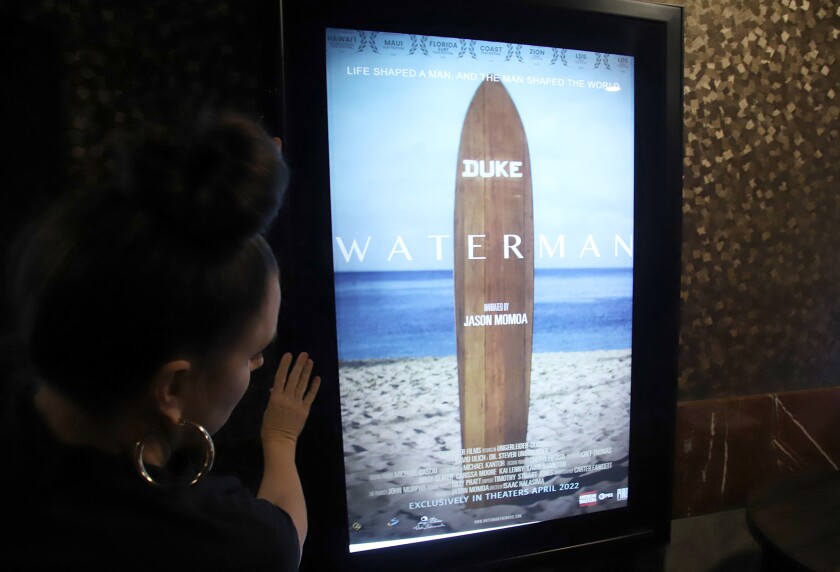 “Duke’s spirit really came through in this film,” said producer David Ulich. “He dealt with racism and economic hardship — still, he really did spread the spirit of Aloha. It has this deep meaning of connection, friendship and, ultimately, love.”

A special screening of “Waterman” took place Tuesday at Century Huntington Beach and XD, a theater in the Bella Terra shopping center, where the movie will begin a one-week run on Friday.

Fountain Valley resident Lucy Corey saw the film and is now spreading the word to everyone she knows. 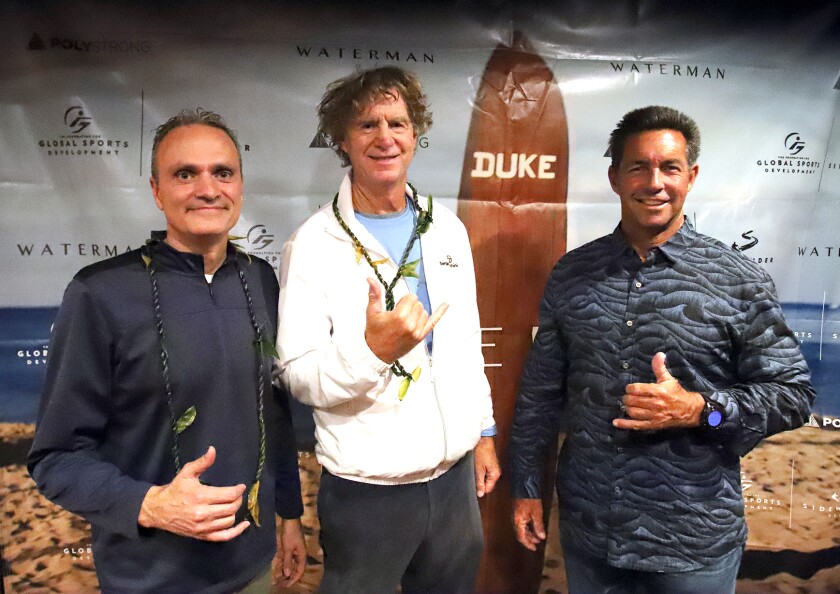 “I know Duke from stories — he’s this wonderful guy who brought everyone together. But the deep, personal accounts in this movie were really incredible,” she said.

“He was breaking down barriers way before his time. In today’s world, this message is so important I want to broadcast it across the sky.”

McKinnon, who also made an appearance at Tuesday’s screening, agrees.

Support our coverage by becoming a digital subscriber.

1 of Kelly Bishop’s Favorite Scenes With Edward Herrmann Is a Sweet Moment Between...

Ruben Randall - September 9, 2022 0
TV/Movies
Hulu has confirmed that The Handmaid's Tale has been renewed for season 6, which will also be its last. Based on the Margaret Atwood...