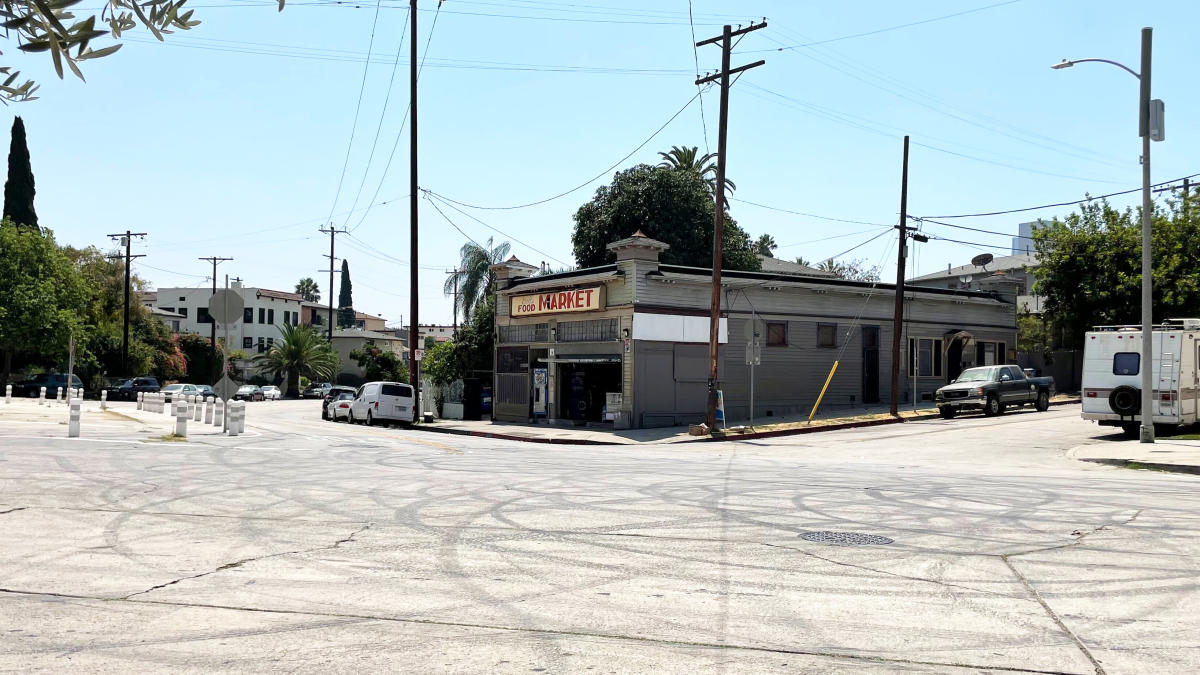 “Fast and Furious” fans around the world are excited for the return of the franchise with the 10th installment, “Fast X,” next April. The residents of Los Angeles’ historic Angelino Heights neighborhood, not so much.

Ever since it premiered in 2001, “Fast and the Furious” fans have made a beeline to Angelino Heights to gawk at Bob’s Market, the store owned by the family of the film’s Dominic Toretto (Vin Diesel) and the character’s quaint Victorian house.

But unlike the nearby house where The WB series “Charmed” was shot, Bob’s Market and Dominic’s house have become a destination for more than just snapping selfies. Nearly every night, car enthusiasts spin out doing donuts at high speeds in front of the store in addition to racing and doing street takeovers throughout the area just west of Downtown.

Residents who deal with the constant noise and unsafe conditions are fed up, and are planning a protest for the “Fast X” shoot on Friday. The protest comes as anger over the effects of street racing and takeovers is at an all-time high in the city. Meanwhile, traffic fatalities and pedestrian deaths have skyrocketed during the pandemic, often caused by reckless driving and speeding. It’s become an epidemic across L.A. and the entire country — traffic deaths in the U.S. jumped 21% in the first three months of 2022 compared to 2020.

A notice of filming from FilmLA received by community members indicates that “Fast X” will shoot Friday from 9 a.m. to 2 a.m. in front of the Toretto house on Kensington Road, with “simulated emergency services activity, aerial photography, wetting down of street and atmospheric smoke.” According to a spokesperson for FilmLA, which is in charge of permits for film shooting in Los Angeles, a shooting permit has not been finalized, but the bulletins were provided to the community by the office.

“If this film shoot is allowed to go forward in Angelino Heights, or any part of it from F10 Productions (Universal) … we will stage a huge protest and will invite many reporters and news cameras to film us protesting this film shoot all day and night,” an email obtained by Variety from a resident to Los Angeles City Council reads. “We will hold this protest to honor the 178 people who have been killed by street racers in Los Angeles, and to shame Universal for their callous disregard for this deadly epidemic of street racing their films started and continue to promote.” No further details about the protest were available.

Speaking to Variety, several residents of Angelino Heights explained that their issue with “Fast and Furious” has less to do with the one-day film shoot itself than the impact that the films have on the neighborhood year-round.

Hellen Kim and Robert Howard, a married couple that live close by Bob’s Market, say that the open area in front of the store draws street racers who practice donuts and ramp up their engines, creating noise and smoke. Although the city erected some bollards in the area, many of the drivers simply moved to a nearby street or continue to drive around the barriers. And when they do so, because some of the cars don’t have mufflers, the noise tends to be extremely disruptive, with screeching tires throughout the night. 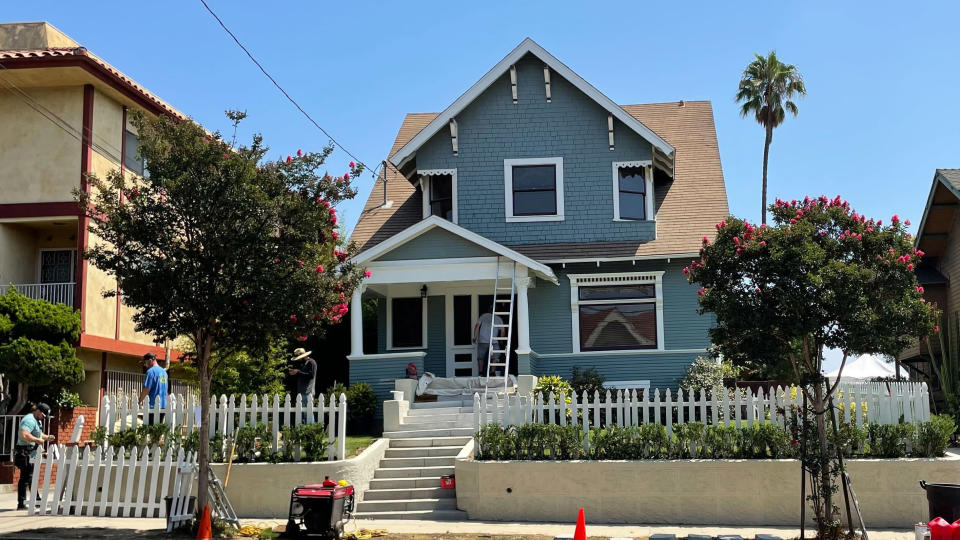 “Our mom stays with us, she’s 90, she gets scared at night with this kind of sound,” Howard says. “There’s kids in the neighborhood right on that corner. It shouldn’t be allowed.”

Kim says that while driving in the area, several of the racers have hit or crashed into cars. Additionally, she says she’s witnessed several of the drivers speeding away after the collision, leaving the owner to deal with the consequences.

“Someone’s going to get killed,” she says. “Sooner or later.”

One resident, who did not want his name used, told Variety that he once had a gun pointed at him by a “Fast and Furious” fan after he asked him to stop running his car in the middle of the day.

“In the middle of the daytime I’m trying to work in my office, somebody’s whipping around making all kinds of noise with their car, and I come out and I’m yelling, ‘Would you do this in front of your grandma’s house?’ And some kid’s like, ‘What did you say to me?’ And pulls out a gun and pointed at me,” the resident says. “I’m standing on my porch and he’s on the opposite side of the street. So I wasn’t scared for my life. But anytime someone pulls a gun, it’s a serious thing.”

See also  Constance Wu on Her Memoir, ‘Making a Scene,’ and How She’s Moving On

Another time, the resident and his brother-in-law got into a yelling match with other drivers in the neighborhood. A few days later, they woke up in the middle of the night to find that someone had set the trash cans in their driveway on fire, nearly burning their house down in the process.

“The fact that these people can find the actual spot and then just go torment the people living there is irresponsible,” the resident says. “Of course they (Universal) didn’t know when they made the movie that it would be such a cultural phenomenon.”

Not all residents necessarily want “Fast X” filming to cease. Longtime homeowner Planaria Price, who was instrumental in helping persuade the city to get the barriers installed in front of Bob’s Market, explains that Universal has provided her and other residents with stipends and annoyance fees, which helped her restore several of the homes in the area she owns.

According to Price, residents in the community who have complained about “Fast X” filming have already been offered fees. Although she agrees that the street racing that the films encourage is dangerous, she thinks the issue lies more with Los Angeles government and the need to crack down on street racing in the city at large.

L.A. City Councilman Gil Cedillo, who represents the area, did not respond to a request for comment.

“I don’t want filming to cease, I mean, it’s one of the most important economic things we have in Los Angeles,” Price says. “It’s just that the owner of the location has to be sure that the location people are really responsible to the neighborhood.”

The protest, which is being organized by an Angelino Heights resident who declined an interview with Variety, is supported by Street Racing Kills and Streets Are for Everyone, two advocacy organizations that focus on road safety education. Their founders, Lili Trujillo Puckett and Damian Kevitt, have both been personally affected by dangerous driving: Puckett’s 16-year-old daughter died in a crash caused by a street race, while Kevitt lost his leg after being hit by a car speeding through Griffith Park.

During the pandemic, street racing ballooned as an issue in the city overall, with races and street takeovers jumping 27% last year, according to the Los Angeles Police Department. Although Pucket explains that Universal has done some outreach to promote driving safety in the years since the “Fast and the Furious” franchise began — including a PSA she participated in a few years ago featuring franchise star Sung Kang — she says it hasn’t been far-reaching enough to combat the effects the films have had, and that Universal needs to do a bigger campaign to get the message across more strongly.

She cites several recent street racing incidents this year, including a freeway crash that killed two people in May, as a reason why the “Fast” production shouldn’t be returning to Los Angeles streets for filming.

“I feel like they should have waited maybe another year, especially with the problem being as big as it is right now,” Puckett says.

Kevitt doesn’t necessarily have a problem with car enthusiasts racing in a safe, contained environment, but it’s a different story on public streets with real-life consequences. Though “Fast” movies have gotten away from their street racing beginnings, the next installment has been said to be “returning to its roots.”

What’s happening in Angelino Heights is a result of an industry that doesn’t care about its potential consequences, Kevitt says. “That needs to change and Universal needs to step up and take responsibility for the consequences and billions of money that they’ve made off of this.”

Pat Saperstein contributed to this article.

Ruben Randall - November 1, 2022 0
TV/Movies
Peacock has entered into an agreement that brings Hallmark Media to the streaming service.Starting Nov. 2, Peacock will have a brand hub for live...

Oscar Wrap Up: National Board of Review Had No Effect on...