ACUSHNET — With ice wrapped around his left ankle, Colby Correia wasn’t feeling much pain after Fairhaven’s 10-0 six-inning win over Bristol-Plymouth on Friday night in the preliminary round of the Div. 3 state tournament at Pope Park.

The sophomore slugger went 4-for-4 with two runs scored to power the No. 25 Blue Devils past the 40th-seeded Craftsmen into the Round of 32.

“He has a terrible ankle, but he has a top five batting average in the SCC,” said Fairhaven junior pitcher Luke Gomes. “He’s our most consistent hitter by far.” 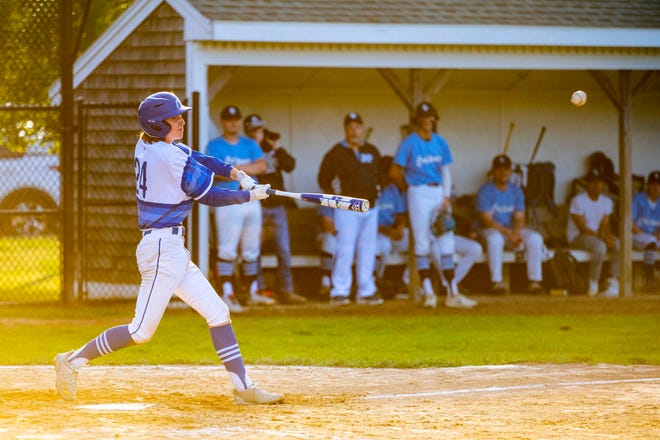 Correia had twisted his ankle sliding into second base during Fairhaven’s 5-3 win over Old Rochester on May 25 and sat out his team’s regular season finale against Sandwich.

“Losing a game in Sandwich 2-0 with his bat out of the lineup definitely would have made a difference,” said Fairhaven head coach Rudy Bulgar. “He’s been solid all year in the top middle of the lineup for us. He’s really locked in the last three weeks. There was a point where he had 12 hits and three games and you add in the four today, he’s seeing the ball really well.”

With Correia just being cleared on Thursday, Bulgar had him as the team’s designated hitter in Friday’s playoff opener.

“We were still kind of unsure going into today,” Bulgar said. “We had a game plan of seeing how he looks in his first at bat. He bounced one on the infield and got up the line pretty well. I think his second at bat, he whacked a double and got in there.” 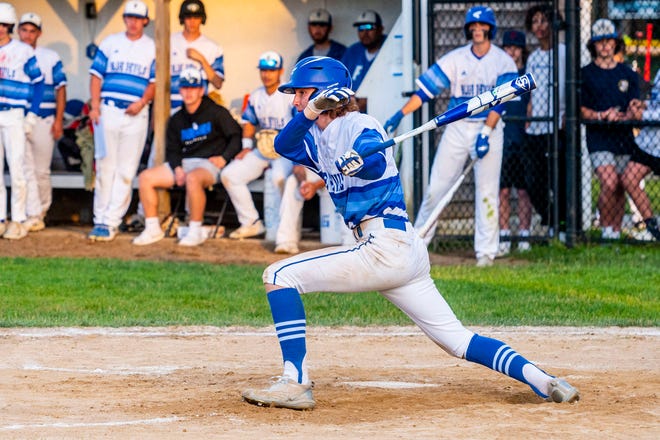 Correia finished with three singles and one double.

“My mindset was just to hit the ball first and hobble on over to the base and worry about it later when I get home,” said Correia. “It’s a little bit better. It’s all I do at home; I just ice it. Today being out here, it started to hurt a little bit more.”

Correia said it meant a lot to him to be able to play.

“I trust our team to get it done, but it was more important for me to be here for the seniors,” he said. “I didn’t want my last game with the seniors to be me hurting myself and watching them play.”

Bulgar added, “He gutted it out. I could tell he wasn’t 100%. But he’s a competitor and it was a good lift for the team today.”

2022 MIAA BASEBALL PLAYOFFS:See which 7 SouthCoast teams qualified and who they will face 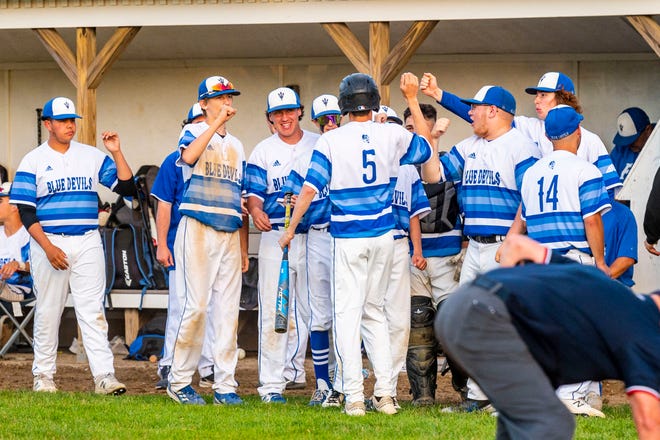 A single by Correia started things off for Fairhaven in the bottom of the first inning. Back-to-back walks by Gomes and Jack Cunha loaded the bases and Jaren Megan had an RBI single to give the Blue Devils a 1-0 lead.

After a scoreless second, Megan was in a similar position in the third with the bases loaded and no outs. This time, his shot to left drove in two runs to put Fairhaven out front 3-0. A two-RBI double by Connor Sorrel later in the inning made it 5-0. 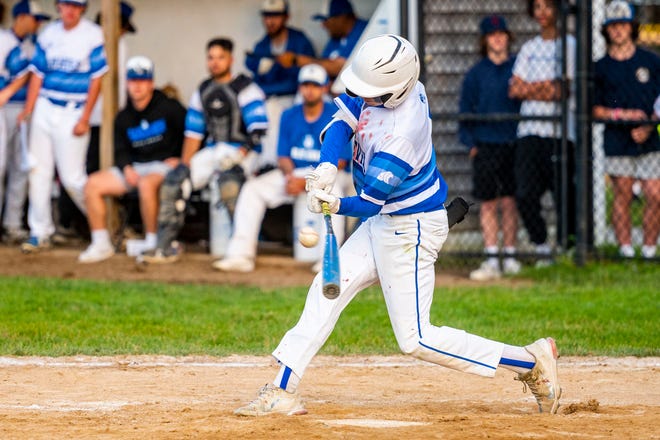 “Everyone can hit,” Correia said. “There is never a doubt in my mind that when anybody comes up, they won’t get a hit at any given moment.”

Megan had another RBI single in the fourth inning for another Fairhaven run.

“He’s been all over the lineup,” said Bulgar of Megan. “Sometimes when we’re looking for certain things in the lineup, we’ll plug him in. We like how he handles the bat.”

The Blue Devils added three runs in the bottom of the sixth with the last coming on an RBI single by Aidan Hassey to end the game. 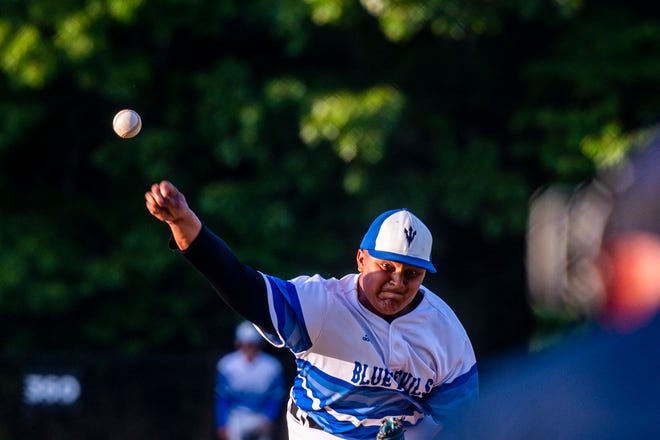 Gomes threw a complete-game seven-hitter with one walk and six strikeouts.

“The way I mixed my pitches and set them to keep them off balance, it keeps them guessing,” Gomes said. “I felt pretty good and I had a very good defense behind me. It’s been great all year.”

Bulgar added, “He’s been solid all season long. The first day he took the mound, he went five innings and he threw 63 pitches. Since then he’s been our guy.” 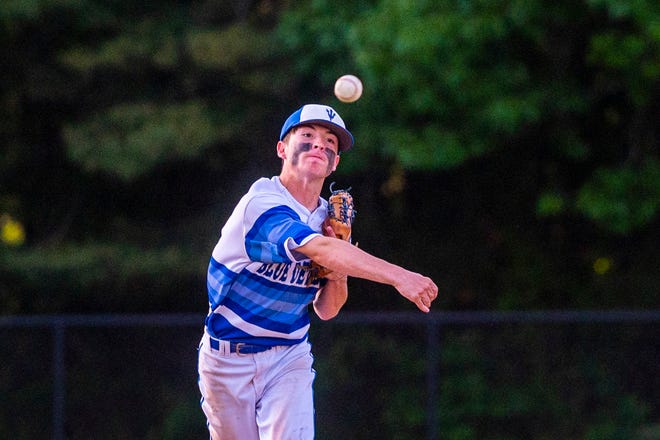 WHAT IT MEANS: With the win, the Blue Devils improve to 12-5. They visit No. 8 Gloucester (14-8) at 4:30 p.m. on Monday at Nate Ross Field in the Round of 32. Bristol-Plymouth, which finished second in the Mayflower Athletic Conference to Diman, wrapped up the season with an overall record of 15-4.

SOUTHCOASTVARSITY PLAYER OF THE GAME: Megan went 3-for-3 with a walk, four RBIs and two runs scored to power Fairhaven’s offense.

SCARY MOMENTS: Early in the game, Megan was going after a fly ball in left center field and as he attempted to catch it, the ball hit him in the face, causing his nose to bleed. “My left fielder, Jack Cunha, who is the best left fielder in the SCC, was running in for the ball and I forgot he has blazing speed,” Megan said. “He got there before me. The ball hit his glove and I lost it and it just nailed me in the face. I looked up and there was blood all over my hand. I walked in and all my coaches were like, ‘Wow, you look pretty cool.’ So I was like why not go out and hit the ball and look even cooler.” Megan had a hand in six of Fairhaven’s 10 runs, scoring a pair and driving in four more.  … In the fifth inning, Gomes got hit in his helmet by a pitch. He was OK as he jogged to first base.

See also  Watch: Park Bo Young, Seo In Guk, And More Experience A Roller Coaster Of Emotions Behind The Scenes Of “Doom At Your Service” 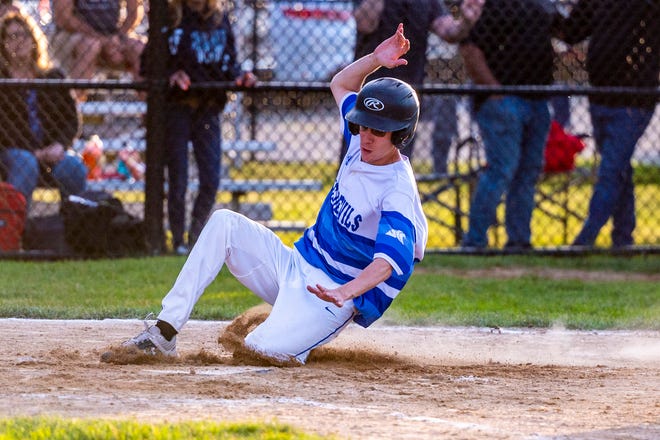 CARVALLAHO ON FAIRHAVEN: “They’re a good team. They’re solid defensively. They’re fundamental. They took advantage of our mistakes for sure.”

BULGAR: “I’m happy for all these guys. They all had a part in it.”

BRISTOL-PLYMOUTH STATS: Colin Wilbur and Brayden Alves both went 2-for-3 while Cameron Karch was 1-for-2 and Nick Hall went 1-for-3. Josiah Joyce was 1-for-1 with a walk.

NOTES: Both teams picked off base runners in the first inning. … Megan turned a double play in the fourth inning when he caught a fly ball and then got the runner out at second. … Wareham baseball coach Chris Cabe was in attendance.

Bill and Melinda Gates’ divorce is FINALIZED three months after they...