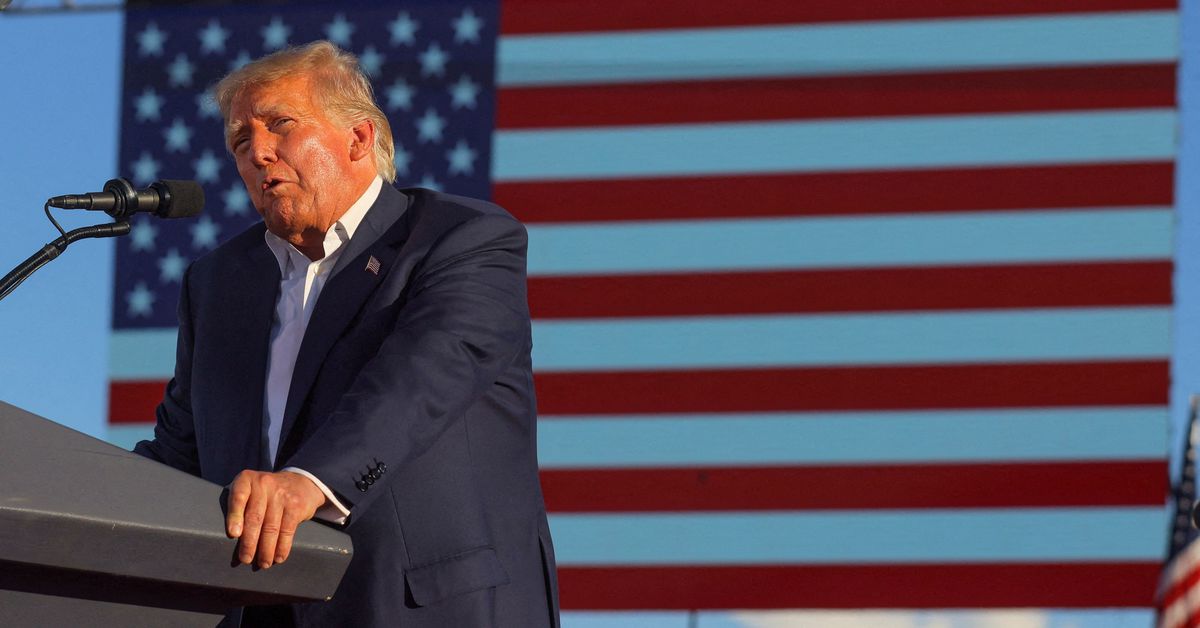 Oct 20 (Reuters) – Former U.S. President Donald Trump is facing legal scrutiny from state, congressional and federal investigators on a range of issues – from the storming of the U.S. Capitol by his supporters, to allegedly inflating the value of his properties to secure favorable loans and tax benefits.

Here is a look at some of the numerous investigations and lawsuits that Trump faces as he considers another run for the presidency in 2024.

The U.S. Justice Department is conducting a criminal investigation of Trump for retaining government records, including some marked as classified, after leaving office in January 2021. The FBI seized 11,000 documents from Trump’s Mar-a-Lago estate in Florida in a court-approved Aug. 8 search, including about 100 marked as classified. Some were designated top secret, the highest level of classified information.

The department began its investigation after the National Archives, the U.S. agency responsible for preserving government records, tried to get Trump to return missing government property and received 15 boxes with classified documents mixed in.

Trump has accused the Justice Department of engaging in a partisan witch hunt.

A so-called special master, Senior U.S. District Judge Raymond Dearie, is reviewing the seized documents to determine whether any are protected by attorney-client privilege or by executive privilege, a legal doctrine under which a president can keep certain documents or information secret.

The Justice Department is also asking a federal appeals court to end that review and to let them access unclassified materials taken in the search, arguing that both measures are hindering their criminal investigation.

New York Attorney General Letitia James said in a civil lawsuit filed last month that her office uncovered more than 200 examples of misleading asset valuations by Trump and the Trump Organization between 2011 and 2021. James accused Trump of inflating his net worth by billions of dollars to satisfy loan terms and get better insurance coverage. read more

James is seeking to permanently bar Trump, his sons Donald Trump Jr. and Eric Trump and his daughter Ivanka Trump from running companies in New York state, and to prevent them and his company from buying new properties and taking out new loans in the state for five years. James is also seeking to have the defendants disgorge around $250 million that she described as obtained through fraud.

James said her probe also uncovered evidence of criminal wrongdoing, which she referred to federal prosecutors and the Internal Revenue Service for investigation.

The Trump Organization is set to go on trial on Oct. 24 on New York state criminal tax fraud charges. Its former chief financial officer Allen Weisselberg, also named as a defendant in the James lawsuit, has pleaded guilty and is required to testify against the company as part of his agreement with prosecutors. read more

Alvin Bragg, the Manhattan district attorney, has also been investigating whether Trump misled lenders and others about asset valuations. Trump has denied wrongdoing and called the probe politically motivated.

E. Jean Carroll, a former Elle magazine writer, sued Trump for defamation in 2019 after he denied her allegation that he raped her in the 1990s in a New York City department store. Trump accused her of lying to drum up sales for a book.

Trump appeared on Wednesday for a deposition in the case, according to his and Carroll’s lawyers. read more

In a letter made public on Sept. 20, a lawyer for Carroll said she also plans to sue Trump for battery and intentional infliction of emotional distress under a new state law in New York giving adult accusers a one-year window to bring civil claims over alleged civil misconduct regardless of when it occurred. read more

A lawyer for Trump has argued that he is protected by a federal law that makes government employees immune from defamation claims. Trump was president at the time the lawsuit was filed.

The Manhattan-based 2nd U.S. Circuit Court of Appeals said last month that Trump was a federal employee when he called Carroll a liar, but left open the question of whether he was acting as president when he made the statement to a Washington, D.C., appeals court. read more

A House of Representatives committee investigating the Jan. 6, 2021, assault by Trump supporters on the U.S. Capitol is investigating whether he broke the law in actions taken to try to overturn his 2020 election defeat. The rioters sought to block Congress from certifying the election results.

The committee unanimously voted last week to subpoena Trump as part of its probe. Trump could face a misdemeanor charge if he does not comply. The former president could also challenge it in court, as he has done with other subpoenas, which would likely tie the matter up in litigation until the committee concludes its work. read more

Committee vice chair Liz Cheney has said the committee could make multiple referrals to the Justice Department seeking criminal charges against Trump, who has accused the panel of conducting a politically motivated sham investigation. read more

The committee cannot charge Trump with federal crimes. That decision must be made by the Justice Department, led by Attorney General Merrick Garland. The panel is expected to issue a written report on its findings in the coming weeks.

A special grand jury was selected in May to consider evidence in a Georgia prosecutor’s inquiry into Trump’s alleged efforts to influence that state’s 2020 election results. read more

The investigation focuses in part on a phone call Trump made to Georgia Secretary of State Brad Raffensperger, a Republican, on Jan. 2, 2021. Trump asked Raffensperger to “find” the votes needed to overturn Trump’s election loss.

Trump could argue he was engaging in constitutionally protected free speech.

A California federal judge said on Wednesday in a separate lawsuit that Trump had knowingly made false voter fraud claims in a Georgia election lawsuit, according to emails the judge reviewed. read more

It is not immediately clear what ramifications Trump could face from the ruling.

Reporting by Luc Cohen in New York and Jacqueline Thomsen in Washington; Editing by Ross Colvin, Will Dunham and Daniel Wallis

Reports on the New York federal courts. Previously worked as a correspondent in Venezuela and Argentina.

Jacqueline Thomsen, based in Washington, D.C., covers legal news related to policy, the courts and the legal profession. Follow her on Twitter at @jacq_thomsen and email her at [email protected]

Ruben Randall - August 11, 2022 0
Celebrity
Tonight is the night SYFY’s hit alien comedy-drama Resident Alien returns with the last eight episodes of season two. The series is based on...