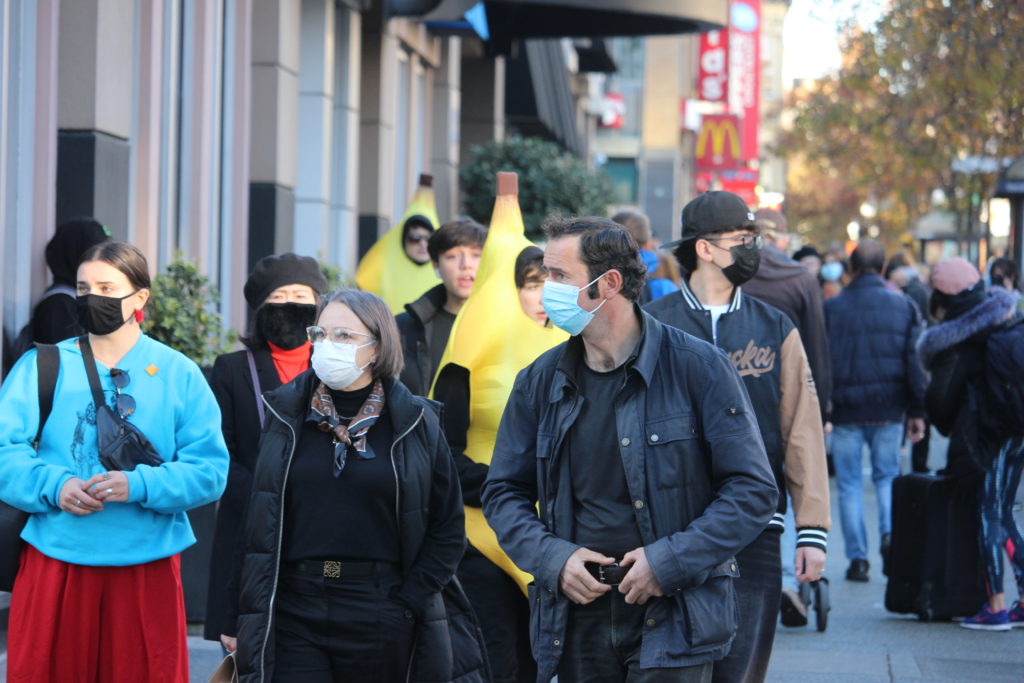 A biology expert and researcher is expressing her frustration at the ongoing messaging from public health officials about COVID-19, which she believes is misleading.

Dr. Gosia Gasperowicz, a developmental biologist at the University of Calgary, said during a Protect Our Province BC briefing Thursday that ever since Omicron hit, the messaging from public health and government officials in the western world changed from one focused on prevention to one that is keen on “pushing” infections on people.

“It almost seems that we — especially in January and February — the whole western world, switched to pushing infection on people [with] various, various misleading narratives,” she said.

Western countries and jurisdictions, according to Gasperowicz, have done that by simply telling the public that they’ll get infected with the virus one way or another — something B.C.’s top doctor once mentioned during a live briefing in December amid an onslaught of infections.

“It is anger-inducing,” said Gasperowicz, who is a member of Zero Covid Canada, a group that calls on Canada to adopt a zero-COVID strategy.

Gasperowicz believes that by pushing a message that people will get infected and there is nothing they can do about it, public health and government officials are “promoting” the spread of COVID-19. She also said herd immunity isn’t possible.

“‘It’s almost like saying to people you will get infected, you cannot do anything about it and then it will be over … but it doesn’t solve anything,” she said. “If you are infected [you can] be infected a second time, third time, fourth time.”

Gasperowicz’s comments come a few days after a report from the B.C. Modelling Group suggested that recorded COVID-19 cases in the province could reach nearly 4,000 per day by June in a high-transmission scenario or as high as nearly 2,000 per day in a low-transmission environment. The report suggests the rise of new cases will be driven by the highly transmissible BA.2 subvariant of Omicron, which now accounts for more than 70 per cent of all new infections in B.C., in combination with a relaxation of restrictions.

Dr. Sarah Otto, who is a member told CHEK News in an interview Wednesday that with a sixth wave coming, there are some areas where public health measures need to remain in place.

“Right now with a rise in BA.2, no shirt, no shoes, no mask, no service, at least in essential services like grocery stores and buses,” she said.

Hospitalizations could range anywhere from less than 500 per day to nearly 2,500 per day by mid-June, although the report notes that predictions vary wildly because they are based on trends and data from the BCCDC dashboard, which is updated irregularly across all health authorities resulting in a “large under and over-estimation of new admissions” per day.

The B.C. government’s own projections, released Tuesday, suggest that hospitalizations could climb to 100 or more people per day by the end of May. Dr. Bonnie Henry, the province’s top doctor, said Tuesday there will likely see an increase in cases in the coming weeks followed by a gradual decrease but that the level of risk to the population at large is low.

“There are very few people that are at that high level of risk anymore,” she said. “That’s because we have had this highly effective vaccine.”

However, Gasperowicz, who has also produced modelling charts similar to those by the B.C. Modelling Group, said there appears to be “an illusion” that cases are currently under control and everything is going to be fine.

“We see it with every wave. It’s one wave going down but under it is a new wave or new variant … because the risk protections were removed,” she said. “This flatness is an illusion. It’s misleading. We know that BA.2 is growing.”

RELATED: Some say they’re comfortable with B.C. lifting COVID-19 restrictions as others warn against it

Coronavirus cases have been on the rise in many parts of the world recently. China, which has operated under a strict zero-COVID policy, has seen large outbreaks of the virus in some of its provinces and cities. Shanghai, which has been dealing with a large-scale outbreak for weeks, reported 17,077 new cases detected over the previous day on Wednesday. The outbreak, fuelled by a surge of BA.2 Omicron infections, has resulted in more than 90,000 cases being recorded in the city.

Dr. Mike Ryan, the World Health Organization’s health emergencies program, said during a press conference last month that COVID’s reproductive number has risen above one in many countries causing a spike in new cases. He said one reason for that is the loosening of restrictions, which can lead to what he called “bounce” or rebound transmission.

“Opening up rapidly and removing almost all restrictions almost definitely results in a rebound in infections, the question is what impact that rebound will have. We have seen the impact the sublineage BA.2 has had in Asia and its increased transmissibility,” he said. “We are seeing now some increased pressure in Europe because of that virus, having that extra degree of transmissibility and a lot of reinfections.”

Nationally, health officials in Alberta and Saskatchewan indicated Thursday that cases appear to be on the rise, while Quebec officials have acknowledged a sixth wave is underway and extended the province’s indoor mask mandate. Quebec and Prince Edward Island are now the only provinces where masks must be worn in all public places.

Meanwhile, a science panel in Ontario has predicted the province will see a “tidal wave” of new cases based on wastewater monitoring, which currently suggests that there are actually anywhere from 100,000 and 120,000 new infections each day — a huge difference from the 4,224 new cases Ontario reported on Thursday.

Here in British Columbia, officials have formally ended daily COVID-19 reporting and moved to a weekly system. Reported cases have slightly increased over the past few days, while the province’s positivity rate has climbed 33 per cent since March 21, according to data on the BCCDC’s website.

RELATED: WHO warns countries not to reduce testing for COVID-19

Cases are likely much higher than what has been reported publicly because British Columbia is among a handful of provinces that have been reporting artificially low confirmed case counts and severely limiting access to PCR testing even though the WHO has urged countries not to reduce COVID-19 testing.

CHEK News specifically asked the Ministry of Health whether B.C. would be expanding access to PCR testing or increasing PCR lab testing following the WHO’s comments.

In an e-mailed statement, the ministry did not specifically answer whether testing would be expanded to more people or whether lab tests would be increased.

Instead, the ministry said testing is only recommended for people with symptoms who are at “highest risk of experiencing severe illness and may benefit from treatment” or for those who work or live in a high-risk setting such as health-care workers or those in long-term care.

The ministry also stated that British Columbia continues to have the capacity to process 20,000 COVID-19 PCR tests per day.

Arnold Schwarzenegger Looks Like A Tiny Child Next To André The...

Ruben Randall - August 25, 2022 0
Actor
Image via Instagram @schwarzenegger How do you make 7x Mr. Olympia Arnold Schwarzenegger look small? Put him next to Andre The Giant and Wilt...