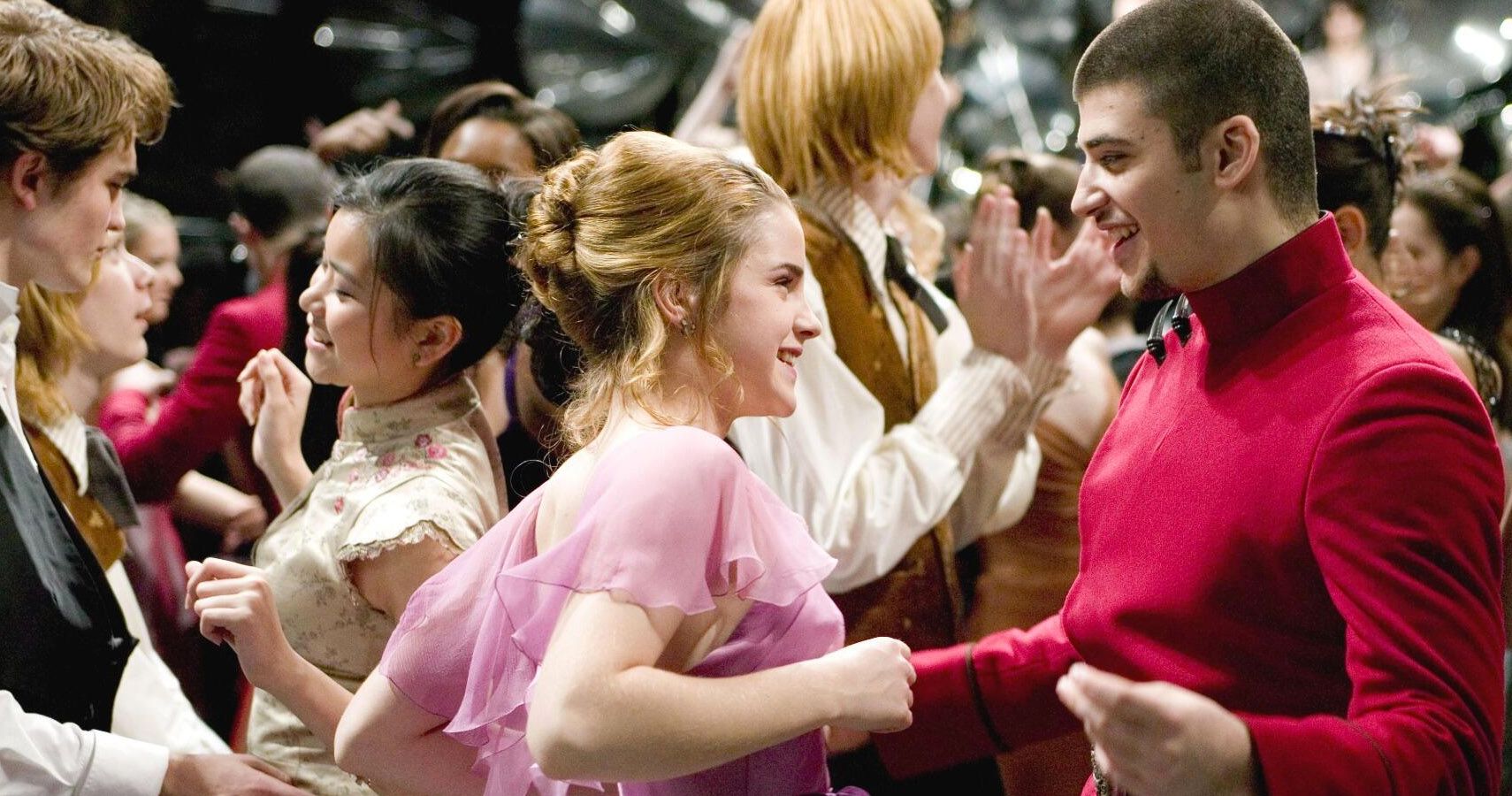 The Yule Ball held at Hogwarts one of the few moments from the Harry Potter series where the characters get a chance to focus on romance and celebration. While the Yule Ball is supposed to be a dance where the older Hogwarts students can enjoy spending time together and dating, there ends up being quite a bit of teenage drama. Most of the couples at the Yule Ball don’t end up together in the end, but still, some are more compatible than others.

RELATED: Harry Potter: 4 Relationships Fans Were Behind (& 6 They Rejected)

Here is every Yule Ball couple ranked by how compatible they are.

One of the most painful couples to read about interacting at the Yule Ball is Ron and Padma. Ron only really takes her as a last resort, and she only really agrees to go with him after being encouraged to do so. So, neither one is that interested in the other. Ron spends the entire time moping around and being jealous that Hermione didn’t go with him. Padma definitely deserved a better date than this. Even if in the Cursed Child they end up married in an alternate reality, this barely makes any sense given their low compatibility.

Draco Malfoy and Pansy Parkinson might kind of date through much of their time at Hogwarts, but it’s’ clear that Draco was never that into her. She clearly was way more into the idea than he was, and this is likely why they don’t actually end up staying together. Instead, he ends up marrying a woman named Astoria Greengrass. It’s clear that romance wasn’t really in the air with these two at the dance.

Seamus Finnigan and Lavender Brown might go to the Yule Ball together, but there isn’t much focus on them so it’s hard to know how the date went. They don’t seem to be super compatible given that they don’t seem to have dated afterward. And, Lavender ends up dating Ron during their sixth year. So, most likely it was just an average date with nothing majorly wrong but no sparks.

Harry ends up going to the Yule Ball with Parvati after Cho Chang turns him down since she’s already going with Cedric. Parvati is by all accounts a pretty and popular girl, and these two could have at least had a nice time.

RELATED: Harry Potter: 5 Reasons Why Harry Should Have Been With Luna (& 5 Why He’s Perfect With Ginny)

However, Harry ended up being a really poor date. He spent a good portion of the time moping about the fact that Cho didn’t go with him. It’s a shame because at the very least they probably could have gotten along for one night, but Harry was being rather immature.

Fleur and Roger Davies are a couple that seem to have a good time during the Yule Ball even if they don’t have long term compatibility. They are both attractive and popular people, and they spend part of the dance making out outside in the courtyard, so there was some chemistry there. While it might not be a love connection seeing as how Fleur starts dating Bill Weasley not long after, they were compatible enough to enjoy the date together and have fun kissing.

Neville and Ginny might not be compatible in a romantic way, but they are definitely compatible as friends. Ginny goes with Neville since that’s the only way she can go since she’s not a fourth year yet. While she definitely doesn’t have romantic feelings for him, and Neville is still at a somewhat awkward stage, these two are friends. They would have at least had a decent time and been kind to one another.

Fred asks Angelina to the ball in a rather abrupt manner, but she doesn’t seem to mind too much. These two were already friends because they were in the same year and both played on the Gryffindor Quidditch team. They seem rather compatible and like they would make a good pair. However, it’s actually George who marries Angelina, and there’s not a lot of indication ever given as to whether Angelina liked Fred or George more.

Hagrid and Madame Maxime aren’t exactly officially dating during the time of the Yule Ball, but it’s clear that there is some romantic interest there.

RELATED: Harry Potter: 5 Couples That Are Perfect Together (& 5 That Make No Sense)

They are one of the few Yule Ball couples who have some romantic relationship after the fact even if it doesn’t last long. These two are more compatible as friends than as romantic partners, but they do end up having a good connection.

Of all the couples at the Yule Ball, these two are one of the most tragic. They are both extremely talented, smart, beautiful, and popular, and they seem to get along rather well. While Cho also seemed to have a bit of a crush on Harry, she was also quite compatible with Cedric. However, since Cedric died, Cho and he never got the chance to see how compatible they were. This was definitely something extremely sad, and it impacted Cho emotionally as she grieved his loose the following year.

Hermione Granger and Viktor Krum might not end up together, but there’s definitely an argument to be made that they would have been a better pair than Ron and Hermione. She has a great time on their date until Ron throws a fit over it, and Krum seems to be very interested and kind to her. While in later books they set it up to make Krum look like a bit more of a jerk, at least at the Yule Ball he was a good match for Hermione. They got along well, and he didn’t lash out at her in the same ways that Ron did.

NEXT: Harry Potter: 5 Reasons Why Hermione Should Have Been With Viktor Krum (& 5 Ron Was The Right Choice)

Next
The Batman: 10 Aesthetically Gothic Movies To Watch For Fans Of The Movie


Amanda is a freelance writer and entertainment journalist.