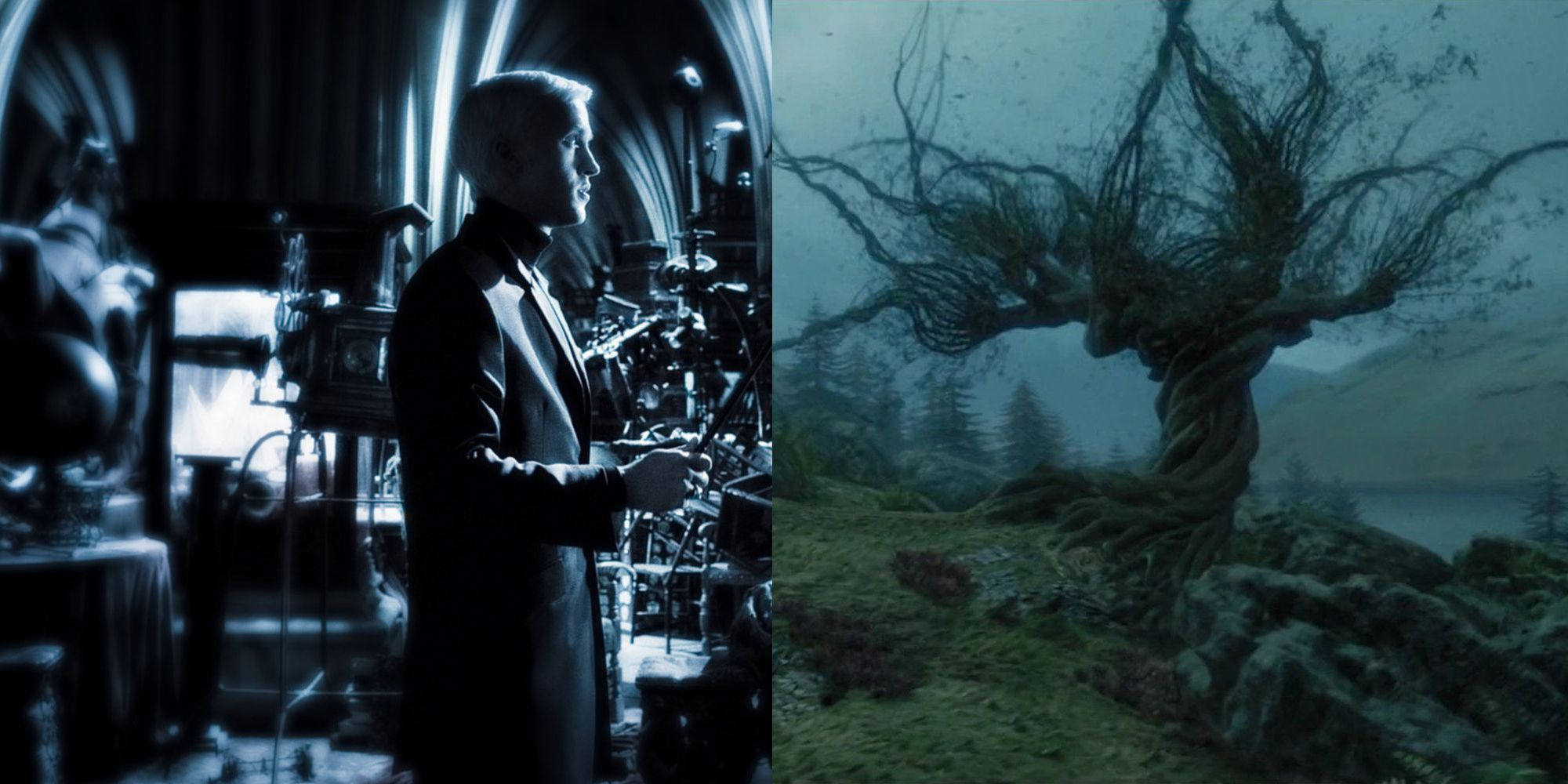 Hogwarts School of Witchcraft and Wizardry is notoriously difficult to get into or out of undetected. Wizards can’t apparate (teleport) into the castle nor transport themselves in via Floo Powder. Those seeking to enter or exit on foot have to brave magical barriers, deadly creatures and of, course, the ever-watchful Severus Snape. Nevertheless, over the series, inveterate rule-breakers Harry, Ron and Hermione discover several secret passageways that lead in and out of the school.

There are seven known secret passages that lead in and out of Hogwarts; Fred and George Weasley are the first to introduce the golden trio to the existence of these passages in Prisoner of Azkaban. They give Harry the Marauder’s Map, explaining that it lists seven secret exits. However, the Map is incomplete, and there are actually a few more passages that become relevant in later books. These passages vary in their danger levels, from risky to straight-up insane. They are a great example of the series’s creativity, and sometimes they even help to emphasize Harry Potter’s central themes.

As far as Hogwarts secret passages go, this is one of the safer ones. The One-Eyed Witch passage runs from behind a statue on the third-floor corridor, and leads out in the cellar of the sweet shop Honeydukes. Harry uses this passage many times in Prisoner of Azkaban, with the charm ‘Dissendium.’ He doesn’t have a permission slip from a guardian to visit the nearby town of Hogsmeade, so he needs this passage to sneak there to spend time with Ron and Hermione.

Although, at first, it seems like just a bit of world-building, this passage actually plays a key role in the third novel and film. Without it, Harry would not have been in the Three Broomsticks pub to overhear the conversation between McGonagall, Flitwick and Cornelius Fudge where he learns that Sirius Black is his godfather and (incorrectly) that Sirius betrayed his parents. This revelation sets in motion Harry’s confrontation with Sirius later in the book.

This passage was hidden behind a mirror on the fourth floor of Hogwarts. Fred and George used it many times to get into Hogsmeade when they were underage. It was also known to Sirius when he was at school, evident in the fifth book when he suggests that Dumbledore’s Army hold meetings there.

RELATED: 7 Times Fred and George Weasley Made Us Smile and Cry

However, this passage caved in when Harry was in his second year, and is unusable by the time of the fifth book. It’s not clear what caused the collapse, but odds are Fred and George had something to do with it.

Gregory the Smarmy Statue (Leads To Somewhere in Hogsmede)

In Philosopher’s Stone, Fred and George claim to have found this passage during their first week at Hogwarts, a testament to their skill as troublemakers. The passage is concealed behind the statue of Gregory the Smarmy, a famous potions maker. He was the inventor of Gregory’s Unctuous Unction, which makes anyone believe that the person who gave them the potion is their best friend.

This passage doesn’t play a big role in the series, nor is it clear where exactly it leads, although it’s likely somewhere in Hogsmeade. However, players use the passage in several of the Harry Potter video games.

Passage Beneath the Whomping Willow (Leads To The Shrieking Shack)

The secret passage beneath the Whomping Willow plays a key role in the novels, and is easily one of the deadliest trips in or out of Hogwarts. Harry and Ron learned how dangerous the tree could be in the Chamber of Secrets, when it smashed up Arthur’s flying car. Protected by the Willow’s brutal branches, the passageway leads to the Shrieking Shack, an abandoned building outside Hogsmeade.

The Willow was planted to cover the passage, and it has a small spot near the base which, if touched, would cause the tree to become immobilized. This allowed a young Remus Lupin to use the passage to hide out in the Shack during his werewolf transformations in Prisoner of Azkaban. The other Marauders used their skills as animagi to dodge the tree’s blows. The passage features in the climax of the third novel, as well, as the setting for a showdown between Snape, Sirius, Peter Pettigrew and, of course, a very wolfish Lupin.

Argus Filch is the curmudgeonly caretaker of Hogwarts and the bane of all rule-breakers. He and his cat Mrs. Norris perpetually roam the grounds in search of students up to no good. He is also perhaps the most knowledgeable character when it comes to Hogwarts’s secret passages. In the Order of the Phoenix, we learn that there are at least three other secret passages Filch knows about and monitors closely.

Filch’s relentlessness in putting a stop to magical shenanigans probably stems from the fact that he himself can’t use magic. He’s a Squib, a non-magical person with at least one wizard parent. It’s not surprising that he would be jealous of the students and their abilities. Nevertheless, for someone who can’t cast spells of his own, Filch’s knowledge of Hogwarts’s secrets is impressive.

The Room of Requirement is a secret chamber on Hogwarts’ seventh floor that only appears when a person has great need of it, and will transform itself to suit that person’s needs. It featured prominently in Order of the Phoenix as the meeting place for Dumbledore’s Army. Dumbledore himself also mentioned discovering it once when he needed the bathroom; it appeared to him as a room filled with toilets. As a student, Voldemort came across it too and, arrogantly believing it was known only to him, hid one of his Horcruxes there.

The Room has the power to transform into a passage too, if necessary, as evident in Deathly Hallows, when it forms a tunnel that opens out in the Hog’s Head pub in Hogsmeade behind a portrait of Dumbledore’s sister Ariana. Neville and the rest of Dumbledore’s Army use to it resist the Death Eaters in charge of the school. Most significantly, Harry, Ron and Hermione use this passage to get into the castle before the Battle of Hogwarts. This has thematic resonance, as Ariana died when Dumbledore was a young man, and her death prompted him to reconsider his life and become the wise wizard readers know. The passage is a way for Dumbledore and Ariana to aid the heroes from beyond the grave.

The Vanishing Cabinets (Leads To Borgin and Burkes)

Vanishing Cabinets are magical objects that, if used in a pair, can serve as a passage between two places. One such pair of Cabinets plays a major and tragic role in Half-Blood Prince. Draco Malfoy spends the year repairing the Cabinet in the Room of Requirement, hoping to use it for his plot to assassinate Dumbledore. Its counterpart is housed in the dark magical shop Borgin and Burkes on Knockturn Alley. Finally, Malfoy repairs the Cabinet, thus allowing a gang of Death Eaters to enter Hogwarts. The result is the confrontation between Dumbledore and the Death Eaters which ends in the headmaster’s death.

Malfoy’s Vanishing Cabinets are an essential plot point to the entire series, and the books foreshadow this long before the end. For example, in Chamber of Secrets, Harry accidentally ends up in Borgin and Burkes. When Lucius Malfoy enters the shop, Harry hides in a cabinet which, unbeknownst to him, is the Vanishing Cabinet that Draco later uses in Half-Blood Prince. The Order of the Phoenix book also mentions the Cabinet when Harry first enters the Room of Requirement.

Thematically, the Vanishing Cabinets serve as a metaphor for Malfoy’s complex character and his divided loyalties. After all, one Cabinet is housed in Borgin and Burkes, a symbol of dark magic and Malfoy’s Death Eater heritage. In contrast, the other Cabinet lies in the Room of Requirement, the meeting place of Dumbledore’s Army, symbolizing Malfoy’s ties to Hogwarts and the heroes. In a lot of ways, this was the central conflict of Half-Blood Prince: Malfoy’s attempt to navigate his family’s allegiance to Voldemort alongside his own independence. The fact that Malfoy doesn’t fall totally under the Death Eaters’ sway by the end of the last book is a major reason why the heroes are able to triumph. Indeed, Malfoy is one of the series’s most complex characters – which might explain why is he so popular amongst fans, despite being mean enough to make Regina George look like Mr. Rogers.

Impractical Jokers’ Guest Star David Cross Talks Having A Blast With The Trio In...

Ruben Randall - March 19, 2022 0
Celebrity
A team of Post reporters, who worked in conjunction with the International Consortium of Journalists and nearly 150 other news organizations, will receive...

Jared Kushner was treated for thyroid cancer while working in the...