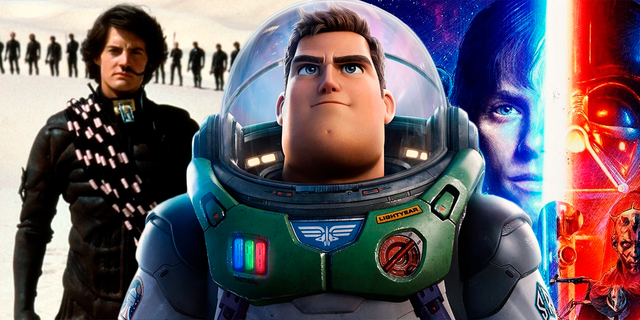 The lovely folks working at Pixar are huge film nerds in the best way possible. In their pursuit of perfecting storytelling at every turn, they have looked time and time again to classic films for inspiration and guidance. This has been evident in even their earliest work: The original Toy Story is a synthesis of various western and science-fiction genre works, A Bug’s Life is inspired by Akira Kurosawa’s Seven Samurai, and Monsters, Inc. mashed up classic monster movies and workplace comedies. Perhaps the genre most notably at the forefront of these inspirations is science-fiction. The Toy Story movies have all had clear science-fiction influences, and WALL-E is an indelible love letter to the genre as a whole. With its latest release, Lightyear, Pixar reaffirms its adoration of the science-fiction genre, playing in its sandbox once again and utilizing several deep-cut references to classics of the genre to help guide Lightyear’s story.

To get the most overt references out of the way first, let’s talk about Star Wars. Behind the scenes, director and co-writer Angus MacLane has referred to the movie as “Andy’s Star Wars,” referencing its in-universe existence as Andy’s favorite movie as a kid. And there’s a ton of Star Wars present here. From the visual design of the hyperspeed sequences and the crystals utilized to spark the jump to hyperspeed to the laser sword-esque devices Star Command utilizes in the opening and the Darth Vader-inspired design of Zurg, this is very clearly a work of science-fiction adventure filmmaking made after Star Wars. This is not only a smart shorthand for modern audiences (Star Wars is the most ubiquitous science-fiction franchise of all time), but it also further indebts Lightyear to its in-narrative timeline. No science-fiction film made in the ’70s or ’80s was made in a vacuum, and Star Wars had a tremendous impact on the entire genre for decades. So, with Lightyear meant to capture the spirit of that era, overt Star Wars influences actually help to further that idea.

See also  'I Would've Burned Every Bridge If That Flopped'

Star Trek also plays a large role here. The character of Buzz Lightyear was originally envisioned as a Captain Kirk-type character when introduced in Toy Story, with his constant narrating and affiliation with Star Command, a peace-keeping exploration unit, being directly tied to this idea. Lightyear keeps the narrating and Star Command’s presence and also makes Buzz even more of a Captain Kirk analog here. Buzz’s entire arc in Lightyear is learning that he cannot do everything by himself and that he has to be willing to accept the help of others. Kirk has been sent on several arcs like this over the years, with his initial refusal to rely on others being a key component of his character.

There’s also the inclusion of the iconic ‘red shirt’ joke. Infamously, Star Trek has a track record for any characters seen wearing Starfleet’s red shirts to become disposable cannon-fodder. Similarly, the rookie that Buzz Lightyear is supposed to be training during the film’s opening is wearing a red Star Command suit and is dispatched within minutes. The entire driving idea of Buzz getting the crew off of the planet they’re marooned on only for the people to accept their fate and live out their lives as he’s trying to fix his mistake is also very reminiscent of latter-day Star Trek. Putting the idyllic past in conflict with a much messier present feels indebted both to Trek and also to another Disney science-fiction opus, Pixar alumni Brad Bird’s Tomorrowland.

RELATED: Chris Evans’ Puppy Interview Is Here, and It’s Even Cuter Than We Imagined

Similarly, the entire time-traveling mechanic and how it ultimately leads Buzz to a future far more destitute than he could have imagined is indebted to H. G. Wells’ formative work of science-fiction literature, The Time Machine. Wells’ novel and the iconic George Pal-directed 1960 film adaptation both feature that story’s protagonist experimenting with time travel in the name of bettering his world, only to wind up traveling forward incrementally through the years. This results in everything he knows and recognizes gradually slipping away before he winds up in a future that is in far worse shape than the present he left.

In other classic works of foundational science-fiction, 2001: A Space Odyssey is not only referenced but also becomes crucial to one of Lightyear’s best recurring gags. During Buzz’s initial space launch, a pen goes floating out of his pocket, a recreation of the iconic visual of Kubrick’s 2001. Buzz immediately catches the pen, but this sets up the pen as a recurring motif, which Taika Waititi’s character later becomes fascinated by and ultimately uses to help save the day during the climax.

RELATED: Lightyear: Chris Evans Reveals Which Disney Character He Wants to Play Next

Lightyear is also not shy about embracing more mature, even horror-indebted science-fiction influences. Alien plays a big part throughout, with the film’s most memorable new character, Sox, the android cat, being a direct reference to it. Sox is designed to look like Ripley’s Jonesy the cat from the first two Alien films, and even his status as a helpful android often feels quite reminiscent of Bishop in Aliens. Later in the movie, a damaged version of Sox is introduced whose face is half-removed in the exact same style as Arnold Schwarzenegger’s titular character in The Terminator. Elsewhere, the patches that members of Star Command wear to indicate their rank are small triangular shapes, and Buzz’s captain status is marked with three triangles of white-and-yellow coloring that make up the Weyland-Yutani Corporation symbol from the Alien movies.

Aesthetically, Lightyear also evokes works such as Predator and even David Lynch’s Dune. When viewers are briefly shown the internal display of one of Zurg’s robots, it is just like Predator’s monstrous POV shots, complete with a very familiar sound design. When Buzz and his Star Command cohorts enter stealth mode, a bulky and blocky force-field spreads over their suit, just like the design of the shields in Lynch’s Dune film. Fascinatingly, Lightyear also owes a lot to a Disney World attraction: Mission: SPACE. The design of the XL-01 ship comes straight out of that ride, and the launch sequence and slingshot maneuver Buzz does repeatedly around the Sun are pulled directly from the ride’s narrative.

It’s hard not to admire Pixar’s work ethic. The studio has been delivering standout, innovative films for three decades while constantly urging audiences to go back and explore the classics upon whose shoulders it stands. With Lightyear, it may just inspire an entire generation to dig into the pulpy roots of its science-fiction influences in an entirely new way.

To see how it builds on previous sci-fi works, Lightyear is now in theaters.

Samuelson and Friedman — a rivalry that echoes down to the present

Ruben Randall - February 15, 2022 0
Celebrity
Mark Wahlberg, the singer turned actor, has made quite a career in the film industry, starring in a range of movies that...