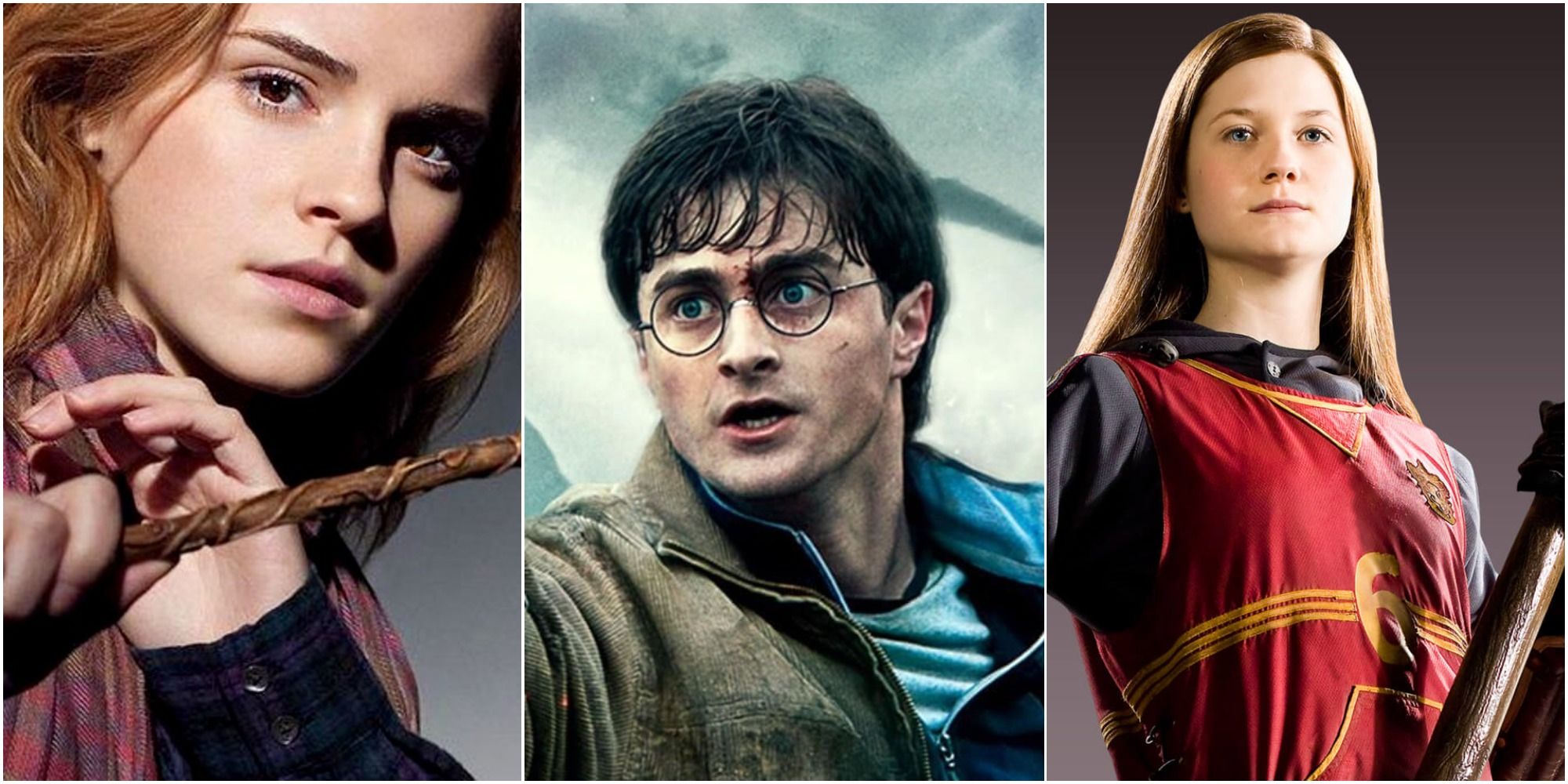 After an epic journey that leads its fans through seven books and eight movies, the tale of the boy-wizard Harry Potter finally comes to an end in Deathly Hallows. But their lives continue even after the defeat of Voldemort. While J.K. Rowling chooses to end the series with the memorable, if simple sentence, “All was well,” things aren’t quite so simple.

RELATED: Harry Potter: 10 Characters Who Were Sorted Into The Wrong House

The main characters of Harry Potter go on to experience new challenges in their lives as adults. The scars of the Second Wizarding War are always with them, though they endeavor to overcome their past and build a brighter future, all for the sake of the new generation.

After his defeat of Voldemort, Harry doesn’t go back to Hogwarts to finish his education. He becomes an Auror under Minister for Magic Kingsley Shacklebolt without having to take his NEWTs. Later, he climbs up the ranks, until finally taking up the post of Head of Auror Office and Head of the Department of Magical Law Enforcement. On the personal side, he marries Ginny Weasley and they have three children—James Sirius, Lily Luna, and Albus Severus.

He is also very close to his godson, Teddy Lupin, and, weirdly, remains on speaking terms with his abusive Muggle relatives, the Dursleys. Unfortunately, his relationship with his children isn’t always great, and he struggles with giving support to his youngest son, Albus, having not had a stable father figure in his youth.

Shortly after the war, Hermione Granger tracks down her parents in Australia and reverses the memory spell cast on them. The only member of the Golden Trio who returns to take her NEWTs, she then opts to work for the Department for the Regulation and Control of Magical Creatures. She pursues her dream to improve conditions for underprivileged magical creatures like House-Elves.

Moving up the ranks in the Ministry, she eventually becomes Deputy Head of the Department of Magical Law Enforcement and finally, a Minister for Magic. Throughout this time, she marries Ron Weasley and they have two children, Rose and Hugo.

Harry’s best friend Ron originally follows the same path as the Chosen One. He becomes an Auror, though he chooses to forgo returning to Hogwarts for his NEWTs. He leaves the Auror force after two years and decides to work at Weasleys’ Wizard Wheezes with his brother George. This decision is apparently influenced by the turmoil he experienced during the Second Wizarding War.

Even so, Ron remains an important figure, and alongside Harry and Hermione, he participates in revolutionizing Wizarding society. He works to eliminate old prejudice and reform the political system. He is also the godfather of Harry and Ginny’s first son, James Sirius.

Harry’s wife, Ginny proves to be incredibly talented at Quidditch ever since her early days at Hogwarts. In her post-Hogwarts years, she makes good use of this skill as she becomes a professional Quidditch player for the Holyhead Harpies.

Even after retiring from the Harpies, she doesn’t completely leave the field, instead taking up the position of Quidditch commentator. She eventually becomes the sports editor for the Daily Prophet. Her marriage to Harry is a happy one, and even decades into the future, they are very much in love.

7 Neville Longbottom Works As An Auror And A Herbology Teacher

Neville’s journey throughout the Harry Potter series is one of the most fascinating character arcs in the story. He goes from a shy and nervous boy to a brave man who takes out the Dark Lord’s final Horcrux. The duality of his character is also emphasized by his post-Hogwarts life.

He originally becomes an Auror, following the example of his friends and of his incapacitated parents, Frank and Alice. However, he later changes his career track. He becomes a Herbology teacher at Hogwarts and eventually, Head of Gryffindor House. He marries Hufflepuff Hannah Abbott. While the two don’t have children, Neville is the godfather of Harry’s second son, Albus Severus.

The charming Luna Lovegood may have been called “loony” at Hogwarts for seeing things other people do not, but her later magical accomplishments are nothing to laugh at. She becomes a famous Magizoologist, discovering numerous magical creatures never before introduced to the Wizarding World.

Perhaps appropriately, she marries Rolf Scamander, the grandson of Newt Scamander, the protagonist of the Fantastic Beasts franchise. Luna and Rolf go on to have twin sons, Lorcan and Lysander. Sadly, Luna never does find a Crumple-Horned Snorkack, and she has to accept that this particular animal was indeed her father’s invention.

Harry’s Hogwarts rival and bully, Draco Malfoy becomes a Death Eater in his seventh year at Hogwarts. However, both he and his family defect during the Battle of Hogwarts, which saves them from Azkaban after the Dark Lord’s defeat. Draco goes on to marry Astoria Greengrass, with whom he has a son named Scorpius Hyperion. Unfortunately, Astoria suffers from a blood malediction that strongly debilitates her and leads to her early death.

Despite the fact that Scorpius’s birth had a detrimental effect on Astoria’s health, Draco is a very loving father, raising him to be far more accepting than his younger self. As he preserves his wealth, Draco doesn’t actually need to work, and he dedicates much of his time after Hogwarts to the pursuit of alchemy.

The Head of Gryffindor House and Deputy Headmistress during Harry’s time at Hogwarts, Minerva remains one of the steadiest presences in the Wizarding World even after the war. She is awarded an Order of Merlin and takes over the post of Headmistress, eventually leaving the Gryffindors in the care of Neville Longbottom.

She keeps her position until the present day and is there to welcome the next generations at Hogwarts. Albus’s adventures and friendship with Scorpius cause some friction between her and Harry, but she is still a highly respected figure in the Wizarding World.

The Second Wizarding War ends with many losses, and the death of Fred Weasley doubtlessly ranks as among the saddest ones. It is a terrible blow to the whole family, but it hits Fred’s twin, George, with particular viciousness. As the twins were inseparable their whole lives, Fred’s absence leaves a gaping hole in George’s life.

George does eventually get married to Angelina Johnson, and the two have a son, whom they name Fred. George continues working alongside Ron at the twins’ dream joke shop, honoring Fred’s memory by making Weasleys’ Wizard Wheezes a huge success.

The main antagonist in Harry Potter, Voldemort is finally defeated at the end of Deathly Hallows. With his Horcruxes destroyed, his death is permanent. But even after his demise, he suffers from a grizzly fate, paying the price for the dark rituals he cast in life.

His mutilated soul remains trapped in limbo for eternity, and he can neither move on nor return to the world of the living as a ghost. However, his heritage lives on, and his and Bellatrix’s daughter Delphini returns later, intent on bringing her father back to life.

Hogwarts loses two headmasters during the series—the famous wizard Albus Dumbledore and the former Head of Slytherin House, Severus Snape. Both remain in portrait form at Hogwarts, though in Snape’s case, this is at Harry’s insistence, in acknowledgment of the role Snape played in the Second Wizarding War.

While the portraits don’t serve as replacements for the people who are gone, they do remain important. Albus’s portrait is a source of advice for Harry, particularly when it comes to his younger namesake. Both Dumbledore and Snape receive insulting biographies from Rita Skeeter, titled The Life and Lies of Albus Dumbledore and Snape: Scoundrel or Saint? respectively.

NEXT: Harry Potter: 10 Times Nothing Went According To Plan


Next
10 Worst Things About Captain America In The MCU

How House Of The Dragon’s Olivia Cooke Really Feels About Her...

Ruben Randall - August 28, 2022 0
Actress
If you've yet to catch up with "House of the Dragon," Cooke portrays Alicent Hightower in the series, who happens to be the daughter...