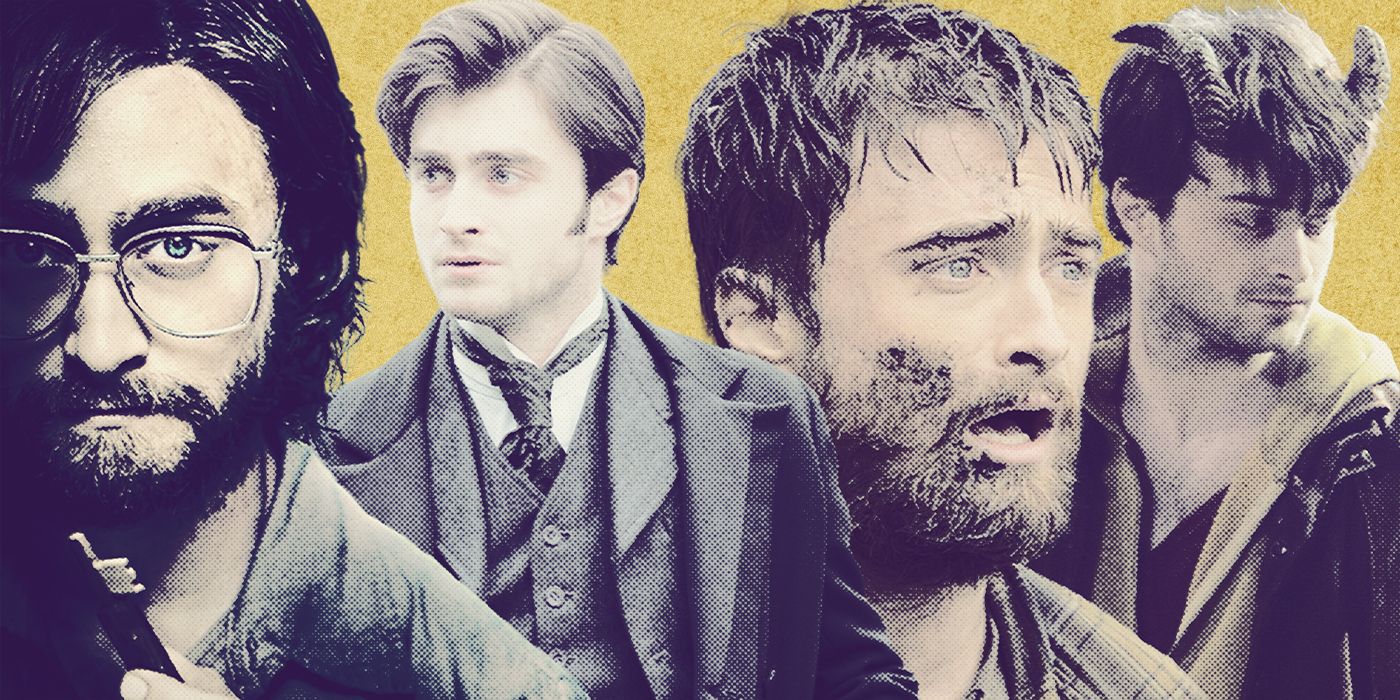 Harry Potter gave Daniel Radcliffe worldwide fame, and like other all-consuming franchises such as The Lord of the Rings, Radcliffe (and Elijah Wood) have worked hard to be seen as more than just one character. During the filming of the fifth Harry Potter movie, Radcliffe appeared on London’s West End, in a play called Equus (where he appeared completely naked), that was critically well-received. This became a turning point in his career, and it showed that Radcliffe could do more than just wand-waving magic. No matter how influential the franchise was, it was clear Radcliffe wanted more of a challenge.

Here are twelve non-wizard performances of Daniel Radcliffe’s to enjoy.

Starting off our list is Beast of Burden, Radcliffe’s weakest movie to date. Here he plays Sean Haggarty, an ex-Air Force pilot, and desperate drug mule. He has one hour to fly his Cessna to reach a drug cartel’s pickup. Apart from some flashbacks, rain, and a low fuel gauge, the most exciting moment of the film is when the USAF sends a drone to follow him.

The story is plausible enough, but unless an actor is given something to act with, (the majority of the movie was shot in a cockpit) it becomes an arduous trail through the skies. With very little tension created, the plausibility factor isn’t enough on its own and the storyline falls flat.

The Four Horsemen are back to wow (and deceive) us once again. Building on the success of the first movie, we find our gang, forced by tech genius Walter Mabry (Radcliffe), to steal a chip that can control all the world’s computers. Loaded with tricks, twists, and an ending sequence that involves passing an obvious CGI playing card off as a real one, the movie fails to impress.

Radcliffe plays a stock character that is easily forgotten and lacks any conviction. The whole premise is a movie full of amazing illusion, but it fails before any trick is completed with lackluster post CGI.

This adaptation of a classic story centers on the friendship between Victor (James McAvoy) and Igor (Radcliffe). After some good, old-fashioned pus lancing, (What are friends for?), Victor enlists Igor to help in his ongoing experiments, and in his noble quest to make life from death.

Radcliffe’s performance feels rushed, and his energy is sadly reflected in the movie’s needless action and explosions. Subsequently, the pace is uneven, and the horror movie is not grounded by fear. Radcliffe appears too eager to make the movie work, and at times looks so out of place that we can see the cracks in his character. The movie also tried too hard by distancing us from what we would expect from this classic story, veering too far from the source material.

Horns is a dark and vengeful, man-on-a-mission comedy horror. Radcliffe plays Ignatius ‘Ig’ Perrish, an outsider whose girlfriend is the only thing that matters to him. Unbelievably, he is framed for her murder, and after getting drunk to ease the pain, he wakes to find that he has grown magical horns that allow him to read people’s minds. They can control snakes, and also force people to carry out their desires. With his newfound power, Ig sets off to track down the killer.

Radcliffe takes a risk with Horns. Not all good books make good movies, but this adaptation was one that he did seem to play with ease. Even if Radcliffe walked the line between success and failure, he made the movie what it was.

Image via Entertainment One

Socially shy, and working in a dead-end job, Wallace (Radcliffe) is forced by his best friend Allan (Adam Driver) to attend a party where he meets Chantry (Zoe Kazan). This is the start of their endearing yet rather awkward relationship. The only problem is, Chantry isn’t single. Instead, she lives with her boyfriend, and Wallace soon realizes that he doesn’t just want to be friends.

While the premise might seem a bit predictable, it’s a romantic comedy that is adorable and funny, with dialogue that is exciting and engaging. Most romances fail to hit all those marks. Radcliffe plays awkward well, and his out-of-place English mannerisms lend themselves excellently to his characterization. He’s thoughtful, quirky, and by the end, we are rooting for him. It may be familiar, but it’s a perfect date night movie.

Cool, crazy, and completely mad, Guns Akimbo is all three of these things. In this video game-inspired “shoot ‘em up,” players are selected by an online criminal organization that streams live death matches, normally between psychopaths. So no one is more surprised than computer programmer and full-time chat-room troll, Miles (Radcliffe) to find that he has now been entered into the next real-world death match. The rules are simple: kill or be killed.

Radcliffe is loud, full of panic, and brilliantly pathetic as Miles, armed with twin pistols that have been bolted to each of his hands. He’s on the move from the start, giving action a different perspective with a bumbling, irreverent style. It’s great to see Radcliffe in something more challenging as he dives headfirst into the madness.

In Swiss Army Man, Hank (Paul Dano) is stranded on a deserted island with only one way to escape: suicide. Just as he is about to hang himself he notices a corpse washed up on the beach. Hank is now saved by this corpse named Manny (Radcliffe) and soon realizes that he can manipulate him much like a Swiss Army Knife, including, of all things, his farts. Will they get home? Are we inside a dream or is Hank hallucinating? You decide.

A bizarre and fascinating role, Radcliffe distances himself from everything that we usually associate with him. Both actors make the twisted, funny, and sad drama worth its weight through their talent of acting alone. It may have been a step too far for some, but not at the Sundance Film Festival, where it won the U.S. Dramatic Directing Award.

Set in the Amazon rainforest, Jungle is a biographical survival story based on the accounts of Yossi Ghinsberg (Radcliffe). Looking for adventure, Ghinsberg and two friends meet Karl (Thomas Kretschmann) who promises them a once-in-a-lifetime trip to track down an indigenous tribe that knows him. How could they refuse?

Radcliffe outperforms the rest of the cast with his spiral into survival insanity. And that scene of self-operation with tweezers, Yossi’s forehead, and a worm, is one that is hard to forget, even for the non-squeamish. He even manages to pull off a convincing Israeli accent in the process.

The story follows a group of college students, set against the backdrop of 1940s New York City. It’s stylish, high-brow, and cool. Radcliffe plays Allen Ginsberg, a poet that gets mixed up in drugs, drink, term-paper plagiarism, and a fatal stabbing. Ginsberg’s entire future at college then turns bleak.

A biographical movie, one that John Krokidas, in his feature directorial debut, does well by giving it a credible balance of realism without the need to overcook or sensationalize. This is an excellent wartime drama that hits every mark on the spectrum of emotions, and Radcliffe certainly uses the same spectrum in his portrayal of Ginsberg. Without a doubt, it deserves a spot in the top five.

Imperium posits the subtitle of, ‘Defend your nation, become your enemy’. America is put under a spotlight and the enemy in question are white supremacists. FBI agent Nate Foster (Radcliffe) goes undercover to help bring down a terrorist organization while trying to fit in and not blow his cover. The trick is to do it all without going as far as to lose his morals in the process.

Bomber jacket, skinhead, and tattooed, Radcliffe looks the stereotypical Neo-Nazi. Thrilling, and suspenseful with edge-of-your-seat moments when Nate is challenged in his authenticity by the supremacists’ cause. Radcliffe plays the cat-and-mouse game of deception fittingly. It serves as a compelling and dramatic watch, and it is one that signifies Radcliffe could easily continue within the genre of crime thriller.

Based on true events, Escape from Pretoria is the capture and arrest of two, white, South Africans, Tim Jenkins (Radcliffe) and Stephen Lee (Daniel Webber), for their anti-apartheid protests. After settling into prison life and making friends and political allies, the duo decides to escape with the help of another prisoner by making exact copies of prison keys from wood.

Only just missing out on the top spot because of too many periods of slow-burn scene-setting, Escape from Pretoria shows us again how Radcliffe is naturally inclined to any facet of the thriller genre. The suspense created in his final attempts to escape, armed with wooden keys that with every turn could break, is perfectly executed, and almost unbeatable. Radcliffe looks mature, comfortable, and convincing.

1. The Woman in Black

In The Woman in Black, Radcliffe plays Kipps, a lawyer who has been sent on the mundane mission to retrieve documents from the deceased owner of a considerably creepy, old house. Given the cold shoulder by locals and plagued by a terrifying, haunting, spectral entity (a certain woman in black) Kipps uncovers macabre secrets, and events spiral out of his control.

If you are looking for a period drama that is atmospheric, spine-chilling, and genuinely makes you wake up in the night and stare out your bedroom door because you feel something isn’t quite right, then The Woman in Black is for you. Radcliffe plays both serious and seriously scared adeptly. Although still fresh-faced from playing Mr. Potter, Radcliffe breaks out of his mold elegantly. And the climactic train station finale, pitted against the ghoulish antagonist, is every parent’s worst nightmare. Atmospherically terrifying, this film is Radcliffe’s best non-Harry Potter movie to date.

The only music biopic you’ll ever need.

‘Little Shop of Horrors’ at 40: The Plant That Conquered the...

Ruben Randall - May 20, 2022 0
TV/Movies
MARTIN P. ROBINSON (puppeteer) Howard told me later that when he presented the challenges of the script — the need for a plant that...