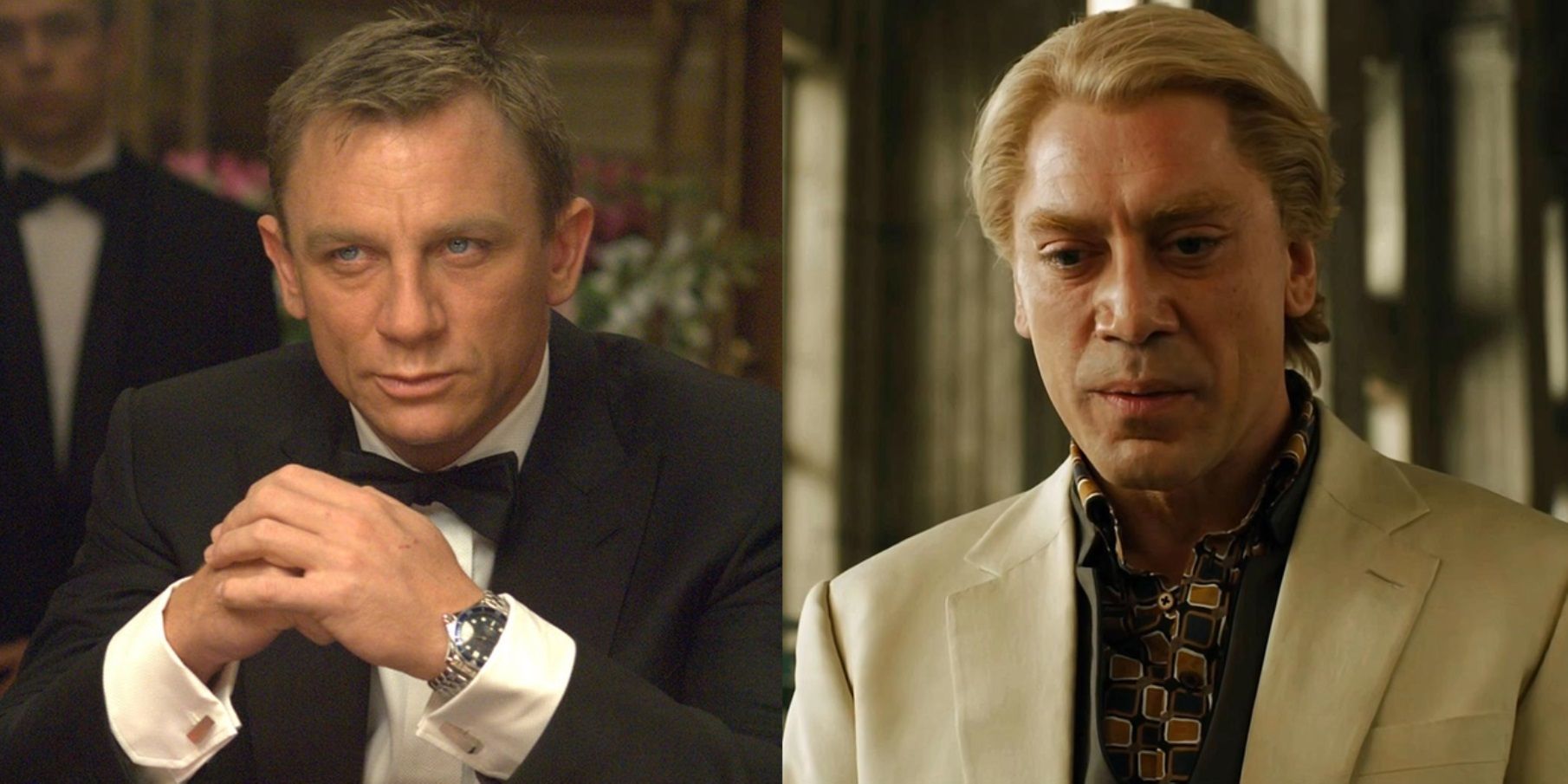 The search is underway for a new James Bond. The producers are looking for a younger actor to take over the role of everyone’s favorite gentleman spy. After Daniel Craig’s tenure as 007 wrapped up in spectacular style last year with the bittersweet finality of No Time to Die, Eon has some pretty big boots to fill with the next incarnation of the iconic spy movie franchise. Fans might have to wait a while for the next Bond movie, but Craig has left behind five action-packed gems to revisit in the meantime.

Some of the movies from Craig’s five-film tenure in the role of 007, like the heartbreaking Casino Royale and the fun-filled Skyfall, warrant more rewatches than others, like the bloated Spectre and the mediocre Quantum of Solace.

After Casino Royale got Craig’s tenure as 007 off to a terrific start with some of the best reviews in the franchise’s history, his second movie Quantum of Solace was met with some of the worst reviews a Bond film has ever received. It’s the weakest movie of the Craig era by far.

Shaky storytelling can be forgiven in Bond movies like Thunderball and Octopussy that still have the franchise’s classic sense of fun. Quantum of Solace’s greatest crime is that it doesn’t have the distinctive feel of a Bond movie. It’s just a generic action thriller with a generic industrialist villain. At the very least, that villain gets one of the series’ coldest death scenes as 007 abandons him in the desert with nothing to drink but a can of oil.

If it didn’t have the distinctive Bondian feel that Quantum of Solace was missing, Spectre would give Quantum a run for its money as Craig’s weakest Bond movie. After Sam Mendes blew their minds with his first Bond film, Skyfall, fans were bitterly disappointed with his second one. Spectre is let down by its bloated runtime and a meandering plot that needlessly ties the whole Craig era together into a single retroactive Marvel-style continuity.

Still, Spectre has some fun stuff that’s worth revisiting a couple of times, like the Day of the Dead cold open, Christoph Waltz’s chilling turn as Blofeld, and 007’s brutal fight with Mr. Hinx on a speeding train (a visceral homage to the iconic Red Grant fight in From Russia with Love).

The bittersweet finale of the Craig era, No Time to Die, has more of a sense of closure than any other Bond actor’s final performance in the role. It marked a welcome return to the classic structure of Bond movies, with an action-packed, globetrotting adventure building toward a climactic showdown at the villain’s grandiose secret lair.

Rami Malek’s turn as Lyutsifer Safin, a traditional Bondian megalomaniac with apocalyptic plans to reshape the world, is more understated than the average Bond villain performance. With a runtime pushing three hours, No Time to Die is a lot longer than it needs to be, but there’s so much exhilarating action that it doesn’t feel that long at all.

Martin Campbell’s gritty reboot Casino Royale reinvented the Bond mythos from scratch. It’s an origin story detailing how Bond earned his 00 status and his license to kill, and also where his cold-hearted emotional detachment comes from. Casino Royale is one of the best-crafted films in the franchise. It’s pretty light on action, but its plot is compelling enough to make up for it. Casino Royale gets off to a mind-blowing start with the parkour chase, then slows down in the middle act with extended poker sequences. Intermittent action scenes like the brutal stairwell fight and the explosive airport chase keep the audience on the edge of their seats in this espionage-focused section.

It’s all tied together by the Bond franchise’s most tragic love story since On Her Majesty’s Secret Service. 007 falls so madly in love with Vesper Lynd that he quits MI6 to go on a long vacation with her. She betrays him, which breaks his heart. Then, he learns that she only betrayed him to save his life, but before he can make up with her, he fails to rescue her from drowning in a sinking building in the devastating finale. It’s an emotional rollercoaster. By the end of the movie, Craig has morphed into the 007 that fans know and love.

The third entry in the Craig era, Skyfall, found the perfect intersection between the gritty realism of Casino Royale and the far-fetched fun of classic 007 adventures. Sam Mendes brought back all the familiar hallmarks that were missing from Craig’s first two Bond films, like the Aston Martin, the cheesy one-liners, and the goofy gadgets provided by the Q Branch.

The plot is pretty nonsensical when it’s put under a microscope, but the movie’s thrilling action set-pieces – gorgeously shot by Roger Deakins – more than make up for it. From Bond’s near-death experience in the cold open to the silhouetted fight in Shanghai to Raoul Silva’s climactic home invasion in the Scottish Highlands, Skyfall is full of riveting sequences that never get old.

NEXT: Every Sean Connery James Bond Movie, Ranked By Rewatchability