Ethereum is finally set to embark on its long-awaited transition to proof-of-stake. With this major update slated to happen sometime next month, controversy and questions abound around what will happen to the deprecated proof-of-work network post-Merge.

In spite of the fact that the “Ice Age” is supposed to freeze out PoW miners with its “difficulty bomb,” there is a growing movement to keep Ethereum’s old consensus mechanism alive.

This article originally appeared in Valid Points, CoinDesk’s weekly newsletter breaking down Ethereum’s evolution and its impact on crypto markets. Subscribe to get it in your inbox every Wednesday.

In 2016, Ethereum’s community was in crisis. An exploiter ran away with around 5% of all ether (ETH) in circulation, and the nascent ecosystem was gripped by controversy: How should Ethereum proceed? The result was a “hard fork” – a backwards-incompatible code change that created a new instance of the network – one where token balances were adjusted as if the infamous “The DAO exploit” never happened.

But not everyone was on board. A subset of anti-fork purists – along with some of Ethereum’s chief trolls and detractors – continued to operate the old, hack-tainted chain under the moniker of “Ethereum Classic.” The spin-off chain was hollowed out of its community, but it nonetheless vied with its sister network to be the true heir to the Ethereum throne. And it may have gotten close to its goal: ETC, the version of ether (ETH) on the Classic network, briefly seemed like it might flip ETH in value.

Ethereum Classic’s bid for blockchain dominance ultimately failed, but it nonetheless set the stage for years of grifts, confusion and debate.

On Sept. 15 (or thereabouts) Ethereum will finally, at long last, they swear this time, initiate its transition to a proof-of-stake (PoS) system. The much-postponed upgrade, which has been on Ethereum’s roadmap since its inception, will dramatically cut the chain’s carbon footprint in favor of a new system that proponents hope will also make the network more secure.

But not everyone is excited for PoS. Some of Ethereum’s miners – those who run computers to process and validate transactions on the current proof-of-work (PoW) network – plan to keep the old network up and running.

Read more: Who Will Mine Ethereum After It’s Gone?

Without Ethereum’s users and core developers, this forked network will be a crypto “uncanny valley.” It will look and feel like Ethereum, but it will only be a skeleton of the real thing, with apps and tokens floating around without usage or value.

Things will break. Grifters will grift. But the movement behind a forked PoW Ethereum appears inevitable.

The virtues of PoS over Ethereum’s current PoW consensus mechanism are a matter of heated debate. We won’t get into the nitty-gritty of that debate here, but the essential part to understand is that a consensus mechanism is the set of rules by which nodes – the computers operating Ethereum’s blockchain – process transactions.

As long as they meet certain requirements, computers can compete to issue blocks of transactions on the Ethereum blockchain. As a reward for doing so, they receive a payout, typically a mix of transaction fees and an allotment of newly issued crypto.

PoW and PoS differ in how they select who can issue blocks. PoW, the system spearheaded by Bitcoin and currently used by Ethereum, accomplishes this task using “miners.” For the privilege of adding the next block to the chain, miners compete to solve a kind of cryptographic puzzle – basically a race to find some random number.

PoS forgoes mining and instead passes the responsibility of block-issuance to so-called validators. One can become a validator by locking up 32 ether as a “stake” on the Ethereum blockchain. The more ether one stakes, the more likely one will be randomly selected to issue the next block.

PoS advocates say PoW is energy-inefficient and biases control of the network to companies who can afford to run expensive, mining-optimized computers called ASICs. PoW adherents say PoS is less proven than PoW and holds its own centralization and security risks.

Whatever the inherent advantages and disadvantages of each system, Ethereum, if all goes to plan, will switch to PoS come September. But what’s to happen to all the PoW miners who invested in that fancy mining hardware? And what about those who think that PoW, despite its flaws, is more secure than PoS?

Not everyone with a vested (or ideological) interest in PoW Ethereum plans to give up on the old mechanism. And why should they? This is crypto, and where some see a fork, others see dollar signs.

Prominent crypto personalities including Justin Sun and Chandler Guo have both announced their intent to support Ethereum PoW forks, and crypto exchanges like FTX and Sun-backed Poloniex say they will allow users to trade forked ether tokens.

Rather than a single piece of software, Ethereum – a network of computers – is better thought of as a nation-state, with a set of rules governing how it operates. If a bunch of people agree on changing the rules, the entire network doesn’t suddenly “update.” They’ll need to convince other people to jump on board.

Sometimes, these rule changes lead to a fork, where two (or more) new networks spring up with slight operational differences – each supported by some subset of the community.

At a high level, the PoW forks described by Sun and Guo will be exact duplicates of the main Ethereum chain, where the “state” of the original chain – meaning transaction history and token balances – is preserved.

At the moment of the Merge to PoS, users will suddenly have access to two (or more) different blockchains with identical token balances and smart contracts (the mini computer programs that run on Ethereum’s blockchain).

But does a forked Ethereum mean all of your money will suddenly double (or triple, or quadruple, depending on the number of forks)? No, not really.

Tokens are only worth as much as the market dictates. Certain tokens – particularly the ether used to pay for transaction fees – could have some value on PoW forks. Plus, crypto’s meme-driven markets are no stranger to baseless speculation.

But not all of the apps and services built atop Ethereum’s soon-to-be-PoS network will support PoW forks, and in most cases, the lack of active community support will break the mechanism by which tokens derive their ostensible value.

Take, for instance, stablecoins like USDT and USDC – neither of which appear likely to receive support on PoW Ethereum forks.

These tokens are core to Ethereum’s decentralized finance ecosystem owing to the fact that they are, unlike the volatile ethers and bitcoins of the world, “pegged” to the price of $1. They trade at this price because their issuing authorities claim to have $1 in the bank for every digital dollar they put into circulation.

You cannot merely duplicate your balance of USDC and USDT onto a new blockchain. The 1:1 backing will only exist for the officially recognized instance of a digital dollar – the one that exists on the canonical, soon-to-be-PoS blockchain. As such, holding USDC or USDT on an Ethereum PoW fork will be like holding counterfeit money.

The lack of stablecoin support on Ethereum PoW forks will have broad consequences for the ability of other forked tokens to retain value. USDC and USDT are used as collateral throughout DeFi. If and when these tokens on the PoW chain stop trading at $1, they’ll set off a cascading effect that will – in combination with other factors – render most other forked tokens virtually worthless.

Ethereum’s PoW forks will, at least initially, be like China’s vast ghost cities – the foundations will be there, but absent any signs of life.

So why would anyone breathe life into an empty, copycat blockchain?

Kevin Zhou of Galois Capital has been one of the loudest voices on Twitter predicting that PoW forks will proliferate after Ethereum’s Merge to PoS.

“Someone could just make a fork – they know it’s probably not going to work, and they don’t plan to support it. They’re just going to get some free coins … and then just dump them,” Zhou told Shin.

Hasu, a researcher at Ethereum infrastructure firm Flashbots and prominent voice in crypto circles, has called the idea of Ethereum PoW forks that duplicate the original chain’s ledger a “completely stupid idea.”

“Crypto is full of bad projects that only exist to dump on retail,” he tweeted, “but that doesn’t make it OK to support them. [T]he fact that ghost chains like ETC [Ethereum Classic] still exist does not vindicate that point.”

But Zhou – in contrast to Hasu and most of the wider crypto community – doesn’t think all PoW forks will be thinly veiled cash grabs.

Ethereum miners raked in over $600 million last month in rewards and transaction fees. If miners want to put their expensive hardware to use on a new chain, Zhou thinks they could do worse than an Ethereum PoW fork.

Speaking at the ETH Seoul conference earlier this month, Ethereum co-founder Vitalik Buterin waved away concerns that PoW Ethereum forks – grift or not – might eat into activity on Ethereum’s PoS mainnet.

Describing “pretty much everyone” in the Ethereum community as “unified” around the switch to PoS, Buterin pointed to his one-time-nemesis, Ethereum Classic, which will remain PoW, as “the superior product for people with those pro-proof-of-work values and preferences.”

Buterin’s about-face on the early Ethereum fork shows just how small a threat it has become in the years following its divisive introduction.

Ethereum Classic has seen recent investment from miners who think it will attract PoW adherents after Ethereum ditches PoS, but activity on the problem-prone chain pales in comparison to the rest of Ethereum.

Whatever your view on PoW, what happens next will be confusing, and it may even be entertaining, but – if the example of Ethereum Classic is anything to go by – it is unlikely to mean much for Ethereum as a whole.

The following is an overview of network activity on the Ethereum Beacon Chain over the past week. For more information about the metrics featured in this section, check out our 101 explainer on Eth 2.0 metrics. 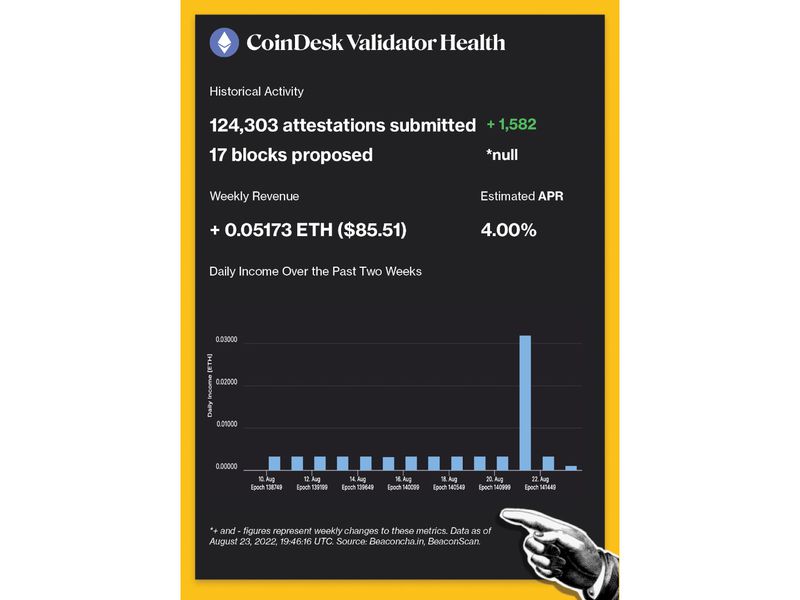 Disclaimer: All profits made from CoinDesk’s Eth 2.0 staking venture will be donated to a charity of the company’s choosing once transfers are enabled on the network.

Sepolia becomes the first Ethereum testnet to get a post-merge upgrade.

Factoid of the week 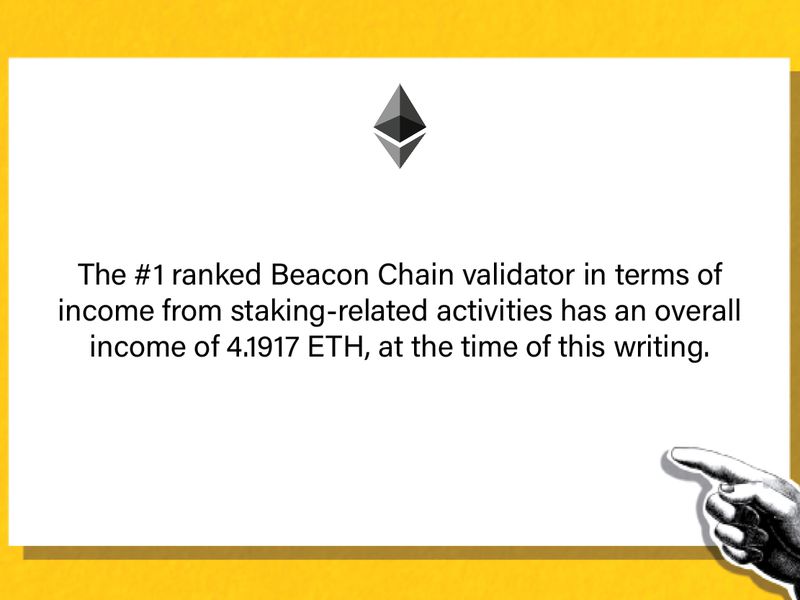 Valid Points incorporates information and data about CoinDesk’s own Ethereum validator in weekly analysis. All profits made from this staking venture will be donated to a charity of our choosing once transfers are enabled on the network. For a full overview of the project, check out our announcement post.

You can verify the activity of the CoinDesk Eth 2.0 validator in real time through our public validator key, which is:

Search for it on any Eth 2.0 block explorer site.

Always high-energy: Peach is ready to explore her own fully-realised vision – Features

Seahawks surging, put clamps down in dominant win over Giants