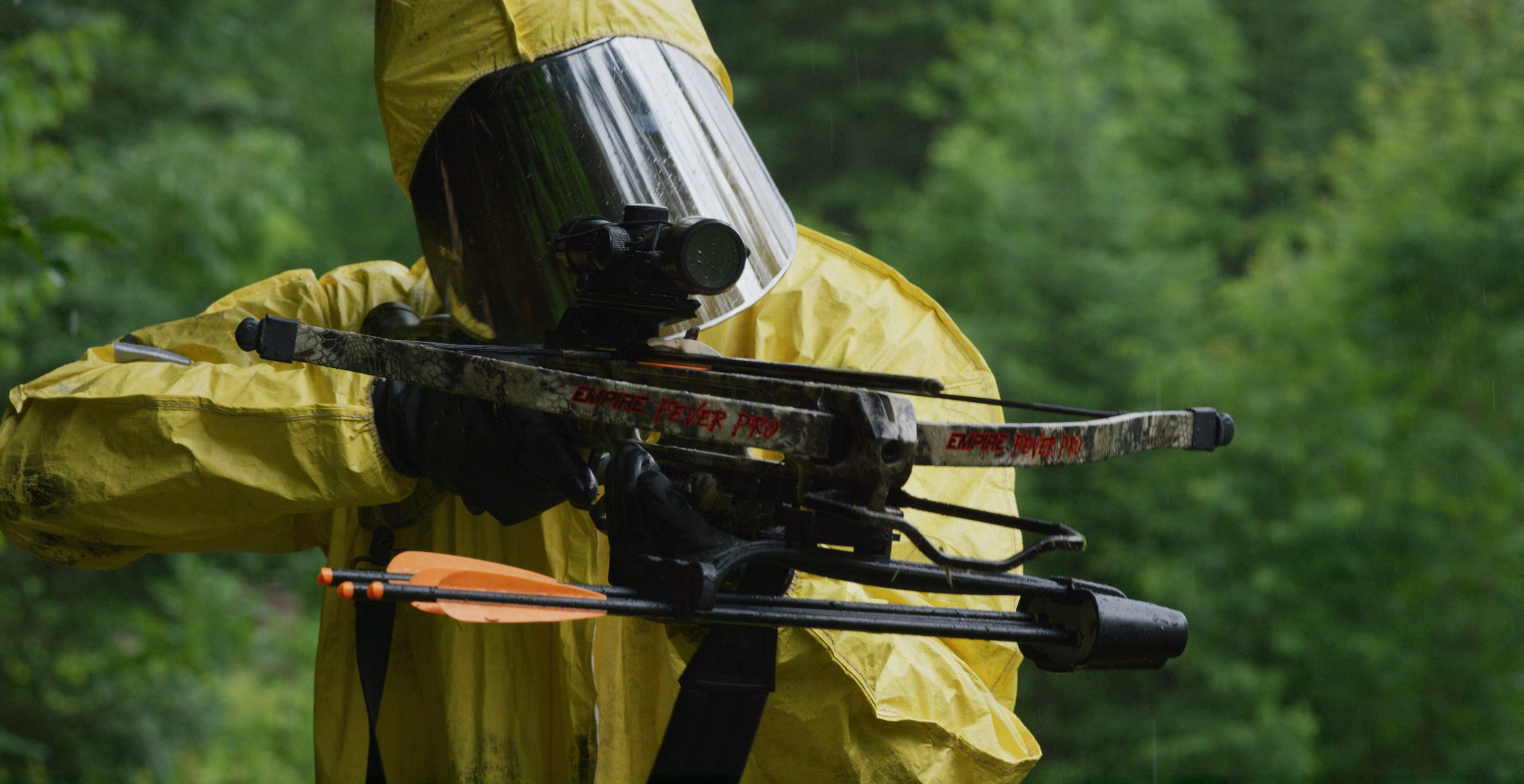 Daniel Byers is not the first filmmaker to turn the horrors of the pandemic into an actual horror show. He also isn’t the first one to delve into the repercussions of elongated isolation. In fact, there’s not much in Eradication that makes it stand out from the genre that has been marrying virus-induced hysteria with that of survival. However, there’s something visibly creepy about his film that still makes it worth a watch.

For a large part of the narrative, we are isolated with David Baldwin (Harry Aspinwall). We follow his daily routine which is a combination of carefully choreographed sequences of him waking up, setting his stop-clocks straight, doing his daily chores, exercising, cutting wood for the house, and waiting each day for a video call from his wife Samantha Kamali (Anita Abdinezhad).

There’s a neutralizing program going on by the government called ‘Eradication’ where everyone who is affected by the virus outburst is being well – Eradicated. The organization has implemented a rigorous drone protocol which is slowly nullifying the population that is turning into zombie-like creatures due to the virus.

David, due to his extreme precaution has been unaffected and so he has to make weekly drops of his blood in exchange for food supplies. However, 2 years have passed and the isolated existence in the big house perched on the mountain is getting to him. The secured calls from Sam (short for Samatha), who is sampling David’s blood for a possible cure, are also getting shorter, more anxious, and possibly shady.

The fear, doubt, and scarcity of food have now settled into David’s psyche and when he is able to connect to another person who is also unaffected via a random phone call, it leaves him questioning Sam and the government agency altogether. So, David decides to embark on a stroll to find some answers, only to realize that things are not as straightforward as he anticipated.

Now, coming to the film itself, Daniel Byers is able to slowly establish a sense of dread and creepiness without even leaving the house. His biggest success in this micro-budget thriller is the atmosphere he is able to conjure up even before the shit hits the fan. He deliberately implies a creepy feeling without the use of an overtly manipulative background score that has now become a norm in these low-key chillers.

I would even go ahead and say that the intensity of his opening scene; that includes two kills from the cross-bow is no match for the doubt he allows to settle into David. Thereby making the motifs of his action much more palpable and intriguing. That said, I found the final third of this film a tad bit implausible and conveniently arranged for the film to end a certain way.

And even though Byers tries his best to not let jumpscares take precedence in his twisted final act, the film doesn’t land the punch I expected it would. Thus making the power struggle and the government’s exploitative regime feel like an unprecedented plot thread instead of a bigger thematically relevant hot topic.

The acting is pretty decent across the board but the shoddy VFX really put me off. I understand that this was shot on a shoestring budget of $5,000 dollars, seeing how Byers almost manages to sell this as at least a mid-budget film, made me wish he had taken a more simplistic route instead of relying on special effects to make a point.

That said, Eradication is a pretty decent and watchable pandemic thriller that uses its slow burn to insinuate that people are only as good as the circumstance they are put into.

Where to watch Eradication

Olivia Cooke says there won’t be ‘egregious graphic violence towards women’ in House Of The...