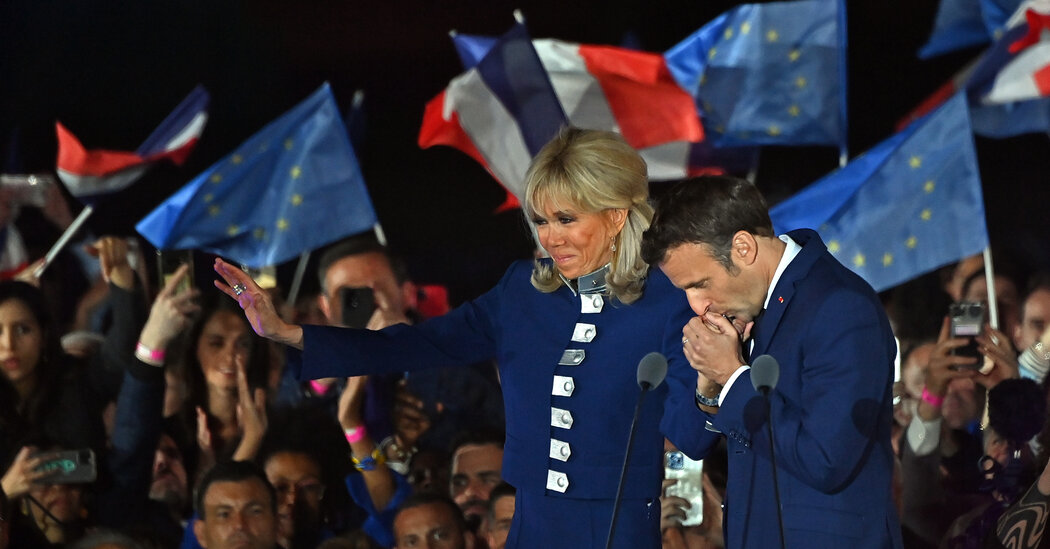 Emmanuel Macron’s victory in the French presidential election on Sunday was not just a victory for the young president’s vision of France and its role in the world, or centrism versus the far-right wing, though it was both of those things.

It was also a victory for fashion, especially high fashion, and the role it plays in reflecting French culture and heritage to the world.

If in doubt, simply consider the election night outfit of Brigitte Macron: a custom-made cropped Louis Vuitton navy jacket with silver military detailing and matching pants, perfectly coordinated with her husband’s navy suit. It was a choice that reflected the couple’s united front as well as the ideological battleground the election had become. And it acted as a subtle signal from an administration with a bent toward big business and the free market that those relations will continue to flourish in its second term.

Luxury, after all, has been cozying up to Mr. Macron since his first run for president, in 2017, and Louis Vuitton has been Mrs. Macron’s brand of choice since she became first lady.

Though she has worn other French labels, including Balmain (whose designer, Olivier Rousteing, posted a statement on Instagram lauding Mr. Macron’s re-election) and Alexandre Vauthier, none have been as regularly represented in her public wardrobe as Louis Vuitton. She has worn Vuitton during many of her most performative moments — those times certain to be preserved visually for history, when she serves as a representative of not just herself or her spouse, but the country writ large.

She wore Vuitton to her husband’s first inauguration in 2017 (a baby blue miniskirt suit with another military-inspired jacket). Vuitton to Bastille Day celebrations in 2017, 2018, 2019 and 2020. And Vuitton to state dinners at home and abroad, including the 2018 state dinner hosted by President Donald Trump in the Macrons’ honor. Just how many times Mrs. Macron has chosen Vuitton can be tracked on the Instagram account devoted to her style, @thebrigittestyle.

Though previous first ladies of France similarly associated themselves with classic French brands, with Carla Bruni-Sarkozy often wearing Dior and Hermès, and Bernadette Chirac wearing Chanel, and though the Macrons have supported French fashion broadly, hosting designers at two dinners in the Élysée Palace during Paris Fashion Week, Mrs. Macron is the first to work so closely with Louis Vuitton.

It is an alliance of political and business power that has served both sides very well.

Fashion, after all, is part of the bedrock of the French economy and its patrimony, and Louis Vuitton plays a very specific role in both. The industry accounts for one million jobs in the country, 2.7 percent of its gross domestic product and 150 billion euros (about $160 billion) in direct sales, according to the Fédération de la Haute Couture et de la Mode, the industry’s governing body.

And within French fashion, Louis Vuitton — currently celebrating the bicentennial of its namesake founder — is a tentpole brand, and the engine of LVMH, the world’s largest luxury group. As it happens, LVMH is owned and run by Bernard Arnault, the third-richest man in the world and a vocal Macron supporter.

Louis Vuitton is also the name on one of the newer museums in Paris, the Fondation Louis Vuitton, opened in 2014, built by Mr. Arnault, designed by Frank Gehry and designated as a “gift” to the city of Paris that will transfer to municipal ownership around 2070.

In late 2021, Mr. Macron helped inaugurate the Fondation exhibition of the Morozov Collection, the first time that major Russian collection was seen in Europe. (Though the loan required President Vladimir V. Putin’s sign-off, LVMH has declared its support for all those affected by “the tragic situation in Ukraine.”) Also last year, Mr. Macron posed with Mr. Arnault at the opening of the renovated Samaritaine department store, likewise owned by LVMH, saying its reopening was a metaphor for the reopening of Paris after Covid-19 isolation.

It’s a relationship that has not been without symbolic risks, given the associations with elitism, wealth and class implicit in the very term “luxury.” During the yellow vest protests of 2018 against rising fuel prices, many gilded boutiques on shopping thoroughfares like the Faubourg Saint-Honoré were targeted as examples of what was seen as Mr. Macron’s Marie Antoinette-like remove — a criticism that was revived by Mr. Macron’s opponents during the recent campaign. (Marine Le Pen was almost resolutely unbranded in her run for office.)

In choosing Vuitton again for her election night celebration, Mrs. Macron seems to be suggesting that her husband will be doubling down on this particular special relationship. Even though when it comes to that subject, she’s saying nary a word.

Ruben Randall - June 25, 2022 0
Money
The retired American professional baseball and football player Deion Sanders is among the few people who excelled in 2 sports at the same time....

The 10 Best Arnold Schwarzenegger Roles That Aren’t The Terminator