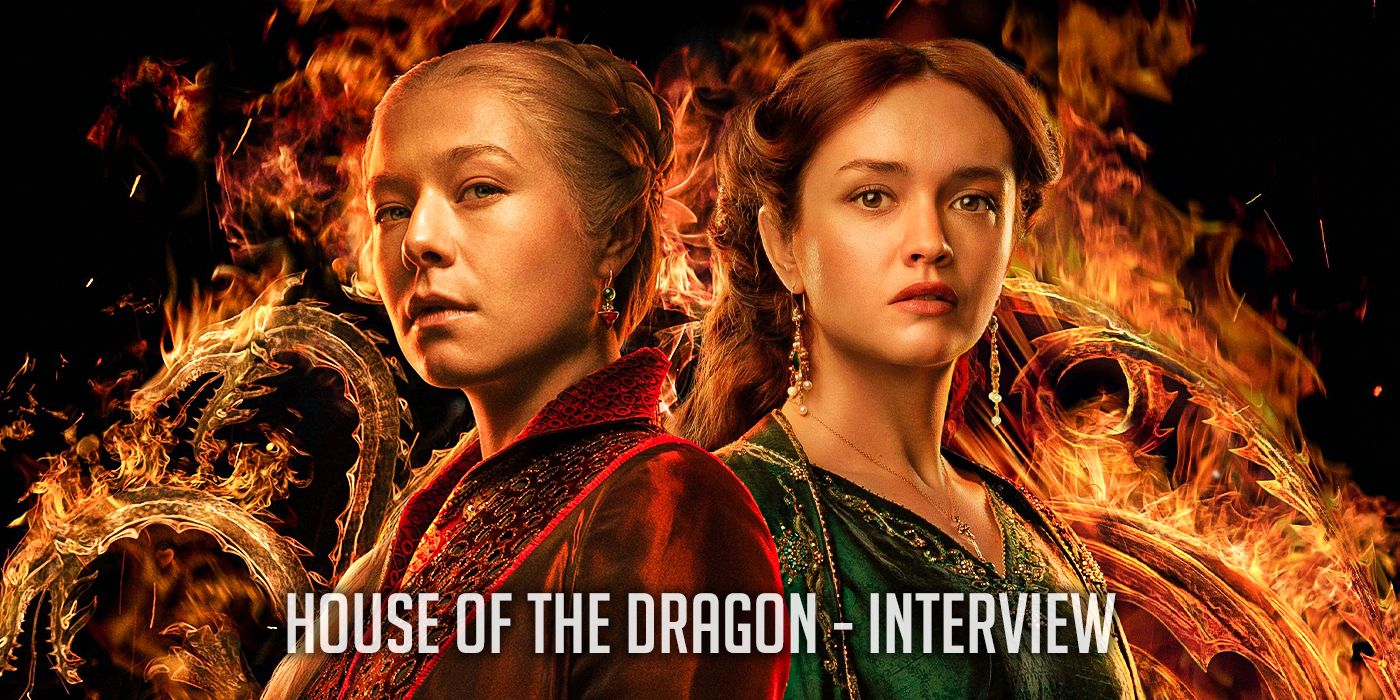 From co-showrunners Ryan Condal (Colony) and Miguel Sapochnik (Game of Thrones), who are also executive producers along with author George R.R. Martin, the HBO series House of the Dragon explores the Targaryen family with all the power, danger, rivalry, jealous, betrayal, murder and love that could either make them invincible or tear them apart. When you throw in powerful dragons, it becomes impossible to know who to trust or where loyalties lie, and the Iron Throne that they’re all fighting for is not kind in its embrace of whoever sits upon it.

Collider got the opportunity to sit down with co-stars Emma D’Arcy (who plays Rhaenyra Targaryen, the firstborn daughter of King Viserys) and Olivia Cooke (who plays Alicent Hightower, her childhood best friend now married to her father) talked about focusing on the humanity in the characters, coming from a complete prism of truth even if it isn’t the most moral truth, the stamina required by a job like this, developing a bond with a dragon, the evolution of the dynamic between Rhaenyra and Alicent, and where Rhaenyra’s power comes from.

OLIVIA COOKE: Ultimately, just the humanity in the characters. You’re always trying to come from a complete prism of truth, even if that truth, for them, is morally wonky. Yes, that reality exists in Westeros, in King’s Landing. When you just deal with the human being at hand, I think it feels a lot more grounded than if we thought of what we were actually trying to make.

EMMA D’ARCY: We were really lucky because, as a result of the pandemic, we actually had a very protected experience. We were swaddled because we couldn’t even have visitors to set. For 11 months, we really got to keep all of that fear and responsibility at the door.

COOKE: It was willful ignorance, wasn’t it?

D’ARCY: It was. Miguel Sapochnik, on of our co-showrunners, kept saying, “This is the good bit. Enjoy it. It won’t be like this.”

COOKE: Who’s to say. We don’t know what’s to come.

Did you ever have a moment of panic, where you wondered what you’d gotten yourself into? Is it always just about staying connected to the character?

D’ARCY: “How do I get off?” While we were making it, I never really had that, partly because there was no time. The stamina required by a job this long and with scenes that require so much emotional labor, means that there’s very little space for any other questions. I don’t know. Ask me in three months.

Emma, what’s it like to play a character that also gets to develop a relationship with a dragon and figure out what that bond is?

D’ARCY: Targaryens and their dragons are a relationship that starts at birth. You receive an egg when the baby is born, and if it hatches, that’s the start of a lifelong relationship. On the one hand, I’ve had cats that I felt that way about, and had a deep understanding, love and friendship with. For Rhaenyra, dragons are so embedded within Targaryen identity and power, and history. So many of Rhaenyra’s questions are about self-actualization and identity. And so, Syrax is as much about taking up the gauntlet of her own name, as it is about freedom and fun and relationship.

Olivia, your characters start as best friends that are so important to each other, but we know that relationship is going to continue to change. What is the turning point for Alicent, where her priorities shift?

COOKE: It’s incredibly bad parenting. Alicent has been groomed, from a very early age, solely to further her father’s political ambitions. When Alicent is used as a pawn, she’s a child. She doesn’t know any better. When she’s used as a pawn in Otto’s plan, it really drives a wedge between Rhaenyra and Alicent, that chasm only grows bigger and wider, as the series goes on.

What is it like to explore that relationship, knowing what used to be there for them, and then how that changes?

D’ARCY: That’s the whole thing. It’s that early relationship that enables feelings of betrayal, of loss, of resentment, and of jealousy. The foundation for all of that is in the childhood friendship.

Emma, there are so many interesting things going on for your character because she’s stuck in this position where she doesn’t think there’s any chance of being queen, and then that quickly changes. How do you wrap your head around that? Does she ever get to a place where she wants the title and position?

D’ARCY: That’s such a good question. What’s really interesting is that Rhaenyra has grown up with an expectation that there will be, at some point, a brother who will take on the heirdom and carry the lineage forward. She’s grown up always knowing that it’s not her destiny and that she will always be, to some extent, set aside as an aside. When we first meet her, a lot of her freedom and spirit comes from an identity built around that. It all starts unraveling, the moment that suddenly the rules change. What I find really moving about the character is when she receives the heirdom, she never understands that the rules have now changed for her. Things that she would have gotten away with yesterday, have completely different ramifications today. No one tells her that this role will require sacrifice, so she learns that the hard way, over years, through the series.

Where does her power come from?

D’ARCY: Honestly, from a really, really young age, she’s desperate to find a way of living authentically. She’s acutely aware that she feels differently from the way she is read. She’s able to fold all questions into a question of identity. So, when you have a question of power and ascension, that is also part of one trying to claim oneself and one’s name, that becomes really formidable. If that desire to be known is big enough, it will essentially go to any end.

House of the Dragon airs on Sunday nights on HBO and is available to stream at HBO Max.

Daniel Radcliffe reacts after fans wished the Queen could have lived to see his...

Ruben Randall - March 18, 2022 0
TV/Movies
Warning: This article contains spoilers for The Bachelor. Clayton's season of The Bachelor was one wild, bumpy ride, which all came to an end in a...