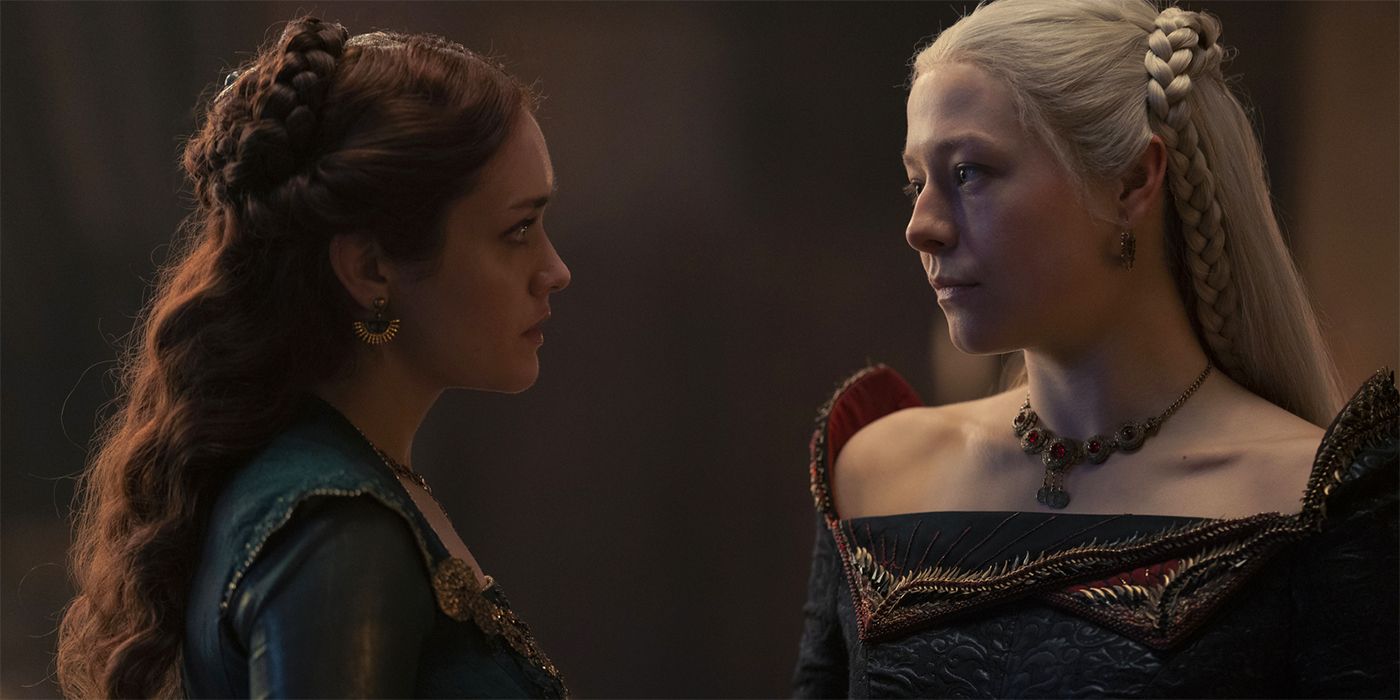 House of the Dragon, which arrives August 21 on HBO, is set to reignite the passionate fanbase of Game of Thrones with more dragons than ever before. Based on the battles and betrayals chronicled by George R.R. Martin in Fire & Blood, the new series starts with House Targaryen at the height of its power and proceeds to explore the chaos and bloodshed that follows.

At the heart of maelstrom stand two women: Rhaenyra Targaryen (played by nonbinary actor Emma D’Arcy, Truth Seekers) and Alicent Hightower (Olivia Cooke, Slow Horses). While the lore of Westeros marks them down as mortal enemies, showrunners Ryan J. Condal and Miguel Sapochnik (who also directs several House of the Dragon season 1 episodes) have added a backstory of intense friendship as teenagers which makes the events of their adulthood all the more tragically poetic.

Related: House Of The Dragon Battles That Could Be Bigger Than Game Of Thrones

During a recent round table interview, Screen Rant and other media outlets had to opportunity to speak to D’Arcy and Cooke about how they prepared for House of the Dragon season 1, why establishing Rhaenyra and Alicent’s early bond was so important, and how collaborative the expansive project was.

Your characters obviously get some of the biggest changes from the book, in terms of making you more friends at the beginning. Why did that feel important to you, and how did you really work to make sure that came through before the dissolution of it all?

Emma D’Arcy: I think it’s important because if there’s not a relationship, there is no wound, narratively speaking. I think something that you and I—and Miguel Sapochnik, one of our co-show runners and co-creators—have spoken about a lot is that he’s deeply interested in making sure that this is a psychologically-motivated narrative, and checking that we can track back from events that happen towards the end of the series through to experiences in childhood.

I think that’s why. It sort of just makes for better drama that they start in a place that’s so intimate. Added to which, it’s the thing that has enabled Ryan and Miguel to build a series around two women. That’s the other reason, because that’s the heart of the construction of House of the Dragon.

Screen Rant: When we spoke to your younger selves, they said that they were purposely kept from meeting you. Did you reflect back on your younger selves or get to see their work? Because we were amazed by the seamlessness and yet differences in that transition.

Olivia Cooke: Yeah, for sure. I didn’t realize they were kept from us.

Emma D’Arcy: Yeah, it’s a conspiracy. Who do we talk to?

Olivia Cooke: We just thought we were being really respectful of their process. We’re like, “We won’t impose anything on them, because also what do we know?” But I would be shown scenes that Emily [Carey] had done, almost to implant a memory. And that was really, really helpful for me. But we watched the first episode quite recently, and that was trippy.

Emma D’Arcy: Yeah, amazing. Because you finally see Emily and Milly [Alcock]’s beautiful work, and it was like watching a Targaryen home video or something. There is definitely an element of seeing yourself as a younger person, insomuch as you feel familiar and sort of recognize what’s going on there, and simultaneously feel very distinct from that person.

A lot of the cast has mentioned how present Ryan and Miguel were in this whole process. Can you speak on what stood out the most to you about Ryan as a collaborative partner in helping you find these characters?

Olivia Cooke: I’ve got to be honest and say that Ryan was really instrumental in crafting the script, but in terms of trying to find our characters, it was me and you at Miguel’s house trying to find our relationship and our backstory and who these who these women were before they started this campaign against each other.

Emma D’Arcy: We had at least two units running simultaneously all the time; sometimes three. So much production happening simultaneously. I guess what’s lovely about having a team of this size is you’ve got Miguel and Ryan as co-showrunners, and then you’ve got the writers’ team at large, which meant that you could have people from that pool on different stages simultaneously.

And that’s really nice, because [it] just means that you get different perspectives on the work at different moments. It just really refreshes the work, I think.

Given the glut of girlboss stories and scammers, and even the end of the Daenerys arc that drove people a little mad, there does seem to be more nuance to both of your characters’ backstories and arcs in terms of being women in this complicated world. How do you see your character playing into this grander vision for the show?

Emma D’Arcy: Crucially, in Westeros, there’s probably no space for a girlboss story, because it’s a patriarchal culture that keeps women tightly restricted. In terms of a show that speaks to patriarchy, misogyny, and power, I think one of the questions that it asks is, “If you are a woman looking to rule, how do you convince an electorate? How do you convince male subjects that you’re not other?” And I feel that to be an incredibly resonant question today. We’re still picking male leaders.

But I think it’s a really nuanced piece of work, because life is nuanced and complicated. You have a load of people who have undergone all sorts of damage, and they have wounds that are motivating various behaviors. And simultaneously, they are situated within a system that has sort of plans for them. And all of those are forces that are acting on the psyches and bodies of these people. I think it’s a three-dimensional piece of work. I don’t think it’s a propaganda machine. It sits in complexity.

Screen Rant: Speaking of the patriarchy, it is to blame for the rift between you in your adulthood. What is it like to play those scenes, knowing the friendship that you once had and then the choices that have led you to this very different place?

Simultaneously, I think some of the stuff that’s really fun is [that] we are both in court a lot of. Which means we’re in public space a lot, which means we can show about 5% of what is going on beneath the surface. And that is really playful space, where a character is trying to present one thing and feeling another.

Can you talk about the process of finding these character relationships? Was that a long process, or was it just a couple of meetings and then you jumped into discovering it as you’re shooting?

And then you actually shoot an episode and regret everything, and then a bit later on, you feel better. It’s a really elongated process. Probably when we finished, I was like, “I’m ready.”

Olivia Cooke: Yeah, completely. By the end of filming, you’re like, “Oh, this is who she is.

Screen Rant: The dynamic between Damon and Rhaenyra is both fascinating and uncomfortable. But for you, Emma, what is it like filming with Matt Smith and exploring that relationship?

Emma D’Arcy: Honestly, it’s been so good. I actually really owe [Matt Smith] a lot, because I’ve learned a huge amount about my job from him. And we had some extended period of time where it sort of was just us.

But I’ll tell you that what’s really amazing is he has such a gift for finding freedom on camera. He doesn’t want to know what happens. He wants to surprise you; he wants the thing to live. And as soon as I understood that, not only is he a gift of a scene partner, but it’s also a privilege to know what someone needs. Knowing that, actually, it’s just a complete curveball at 6pm. You offer that, and someone is suddenly electric and with you and excited. It is a pleasure. He’s taught me a lot about doing my job.

House of the Dragon Synopsis

House of the Dragon, the eagerly awaited prequel to Game of Thrones, is based on George R. R. Martin’s Fire & Blood. Set some 200 years before the events that unfolded in Game of Thrones, this is the remarkable, turbulent story of the House of Targaryen.

House of the Dragon premieres August 21 on HBO and HBO Max at 9pm ET/PT.

Rihanna Houses And Cars- How Rich Is Rihanna worth?

Ruben Randall - September 25, 2022 0
Money
After being named the richest female musician in the world, Rihanna has definitely carved a niche for herself in the music industry. The 33-year...