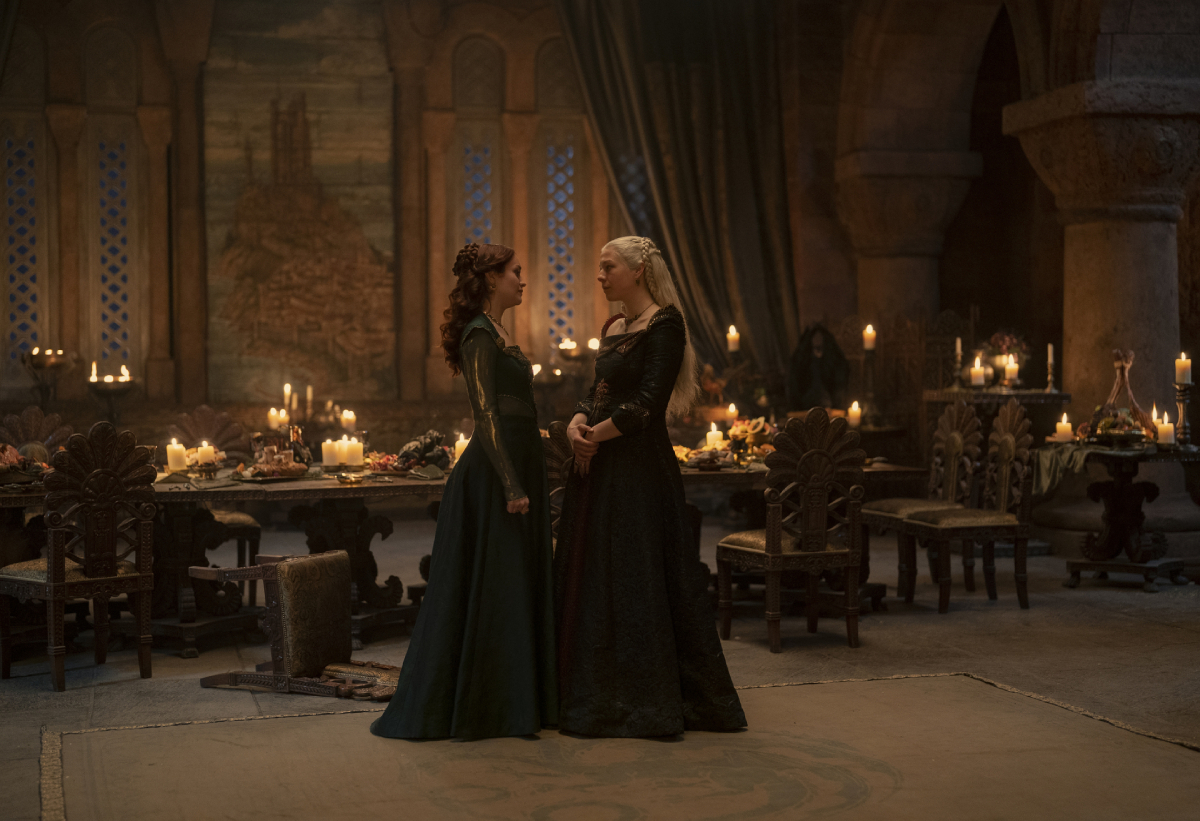 Rhaenyra and Alicent’s relationship has seriously deteriorated since House of the Dragon began. The pair were best friends when they were young, and fans even noticed queer undertones between the two of them. Emily Carey, who portrayed a young Alicent, has previously discussed this idea. Recently the actors who took over the roles of Rhaenyra (Emma D’Arcy) and Alicent (Olivia Cooke) shared whether that sexual or romantic spark exists in their adult characters.

[Spoiler Alert: This article contains spoilers for House of the Dragon Episode 8.]

At the start of House of the Dragon, Rhaenyra and Alicent are best friends. Certain scenes portraying their close relationship made some fans wonder if the pair were interested in something more intimate.

“I mean, we kind of started that discourse,” Emily Carey told Variety. “We were in the rehearsal room…I believe it’s episode 4. I was sat on the bench. It’s not necessarily something we had talked about yet. We were doing that scene, and Milly and I looked at each other like, ‘It kind of felt like we were about to kiss? That was really weird!’ And so we talked about it.”

Carey, however, didn’t expressly state the nature of her character’s relationship with Rhaaenyra. “We didn’t intend to play it. We weren’t ‘making them gay’ or ‘queerbaiting,’ or anything like that. It’s just if you want to read into it and see it like that, do it. If you want to see them as more than friends, do it. If you don’t, then don’t.”

See also  Mike Pence, Mike Pompeo needed to be reminded that the US would not strike Iran, former Pentagon chief says

“Being a queer woman myself, it was something that I was conscious of,” Carey continued. “But I wasn’t consciously putting it out there. They’re 14-year-old girls, they don’t know the difference between platonic and romantic. They don’t even know what the words mean, let alone what the feelings mean.”

In House of the Dragon Episode 6, Olivia Cooke and Emma D’Arcy took over as adult Alicent and Rhaenyra. Long before this, however, the pair’s relationship began to deteriorate. It all started when Alicent married Rhaenyra’s father and escalated as the years passed.

Now in episode 8, Westeros is on the brink of an all-out war pitting Alicent and Rhaenyra against each other. However, there is a brief moment where the pair seem to miss the friendship they once had.

“Rhaenyra and Alicent have always been trying to pull themselves back from the precipice,” co-showrunner Ryan Condal said in a featurette.

“The idea is that they never really wanted to get into this rivalry together, but they were driven there by the patriarchy, by the men in their lives. And they have a real friendship and a relationship and a real love for one another that might have gotten cold and stale over the years, but it did exist.”

While speaking with The New York Times, Cooke and D’Arcy were asked if any romantic or sexual spark remains between their characters. “I don’t know if Alicent knows what it feels like to feel those things now,” Cooke said.

“There’s layers and layers of repression; sexuality and lust are probably a prehistoric, sedimentary layer by now. From Alicent’s point of view, I don’t think she’s that self-aware, in terms of what she’s feeling, to know what’s propelling her to reach out to Rhaenyra again,” she continued.

“The hurt and pain is so dominant that I don’t know if there’s a space, at this point, for a conscious interaction with sexual lust, but she definitely yearns for the old physical intimacy that they shared. It’s different from what she shares with her current husband and her children. A different form of contact.”

House of the Dragon airs Sunday nights at 9 p.m. ET on HBO.