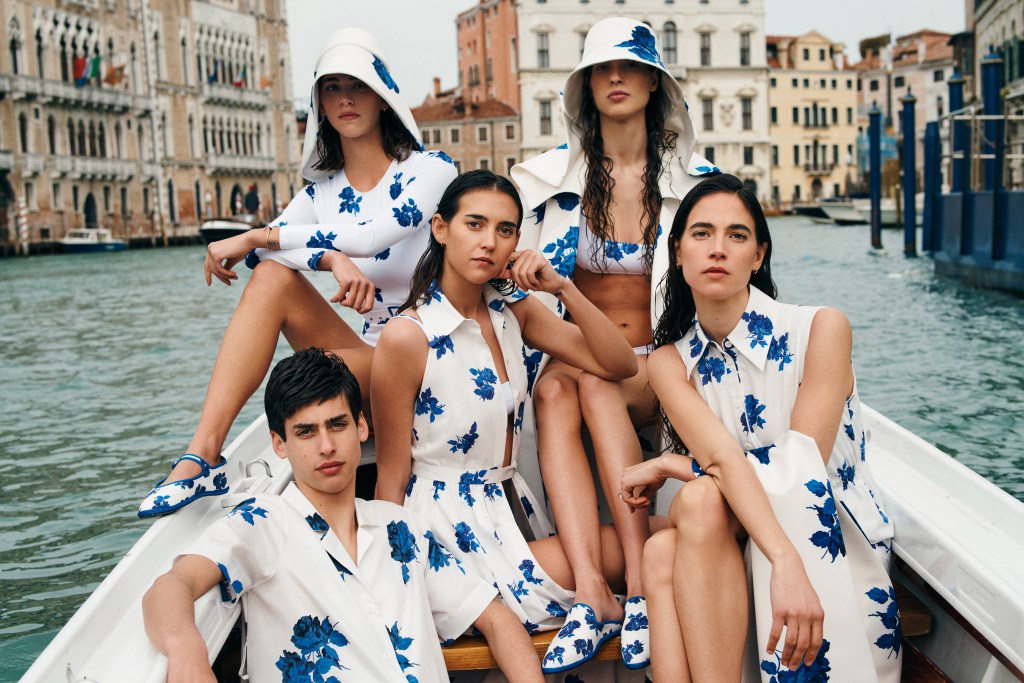 VENICE — The intimate, informal lunch sisters Vera and Viola Arrivabene hosted on Thursday in their family home nestled on the top floor of the majestic Palazzo Papadopoli here offered a momentary reprieve away from the buzz of the city, which is gearing up to the Biennale Arte’s official opening on Saturday.

While art connoisseurs and curators hopped from side to side of the Grand Canal ticking off vernissages and previews, the small gathering feted the capsule collection the Arrivabenes’ brand ViBi Venezia developed with London-based designer Emilia Wickstead, who was also in attendance.

Bedecked in one of her signature floral patterns in a blue shade, Wickstead joined the Arrivabenes in welcoming friends and fellow designers including Luisa Beccaria and her daughters Lucilla and Lucrezia, Aquazzura’s founder Edgardo Osorio and violinist Charlie Siem, among others.

The two parties joined forces on a limited-edition footwear collection splashing Wickstead’s floral prints onto a series of furlane, the traditional Venetian slippers that the two Italian sisters have helped gain international recognition for ever since they launched their brand in 2015.

“Viola is the number-one fan of Emilia, since ever,” said Vera Arrivabene pointing to her sister. “Emilia and I met at a wedding and Viola told me ‘you’ve met Emilia Wickstead!’.”

“Then last year I moved to Positano for two months, and at one point there was Emilia, full of dresses, shooting a campaign and I was like ‘ferma lì’ [‘Stop there,’ in English]” recalled Viola Arrivabene, adding that she ended up helping on the set, too.

Wickstead said that even if she met the sisters on two different occasions, she fell for their bubbly personalities right away. Having spent four years in Italy during her teenage years, and being inspired by Italian culture ever since, further cemented the connection Wickstead felt with the sisters and that naturally evolved into a collaboration.

“I just fell in love with these girls, this family and their characters and the story behind why they started the shoes,” said Wickstead, praising the “workmanship and quality” of the ViBi Venezia product.

The Arrivabenes catapulted a low-key, local footwear style into a global one. Dating back to the 19th century, the furlana was originally produced from left-over fabrics and old tires, becoming a success among gondoliers as the rubber sole allowed them to have a firm grip while rowing without scratching the surface of gondolas.

Wearing the style since childhood, the Arrivabenes were regularly asked by their friends abroad to bring them pairs whenever they met them, so the sisters sensed the demand for the style could have a bigger scale. Launching a brand focused on the concept showed their willingness to support local artisans and celebrate their hometown, too. 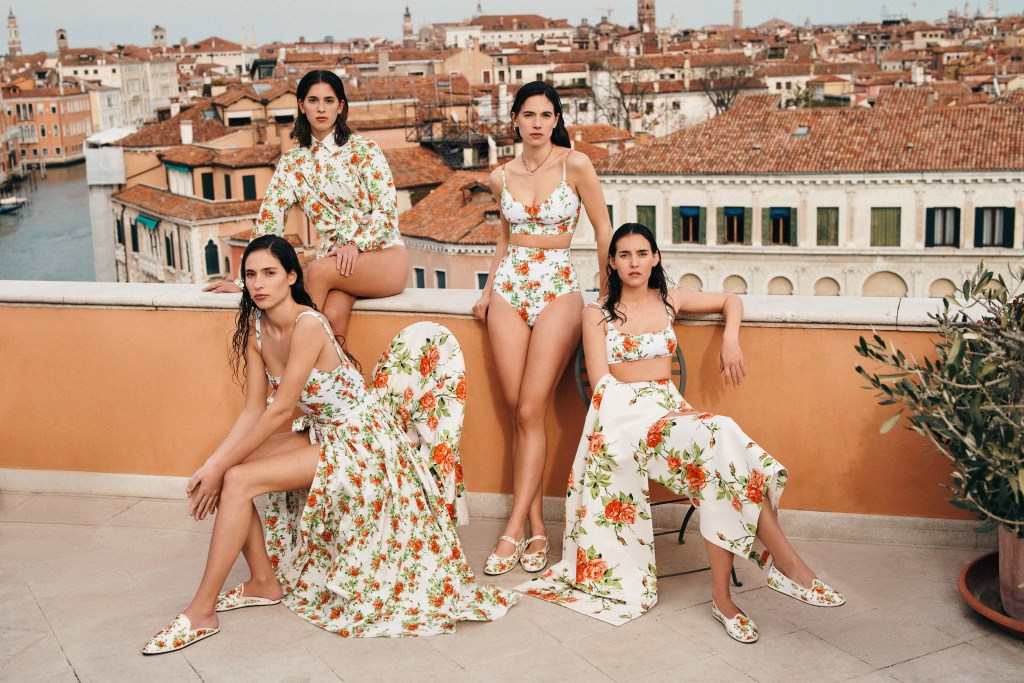 For this capsule collection, three styles of ViBi Venezia’s Timeless line — a classic slipper, the sabot mule and a flat mary jane — were reinterpreted in lightweight canvas and rendered in signature Wickstead motifs in a palette of orange, apple green and lapis blue tones. The patterns were conceived to complement the Emilia Wickstead swimwear range presented for pre-fall 2022.

“This [project] made sense with our swimwear and caftans and sort of holiday vacation wear, because when I think of those pieces, I think of these slippers. I love having a complete look, but I never completed it because I never felt I had the perfect accessories to pair the look with,” said Wickstead.

Wickstead and the Arrivabenes further agreed on the shared target the respective brands address. “The idea of the woman that dresses Emilia is very similar to the one we have at ViBi Venezia: she’s somehow timeless, beautiful and very chic,” said Viola Arrivabene. 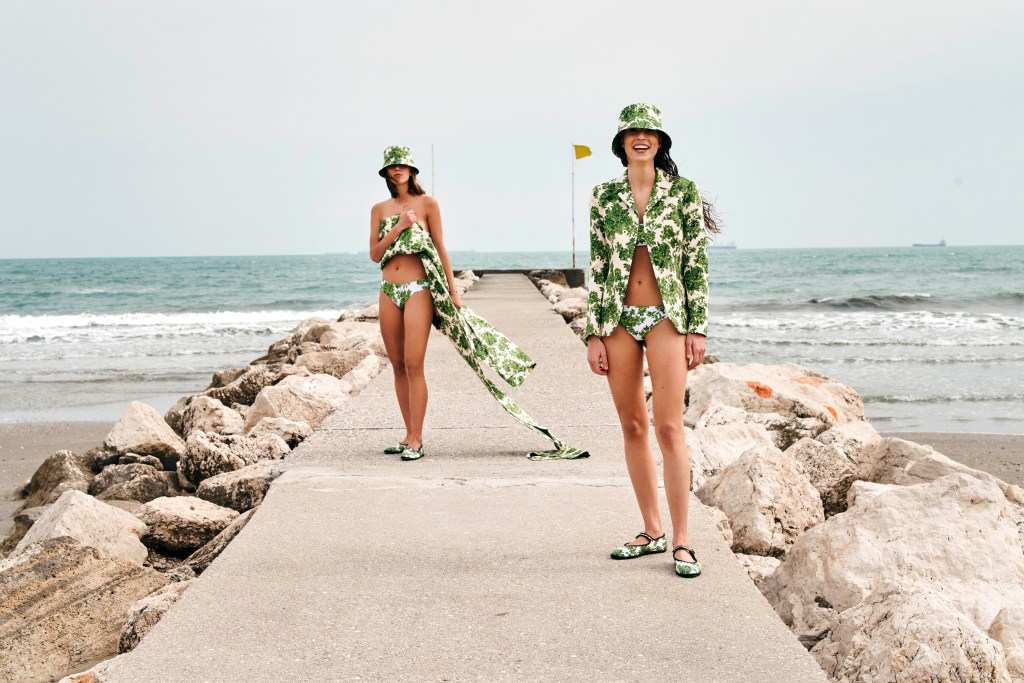 The sisters appear in the campaign dedicated to the capsule, joined by their younger siblings Mafalda, Maddalena and Leonardo, all sporting Wickstead’s floral patterns head to toe while posing in some of their favorite Venetian spots in front of photographer Edd Horder. While the images evoke a fresher take on the Dolce Vita glamour, Wickstead playfully recalled how the shooting tested the endurance of the siblings on a cold, windy day last month.

Priced starting from 130 pounds, the ViBi Venezia x Emilia Wickstead collection launched this week on both brands’ e-commerce, at Emilia Wickstead’s store on London’s Sloane Street as well as on Matchesfashion.

Originally founding her business as a made-to-measure atelier, Wickstead’s collections now comprise ready-to-wear collections, bridal and bespoke, table linens and made-to-order services, but the designer might further expand her scope soon. “We’re always thinking about what our woman needs and wants and this collaboration is part of that journey… so building up the world of Emilia Wickstead is something that we are doing and you will definitely see more of it in the coming months,” she teased. 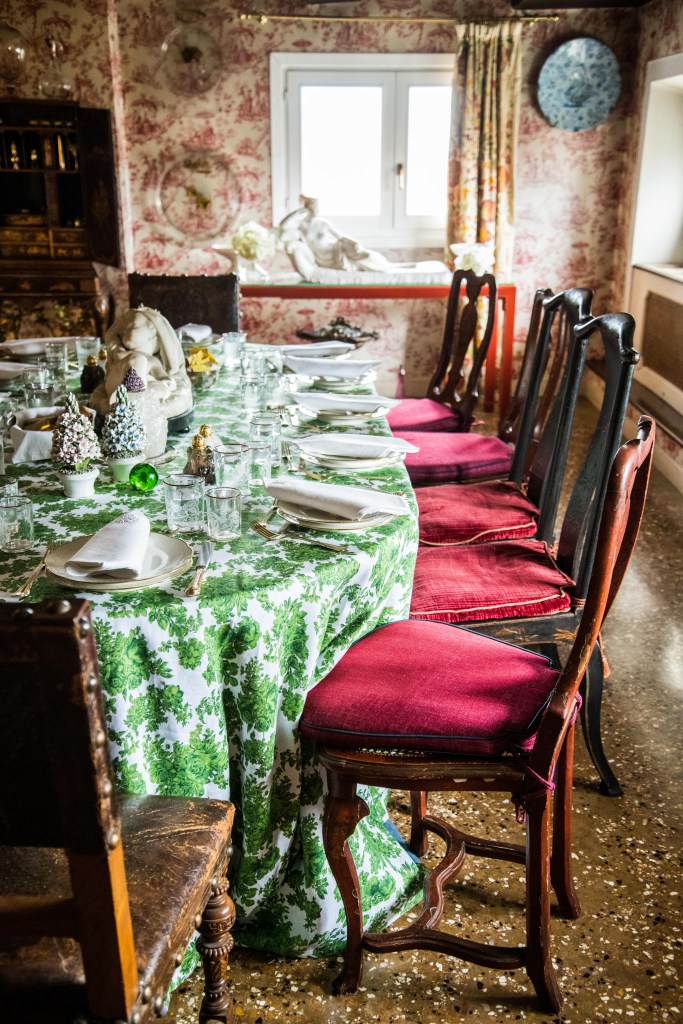 The scene at the intimate lunch the Arrivabenes hosted to fete the launch of the capsule collection with Emilia Wickstead.
Claudia Rossini/Courtesy of ViBi Venezia

Meanwhile, the Arrivabenes are to take their biggest step business-wise, opening their first physical store next month. Located in Milan’s Piazza del Carmine, in the heart of the city’s artsy Brera district, the shop will carry the whole ViBi Venezia offering, which includes the signature velvet slippers as well as different styles crafted from silk and damask fabrics, among others.

“We were thinking about opening it also here in Venice but we didn’t find the right place, we’re looking for it,” said Viola Arrivabene, underscoring that Milan is strategic from a commercial point of view as many of the brand’s customers are based in the city. “Vera lives in Milan and this is going to be an office and showroom in addition to boutique, so it will all happen under the same roof,” concluded the cofounder.