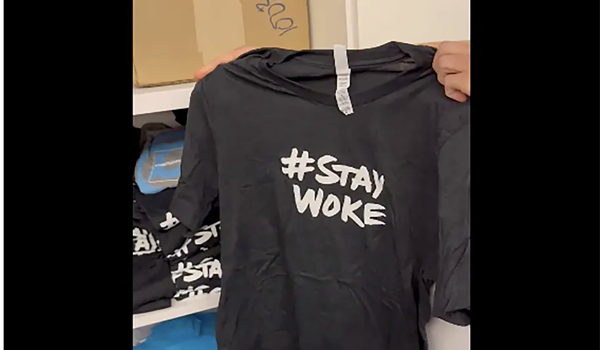 On Tuesday night, Elon Musk was rummaging around the Twitter offices and found a closet full of Stay Woke shirts. The shirts had once been worn by Twitter founder and St. Louis native Jack Dorsey.

Musk, who bought Twitter for $44 billion last month, has orchestrated a massive shake-up at the tech company and introduced many controversial new ideas to the platform, including reinstating former president Donald Trump’s Twitter account. Trump was banned after promoting the big lie that the election was stolen and inciting a mob to storm the capitol and overturn free and fair election results on January 6.
Musk mocked the shirts, sharing a video on Twitter of the closet. “Here we are at the merch thing and there’s an entire closet full of hashtag woke T-shirts.”

Someone laughs in the background, calling it a secret closet. Above the video, Musk wrote “Found in closet at Twitter HQ fr” with two laughing emojis. (The “FR” stands for “for real.”)

We can laugh at corporate pandering just as much as Musk or anyone else, but Ryan Mac, a tech reporter for the New York Times, says that the shirts were actually created by Black employees at Twitter after Ferguson for each other. Jack Dorsey popularized them (or appropriated them, depending on whom you ask), because he was struck by the stark difference between being on the ground in Ferguson and what was being shown in the media.

Elon Musk has said he’s about context on tweets, so here’s context for these shirts: They came from Twitter’s Black employee resource group and were popularized by @jack, who wore a version around to conferences to support the group (and was sometimes ridiculed for it). pic.twitter.com/Lw7aXJSBke

But Musk was not laughing at the shirts because he thought they were insincere. He followed that first Tweet up with a read of the #StayWoke shirt that he has since deleted.

“#StayWoke shirts stem from the the Ferguson protests. Obama’s own DOJ proved this and exonerated the cop. ‘Hands up don’t shoot’ was made up. The whole thing was a fiction.”

The Justice Department did conclude that there was no reliable evidence that Michael Brown put his hands up. But the shirt also is not about hands up don’t shoot.

“To me, my interpretation of what it means, and it has evolved a little bit over time, is really being aware, and staying aware, and keep questioning,” Dorsey said when he was asked about the shirt while doing an interview with Ferguson activist DeRay McKesson. “Being awake, and eyes wide open around what’s happening in the world.”

Also, the Department of Justice said that the Ferguson police department was guilty of racial profiling. The report eventually caused top officials to resign.

Travis Hunter Shares Why He Decided He Wanted To Play For...