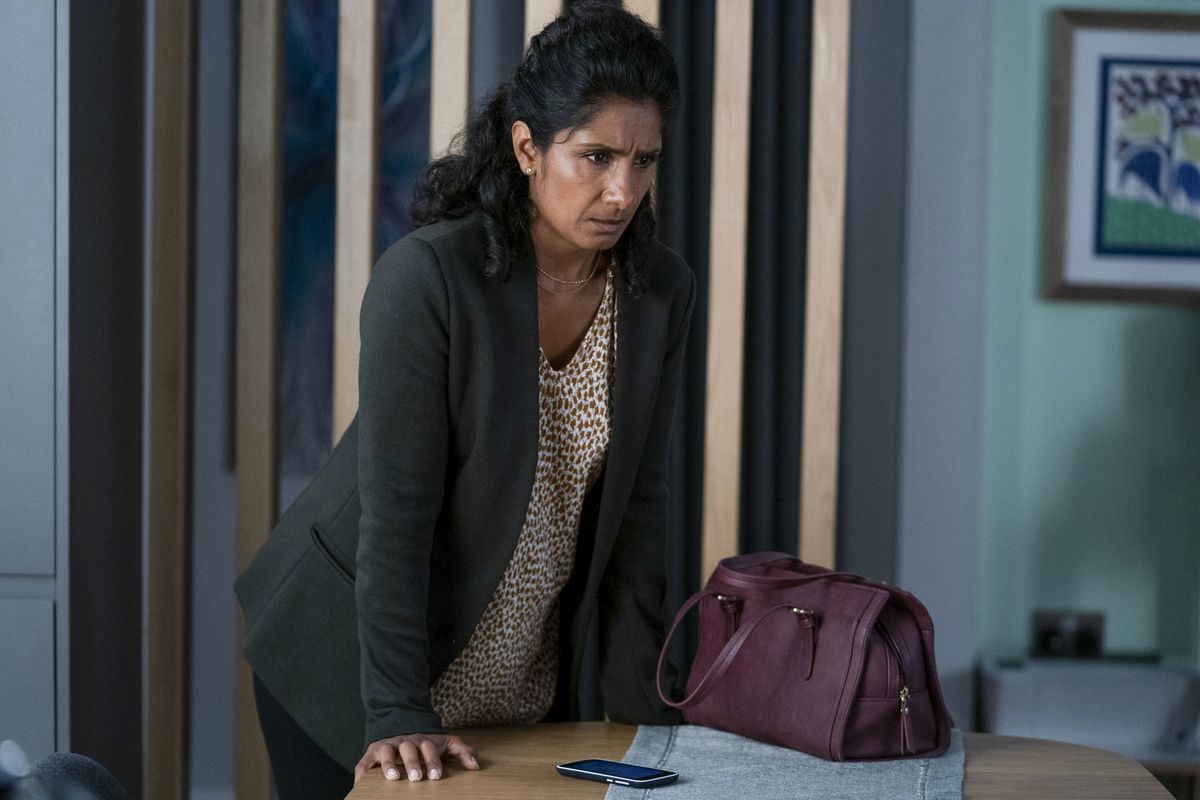 Suki Panesar is terrified she’ll go down for murder in Tuesday’s episode of EastEnders (7:30 pm. see our TV Guide for full listings).

And it’s being treated as murder!

When Suki bumps into Eve Unwin and son Kheerat Panesar she blurts out that Ranveer has been found dead.

Suki frets, as she still believes that she killed Ranveer and Ravi helped her cover it up, not realising that Ravi was the one who finished him off.

Nina Gulati is already worried that she’s being treated as a suspect in Ranveer’s killing. But Suki is also in the hot seat when she’s called in by the police to talk about Ranveer’s death.

When Ravi also gets a call from the police, Kheerat and Nish are listening in. Meanwhile, Nina insists to Ravi that she won’t be taking the fall for Ranveer’s death.

Will Ravi Lay the blame at Suki’s door?

Jay Brown is quietly falling apart following his girlfriend Lola Pearce’s brain tumour diagnosis. The pressure of trying to hold it together for Lola and her daughter Lexi Pearce is almost unbearable.

When Jay ends up lashing out at Ravi Gulati, Ben Mitchell realises how mush stress he’s trying to deal with. He asks Mitch Baker and Harvey Monroe to take over some duties at the funeral parlour to let Jay spend time with Lola in the hospital.

In the hospital, Lola starts to think about what could happen after her surgery, leaving her feeling anxious. Jay visits and tries to be strong for him but she realises how much he’s hurting.

Lola sees through Jay’s strong act and she tells him it’s okay to be scared. The couple share a sweet and loving moment before Lola is wheeled off for her surgery.

Linda Carter is grateful to Alfie Moon for cheering up her day on Halloween and encouraging her to have some fun.

Feeling pleased with himself, Alfie’s day is about to get more fraught however, when he gets an ear bashing from ex Kat Slater!

Kat is fuming with Alfie for letting the twins Bert and Ernie bunk off school to spend the day with him. Putting her foot down, she insists that Alfie will NOT be having the boys over the weekend.

Feeling sorry for Alfie, Linda comes up with a plan to help him see his sons. Will her idea work?

Also, Jean Slater is upset that Harvey Monroe seems to be moving on.

EastEnders continues on BBC One on Wednesday at 7:30 pm.

What Is Selena Gomez’s Net Worth? How The Singer Makes Her Money

Ruben Randall - December 13, 2021 0
TV/Movies
West Side Story and Belfast lead the film nominations for the 2022 Critics Choice Awards with 11 each, and Dune and The Power of...