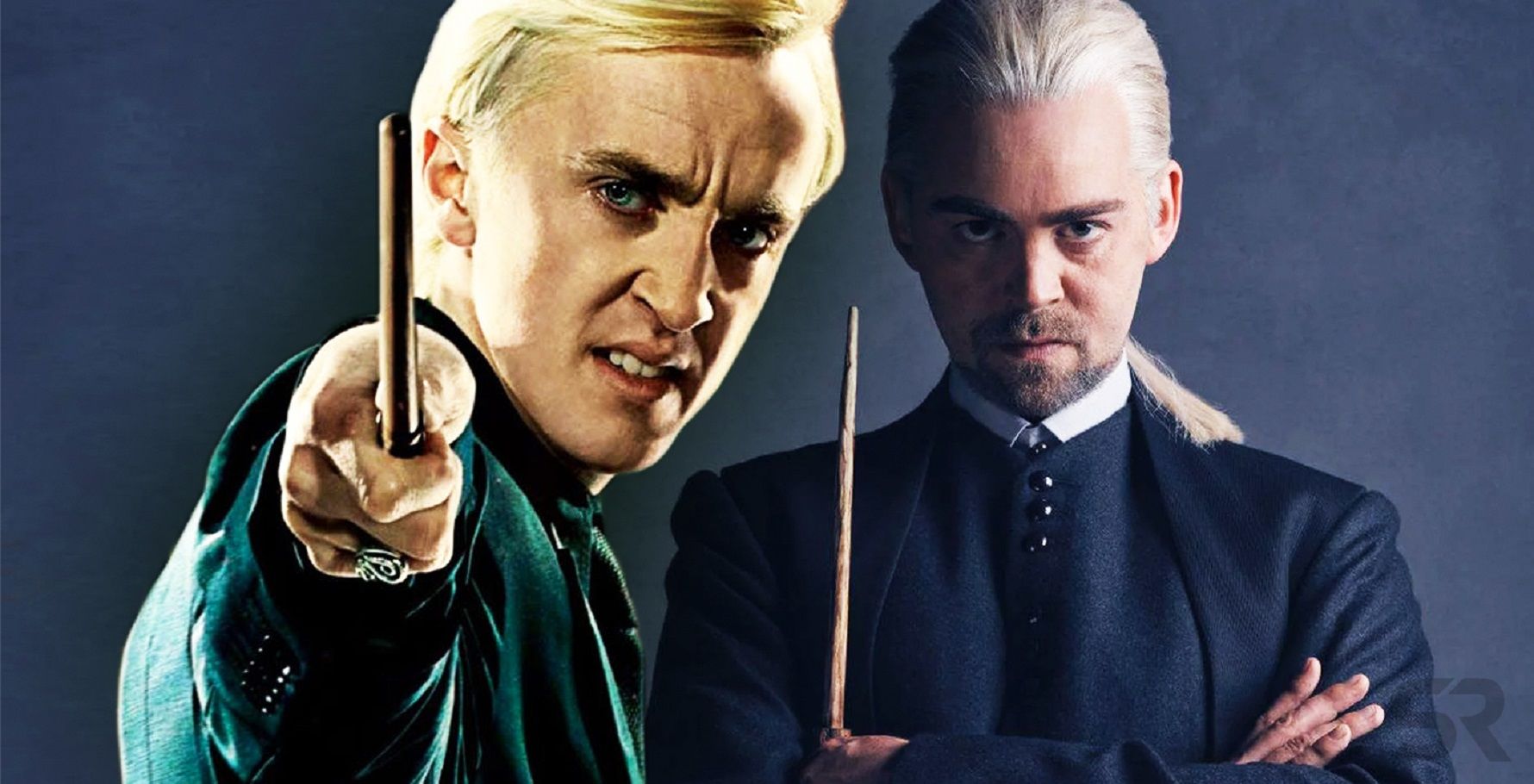 Draco Malfoy is snobby, bigoted, arrogant and generally horrible throughout most of the Harry Potter series. This is why, as an adult and wizarding parent, he’s much more refreshing, especially given how strained Potter’s own relationship with his child is in Harry Potter and the Cursed Child.

Malfoy was easy to hate in the books, and had Tom Felton not portrayed the character in the movies, he likely wouldn’t have had as large a fan following. Still, like Dudley, Kreacher and other despised characters, Draco wasn’t all bad. He proved to be a sympathetic and even redeemable wizard on numerous occasions throughout his life. Let’s take a look!

10 He Became More Tolerant, Thanks To His Wife

Draco might have ensured that he married another pure-blood to satisfy his family, but he was likely very much in love with Astoria Greengrass, who taught their son to be much more tolerant of half-bloods and Muggles than Draco’s own parents taught him.

The younger sibling of one of Draco’s classmates, she obviously fostered the same sort of kindness and understanding in her husband. While she was tragically taken from her family too early, her influence lives on in the compassion and care that Draco gives their son, Scorpius. Harry Potter has even learned to be more caring through his old enemy’s influence.

9 He Initially Wanted To Be Friends With Harry

While Draco’s desire to be friends with Harry Potter upon first meeting The Boy Who Lived could be chalked up to the fact that Harry was famous (or even possibly a dark wizard since he technically bested the Dark Lord himself), it can’t be forgotten that he did extend his hand in an offer of friendship to a wizard he’d never met before.

It’s not the most redeeming moment of his life, but it does demonstrate that Draco isn’t a complete monster, even if he did make the offer while simultaneously insulting Ron Weasley in the process. Things could have been quite different had they been able to make friends as their sons did.

If the best thing someone can say about you is that you didn’t take out someone you were asked to use an Unforgivable Curse on, it’s really not saying much. Nevertheless, the fact that Draco showed such distress the entire year he was ordered to off Dumbledore by Voldemort demonstrates how scared and conflicted he felt. He probably knew it was punishment for his father’s failure all along and that he was meant to fail, but he tried to cling to the idea of it being a great honor.

In the end, Draco could not bring himself to take his headmaster down, forcing Severus Snape to do the dirty work once again.

7 He May Have Never Joined The Death Eaters

Although Draco reveals his Dark Mark to Albus Dumbledore in the movie Harry Potter and the Half-Blood Prince, it’s never explicitly stated in the books that Draco Malfoy even became a Death Eater. It’s heavily alluded to yet carefully avoided, like many other subjects, remaining ambiguous and leaving readers to decide for themselves whether or not he truly made the commitment.

If Draco didn’t join the Death Eaters, it’s possible that he still had misgivings about becoming one all along. This makes sense, since many of his actions seemed to be fueled more by his need to impress his father than his own desires.

6 He Didn’t Use The Time-Turner To See Astoria

In his Hogwarts days, Malfoy would have used a Time-Turner to satisfy any whim out of pure selfishness and greed, but the somber Malfoy of the present, who has dealt with prejudice, hateful rumors and the bullying of his own son, has proven his maturity and sense of responsibility by not using his family’s Time-Turner to visit his deceased wife.

Malfoy obviously misses Astoria terribly, and he didn’t get nearly enough time with her due to her ill health, but he knew it would be wrong to visit her in the past and only confuse her or possibly change time itself in the process.

During Harry Potter and the Cursed Child, Harry remains indifferent to Malfoy’s pleas for help in securing a safe, happy place for his son at Hogwarts. He only needs Harry to help dispel rumors, but Harry can’t be bothered with his old bully. While this seems fair, given Draco’s treatment of Harry in their school days, Harry’s selfish actions ultimately impact his own son, who becomes Draco’s son’s best friend at Hogwarts.

RELATED: Harry Potter: 10 Facts About Draco Malfoy They Leave Out In The Movies

Even after these difficulties, Malfoy and Potter manage to work together to save their sons when they mess about with a Time-Turner and alter history. It can’t have been easy for either of them, but the greater good was also at stake.

4 His Wand Had A Unicorn Core

We know that Malfoy couldn’t have always been bad, and that his personality and bullying behavior were at least partly influenced by his parents. The evidence is clear within his wand, which chooses the wizard. Draco’s wand had a unicorn core, which, according to J.K. Rowling herself, tend to be the wands least inclined towards the Dark Arts. Perhaps the hawthorn of his wand also signified an inner conflict, which reflected his desire to be good against his need to prove himself to his father.

Maybe Draco’s own wand knew that he would turn out to be a good wizard in the end long before anyone else did (save perhaps Albus Dumbledore)?

3 He Raised His Son To Be Open-Minded

Not only did Draco continue to raise his son in a compassionate manner after he lost his wife, but he also encouraged him to make friends with anyone, half-blood or not. He decided to support Scorpius in any relationships the boy wanted, even if that meant marrying a non-pure-blooded witch or wizard.

Given that Scorpius is sweet on Rose Granger-Weasley, that may not even be an issue if she returns his feelings one day, but it’s a far step away from the intolerance with which Draco was raised. It’s also a lesson Harry has to learn, as he forbids his son from making friends with Scorpius.

Even though Harry has more children, Draco has much more experience in dealing with a child who’s different from himself. Not to mention being raised by parents who want something different than you do. So, when he offers Harry Potter parenting advice when Potter is struggling with Albus, it’s a very kind thing to do, especially when Harry doesn’t want to help Scorpius avoid the rumors at Hogwarts.

“Maybe the black cloud Bane saw was Albus’s loneliness. His pain. His hatred. Don’t lose the boy. You’ll regret it. And so will he. Because he needs you, and Scorpius, whether or not he now knows it,” he advised his old nemesis.

When Harry and his friends were caught in Harry Potter and the Deathly Hallows, Draco was given the chance to redeem his whole family in the eyes of the Dark Lord by identifying Harry. Instead, he refused, claiming that he couldn’t be sure (given how disfigured Harry’s face was at the time).

Draco must have absolutely known that it was Potter but didn’t give the young wizard away, saving his life in the process. It would have been a really easy way to gain back Voldemort’s favor and assist his shamed family, and he made the difficult choice to do the right thing instead.

NEXT: Harry Potter: 10 Facts About the Malfoys They Leave Out in the Movies

Jared Kushner was treated for thyroid cancer while working in the...

Ruben Randall - July 29, 2022 0
Celebrity
Jared Kushner was diagnosed and treated for thyroid cancer while working in the White House. Kushner wrote about his cancer scare - which never...