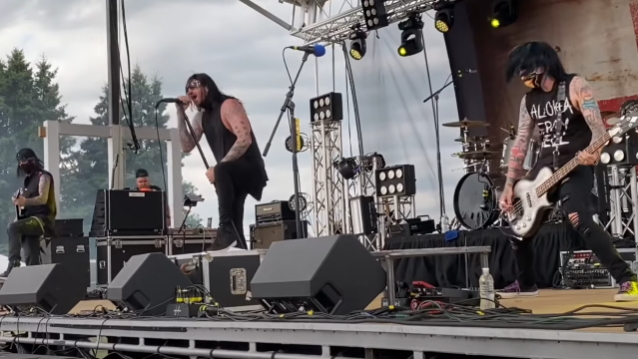 Industrial metal pioneers DOPE will release their seventh studio album, “Blood Money Part Zer0”, on February 23, 2023. In a move to demonstrate the band’s sincere appreciation to their loyal fanbase for more than two decades, they are giving away the album for free digitally. Longtime fans, curious listeners and people that enjoy gratis music can sign up to download the album for free on the band’s web site. A physical pre-order will also be available for fans who want to purchase the new album in various formats.

“I am so grateful to the fans who have supported me and this band,” says frontman Edsel Dope. “I appreciate your patience and the trusting relationship that we have built together.

“I never halfass anything and believe that anything worth doing is worth doing right, so sometimes it takes longer than expected. I’ve come to learn that the time between releases only makes our connection stronger and the bond between this band and our fans is unbreakable. I truly love you all.”

DOPE has sold more than a million combined albums and has amassed an audience of nearly two million monthly listeners on Spotify while racking up more than 100 million plays on its cult classic “Die MF Die”.

To coincide with the announcement of “Blood Money Part Zer0”, DOPE is giving away two doses of new music. The songs “Believe” and “No Respect” are now available via all streaming partners as well on the band’s web site. Fans that sign up for the free full-length download of “Blood Monet Part Zer0” will receive instant downloads of the songs. “Believe” displays the band’s commitment to their industrial/electronic roots, while incorporating chunky guitar riffs over driving drumbeats, as Edsel delivers a melodic a war cry of love, loss, and growth. “No Respect” is a brutal banger that showcases the band’s technical capabilities and refined musicianship, while Edsel’s growling vocals deliver the venomous message of “You ain’t got no respect” — a sentiment everyone can relate to.

DOPE has also released an introspective infomercial which doubles as a behind-the-scenes look into the real life of Edsel, his private life, and his many ventures outside of DOPE. A very private person, virtually inactive on social media, Edsel is intentionally secretive about what he does with his time between records and tours. This video serves as a direct message to the fans, inviting them to see behind the curtain of the mysterious man, whose creativity they have supported for years. In the end, the video is ultimately an introduction to “Blood Money Part Zer0” and will feature teaser clips from the upcoming music videos for “Believe” and “No Respect”, but is also so much more.

DOPE will hit the road in 2023 in support of “Blood Money Part Zer0” as part of the “Rise Of The Machine” tour with STATIC-X and FEAR FACTORY. The 42-date trek kicks off February 25, 2023 in San Francisco, California and wraps up April 15, 2023 in Los Angeles, California.

During his time away from performing with DOPE, Edsel has become a successful creative director, project manager and entrepreneur. As part of a three-year stint with Omnicom’s GMR Marketing, Edsel headed up music programs for the NFL, MLB, NASCAR, WWE, UFC and many others while also lending his creative marketing talents to brands such as Indian Motorcycle, Nissan and “American Horror Story”, to name a few. Edsel, who now resides in Los Angeles, is a father, has a family and is also the owner operator of the3D/4D capture stage to the stars. Ecco Studios is a company specializes in the technical art of 3D and 4D scanning, which is the foundation for creating the most unbelievably realistic digital humans imaginable. Ecco is skyrocketing at the moment and through this venture, Edsel recently worked with the likes of Paul McCartney, Snoop Dog, Terry Crews, Sylvester Stallone, while also working on titles such as “Spiderman”, “Terminator: Dark Fate”, “Love Death Robot”, as well as several volumes of the EA Madden franchise.

“Are These the Most Expensive?” : Jackie Chan Once Boasted His...