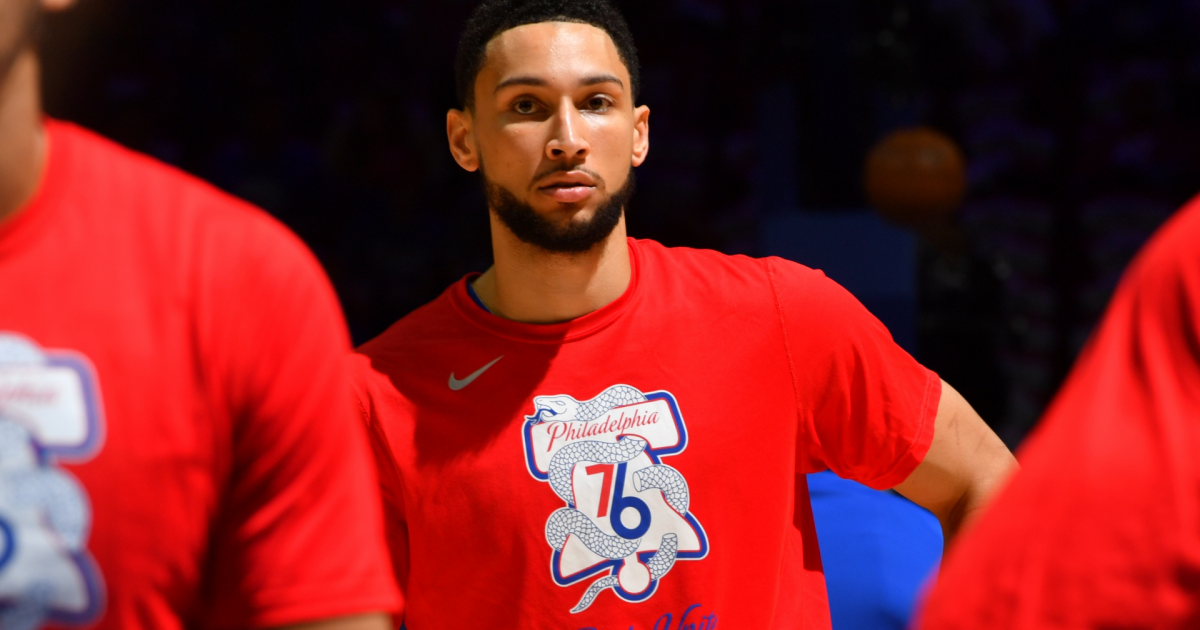 Tributes for returning players are a new trend, especially for the NBA. The earliest documentation of this honor is one from 2001, when the New York Knicks welcomed back Hall of Fame center Patrick Ewing as he returned as a member of the Seattle Supersonics.

Now, the “NBA Tribute Video” has become a modern tradition as a way for teams to honor fan favorites who have departed. It’s akin to sending a “Goodbye E-mail” to fellow workers after one leaves a company. The NBA has seen a boom in player movement over the past decade and more players are switching teams than ever before. Does this mean every single player who returns deserves a standing ovation and video treatment?

The simple answer is no.

#Nuggets just showed the R.J. Hampton tribute video. There weren’t too many highlights to include, but still a nice gesture. Probably half as long as Gary’s.

Even NBA players agree these tributes are bit much, just ask Magic center Robin Lopez who admitted, “I’ve had way too many tribute videos.” Lopez is on his eighth team in 14 seasons. There are certain accomplishments one must attain before being crowned worthy of having a full three-minute timeout dedicated to them.

The topic is now front and center as Ben Simmons will be making his return to Philadelphia as a member of the Brooklyn Nets on Thursday. Sixers coach Doc Rivers was recently asked about a potential Simmons tribute during the game and believes the former All-Star deserves one. Rivers went on to say “Ben did a lot of good things here, you know? It didn’t end well, right? Just like marriages and all kinds of other things [that] don’t end well.”

Rivers might be understating the departure. While he may think the marriage did not “end well,” objectively it appears the team and Simmons had a nasty divorce as the Australian native failed to suit up for a single game for the team since the end of last year’s playoff run.

Nonetheless, other players in precarious positions have received the video honor despite poor exits from a team. That doesn’t mean every player has received one, but a review of tribute videos from the past decade provides some clarity on what the hurdle is for a player to earn a tribute video. As can be seen in greater detail below, that hurdle is low.

LeBron James has had one of the most remarkable careers in professional sports. Period. It was obvious he was special after his first few years in Cleveland. When he “took his talents to South Beach” in 2010, it was heartbreaking for the Cavaliers and their fans. When the former Rookie of the Year returned for his first regular season matchup against his former squad, it led to one of the tensest NBA Regular Season games in league history.

December 2, 2010: LeBron (@KingJames) returns to play in Cleveland w/ Miami or the first time since his July “Decision.”

Fast-forward a few seasons, LeBron returned to Cleveland, won the first NBA title for the franchise and carried the team to four straight NBA Finals. When he returned as a member of the Los Angeles Lakers, it was nothing short of a red carpet for the King.

Here’s what it sounded like in the arena as the Cavs ran that tribute video for LeBron. pic.twitter.com/fKCFvdEc5M

The LeBron James case study established that if you win, you deserve a video. It also established the factors that appear to help a team decide if a player deserves a tribute video: success, longevity and departure.

LeBron’s former teammate, Kyrie Irving, also had a “cavalier” attitude (pun intended) as he left the team for “greener” pastures to join the Boston Celtics. Kyrie did not technically leave the team, rather he was traded. Nonetheless, reports have concluded that Irving demanded a trade and left the team with little choice.

The Cavs appeared to have discussions about honoring Kyrie when he returned as a member of the Celtics, but according to a source, the Cavs scrapped the idea because certain players were “upset” that he would be honored.

The former Duke standout ended up leaving Boston for the Nets. It was when he returned with his new team, that the Cavs played the video tribute.

It appears essentially hitting the game-winning shot in Game 7 of the NBA Finals warranted some recognition.

Kevin Durant was a homegrown star for the Oklahoma City Thunder and there wasn’t a dry eye in the room when he gave his 2014 MVP Speech. When he left for Golden State, it took the league by surprise. It was so jarring that when he was scheduled to return, the Thunder announced a “team policy” that they do not do tribute videos for former players.

The Thunder will acknowledge the return of Serge Ibaka to OKC. As team policy, the Thunder don’t show tribute videos 4 returning ex-players.

A very interesting “team policy,” especially to those of you who read the rest of this article to see how the team treated former star guard Russell Westbrook.

The former Texas Longhorn went on to win two NBA Championships for Golden State before jetting off to Brooklyn. Durant’s departure from Golden State was foreseeable and there was not as much drama. In turn, the Warriors honored Durant with a tribute video when he returned to the Bay Area.

Conclusion for Prong No. 1: Championship success > Anything else.

Butler was part of the “Baby Bulls” that brought the franchise back to the national conversation for the first time since the great Michael Jordan laced up his sneakers. “Jimmy G. Buckets” played his first six seasons for the Bulls, many of those years guarding LeBron one-on-one in intense battles during the Eastern Conference playoffs.

Butler was traded as part of a package that brought Chicago its current centerpiece, Zach LaVine. Despite not winning significant games in the playoffs, Butler was given a tribute along with Taj Gibson when they returned as members of the Minnesota Timberwolves.

Carmelo Anthony was drafted by the Denver Nuggets but many will likely remember him best for his time as a Knick. Anthony took the Knicks to three straight playoff appearances, something that had not been done since the 1990s. New York expects to be in the thick of things and Anthony did just that.

While the team failed to bring the Larry O’Brien trophy back to the Mecca of Basketball, there was an electricity from the day Carmelo arrived and fans will likely admit he was not appreciated enough during his tenure in NY. Melo rightfully was honored when he returned to New York as a member of the Thunder.

Westbrook was an eight-time All-Star for OKC, a former MVP and a core part of a team that challenged LeBron in the 2012 NBA Finals. He averaged a triple-double for three straight seasons and stood by his team as Durant, James Harden and Serge Ibaka left. When Westbrook returned to OKC, it felt like he was home. A video to honor him seemed natural.

Conclusion for Prong No. 2: If you can’t win, at least be nice on your way out.

Similar to LeBron’s first departure from Cleveland, Carter was not welcomed back as a visitor when he returned to Toronto after leaving the team for the then-New Jersey Nets. In 2004, Carter and the Raptors did not see eye-to-eye and he was dealt to the Nets. Carter was booed and jeered, and treated like a pure traitor. It didn’t help that “Air Canada” was going to back-to-back NBA Finals with his new team and defeating the Raptors in heartbreaking fashion along the way. Carter left under bad conditions and never led the team to NBA’s promiseland, or anywhere close.

It seemed as though Carter would never hear any praise north of the American border in Canada. Then in 2014, it was as if Christmas came early. The hearts of Raptors fans grew three sizes that day. Vinsanity was finally recognized on the big screen.

VIDEO: The Toronto Raptors played a tribute to Vince Carter that brought him to tears http://t.co/lSsyJrwfXU pic.twitter.com/VUTqZLLxaT

The former Dunk Champion was past his prime at that point, but the tears speak volumes. Toronto took a different approach when DeMar DeRozan returned as a Spur, however, it was under different circumstances as the front office chose to move him without much input.

As for Carter, he was one of the highest flyers in the game and even though he was not initially appreciated, his tribute was better late than never.

Harden came over to Houston after three seasons of coming off the bench for the Thunder. No one knew what to expect from the former Sixth Man of the Year. He then brought the Rockets within one game of the NBA Finals. After it became clear Houston could not overtake Golden State in the West, Harden wanted out. Harden stayed available for games but it was clear he had little interest in participating. His energy and appearance simply lacked. However, as we’ve seen, NBA teams are very liberal about giving tributes.

Harden did not get one tribute video, he got two!

One for when he returned immediately after being traded:

What an amazing 8 years.

And then a second one later in the year when more fans were allowed in the arena:

H-Town welcomed James Harden back with this tribute video 🤘

Harden was great, but was he SO great that he deserved two tributes? Apparently so.

If you’ve read this far, you probably think everyone gets a tribute video. You’d be largely right. Expect, we found one guy who did not!

Per source: The Pelicans will NOT have a tribute video for Anthony Davis tonight.

Davis led the Pelicans to a couple of playoff appearances and generally lived up to expectations. However, he seemed to give up his last season with the team and refused to give serious attention to staying in the Big Easy long-term, even when they received the number one pick in the 2019 NBA Draft. New Orleans did not reward Davis with any tribute, and we finally found someone that didn’t get a participation trophy NBA Tribute Video!

Conclusion for Prong No. 3: If you’re going to leave a bad taste, you better have a lot to show for it (or play long enough to make people forget they don’t like you).

Now we come back to Ben Simmons and his return to Philadelphia.  Early reports are that he won’t even play when the Nets face off against the 76ers.  Twitter has seen satirical tribute videos made for Carmelo Anthony’s time as a Chicago Bull (he was waived immediately after he was acquired) and the Hawks made one for the short time Dwight Howard played for the organization (one season, 80 games).

Regardless of what the 76ers do for in-game entertainment, the fans in attendance will find a way to be heard.  Even if they don’t get a chance to tell Simmons how they feel this time around, future matchups will surely have some fireworks. Philly fans have a way of letting you know how they really feel, so we shouldn’t put it past them to do something creative down the road, even going as far as to mock the situation.

Carla Bruni Is Back To Reclaim Her Title As Queen Of...