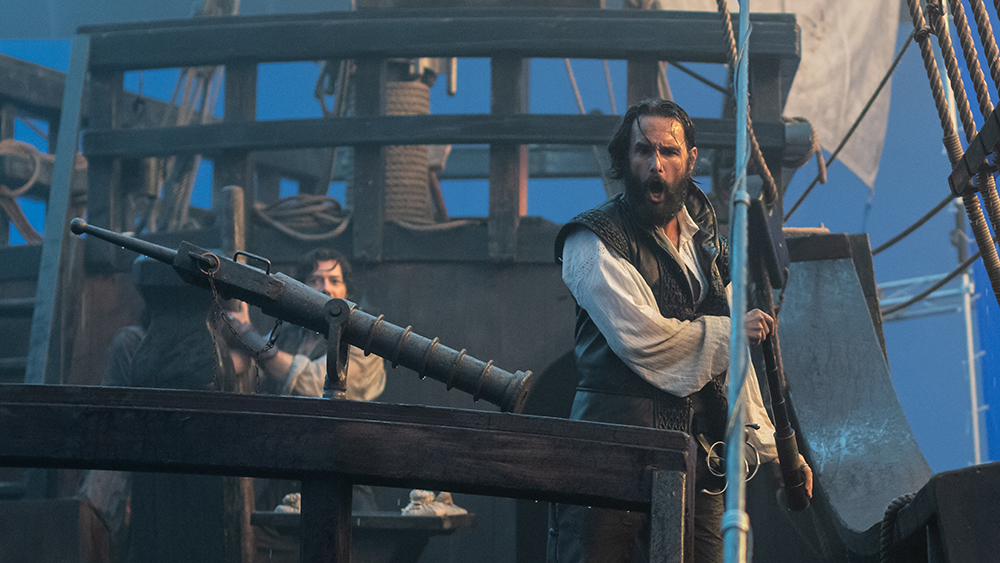 Rodrigo Santoro – Hector in “Westworld,” Xerxes in “300”– leans forward in his chair during a Zoom interview almost touching the screen, such is his excitement. “It’s absolutely extraordinary, the accomplishment. What they did, what this man did. The mission seemed completely impossible.”

West calls the series his “passion project.” For anybody interested in the Age of Discovery, Magellan’s circumnavigation of the world, completed by Basque Juan Sebastián Elcano, is the voyage of voyages, the greatest feat in maritime history, writes historian Laurence Bergreen.

“Boundless” (“Sin limites”) is first and foremost, West insists, entertainment, here epic unflagging, historic adventure for the whole family. Rejected by Portugal’s Manuel 1, Magellan sets sail from Seville in 1519 in the service of the Spanish crown to discover a short route around South America to the Spice Islands, Indonesia’s Moluccas, which would allow Spain to wrestle the spice trade from Portugal.

Crises break thick-and-fast: There’s a spy on board, sabotaging the expedition; the Portuguese fleet attacks; doldrums, disease threaten the crew; one ship, the Santiago is lost in a storm; a mutiny is brewing, led by the expedition’s Spanish captains. That’s just Episode 2.

Such epic constant danger serves the series’ higher purpose: To underscore the sheer scale of achievement of Magellan and that of Juan Sebastián Elcano, who completed the final stages of the expedition.

In 1492, Christopher Colombus reached the Caribbean through waters already trawled by Europe’s fishermen. Venturing beyond the Cape of Santa María, Magellan charted un-sailed waters. “We’ve reached the end of the world,” says the expedition’s chronicler, Antonio Pigafetta, when they reach the Cape.

Colombus discovered a New World, but took years to acknowledge what he found. Taking over from Magellan, Elcano’s circumnavigation of the world revealed immediately and for the first time ever the earth’s true scale. The Magellan-Elcano expedition navigated almost 90,000 kilometres, a distance nearly 15 times that of Columbus on his first journey, “Boundless” notes.

Carefully crafted, “Boundless” combines thudding action – a sailor falling from the mainmast to hit the deck just by the camera in Ep. 1 –  with a remarkable patina of tones from full bright colour when Magellan beaches in Brazil to slate grey reaching the bottom of Patagonia.

“Boundless” is produced by Miguel Menéndez de Zubillaga (“Loving Pablo”) in co-production with Leo Pearlman and Heather Greenwood at London’s Fullwell 73 (“One Direction 3D: This is Us,” “Bros: After the Screaming Stops”). It is co-produced by Patrick Fischer and Richard Kondal.

Makings its debut on Amazon’s Prime Video on June 10 in Spain and Latin America, and then in the U.K., the U.S., France and Germany over the summer, the seafaring epic bowed No. 1 on Amazon in Germany and No. 2 in Brazil, just behind “The Boys,” Season 3. It is backed by Spanish public broadcaster RTVE which co-handles global distribution rights with ZDF Studios outside Prime Video territories.

Santoro, West and Menéndez de Zubillaga talked to Variety about “Boundless” in the run-up to its Mipcom bow.

How did “Boundless” come about?

Menéndez de Zubillaga: I have a house in [Basque Coast] village Zarautz and vacation there. Elcano’s birthplace, Getaria, where he has a statue, is right nearby. I couldn’t understand why nobody had made a fiction about Magellan and Elcano. I’ve explored the idea from 2003, talked to directors over a decade until I realized that the story is enthralling, but better told in an entertainment format, which is when I thought of Simon.

West: I’m a huge fan of any film on ships in any period. I’m actually a descendant of Captain Bligh of the Bounty. I’ve always been absolutely fascinated by that world and its history.

Santoro: Two months before the pandemic, I was shooting Netflix film “Seven Prisoners” in Brazil when my agent contacted me: “I’ve read something that is really interesting. A complex, strong leading man, and it’s a big production and from Spain.” Then I read the first script version and thought “Wow!”

See also  “Can’t Vote for a Republican”: Arnold Schwarzenegger’s Ex-wife Maria Shriver Once Opened Up about the Political Resentment Their Marriage Provoked

The series feels like you went for a balance between absolute authenticity when possible and broad audience appeal.

Menéndez de Zubillaga: Exactly. That was our absolute obsession. Rigor in costumes, props, character interpretation, history, but telling a passionate though real story where you empathise and fall in love with characters who are opposites: Magellan, persevering, brilliant, and always right, or so he thinks;  and Elcano, an outsider, a great seafarer, living without hierarchies, though he’s forced to evolve.

West: What was slightly unusual about the expedition was that it had a very distinct Spanish/Portuguese line down the middle with five Spanish captains, all very distrustful of Magellan, who was from Portugal. The tension was hugely intense. This was a very turbulent and violent expedition, with murder, rape, betrayal, sabotage, mutiny, executions. I really had to pick and choose the highlights, so to speak. This great drama, however, was why it makes for such a great series.

Your performance, Rodrigo, is often highly contained. Magellan, as pictured in the series, can also be ruthless, hanging, decapitating, shooting and marooning expedition members to ensure his expedition’s success….

Santoro: For the first year and half of the pandemic, I was locked up in my house with my wife, my kid and Magellan, discovering just how much of a complex, conflicted character he was. All the descriptions I read picture him as hard and tough – the most obvious characteristics – and obsessed and a visionary.

But what really drove Magellan?

Santoro: Magellan lost his parents. He was sent to the Portuguese court where he grew up, working as a page among nobility, but never one of them. He fought for the Portuguese crown for eight years in India, helped conquer Malacca, was wounded in Morocco. But he never felt recognised by his King. When he finds a map and take it to Manuel 1, the King doesn’t even want to see him. That’s the scene with which we start “Boundless.” I think he was a man who needed to prove his true worth to his “father,” the King, to his country and to himself.

One crucial creative decision was to shoot in Spanish and other languages….

West: It’s a drama set all around the world. The standard Hollywood way would be: Everyone speaks English but with a slightly odd accent, depending on where they come from. But Magellan was Portuguese and went to Spain. His family had Spanish members. His crew was made up of all sorts of Europeans and even further-afield nationalities. I decided I could add authenticity by shooting everything in the languages the characters really spoke.

You also achieve authenticity in your lighting set ups….

West: Almost all the interiors were lit with real tallow candles. We had special very fast lenses on the cameras so that you would feel in a real place at that time. It would have been dark and gloomy after the sun went down and more mysterious and more interesting to me. DoP Shelley Johnson did a huge amount of research. We had a programmable lighting rig that could be instantly changed to where we were supposed to be and what time of day.

What were the keys to getting the series made?

Menéndez de Zubillaga: First, Simon. His presence showed that we really intended to make the series. Then [Spain’s] Amazon Prime: Ricardo Cabonero loved the project. Then the 500th Anniversary program which created a timeline and RTVE, which boarded in 2019, given the 500th Anniversary’s decision to support just one big film/TV project and the fact that Andalucia’s Canal Sur and the Basque country’s EiTB were already on board.

This is one of the biggest series ever from Spain?

Menéndez de Zubillaga: The budget is $25 million. It’s the biggest  independent production in the history of Spain, deficit financed via banks which discounted contracts from Amazon, EiTB, everyone.

Menéndez de Zubillaga: Free TV worldwide, after a holdback in Amazon territories – which are Spain, Portugal, France, Italy, U.K., U.S., Latin America and Germany – and all rights outside them. such as in North and Eastern Europe and Asia.