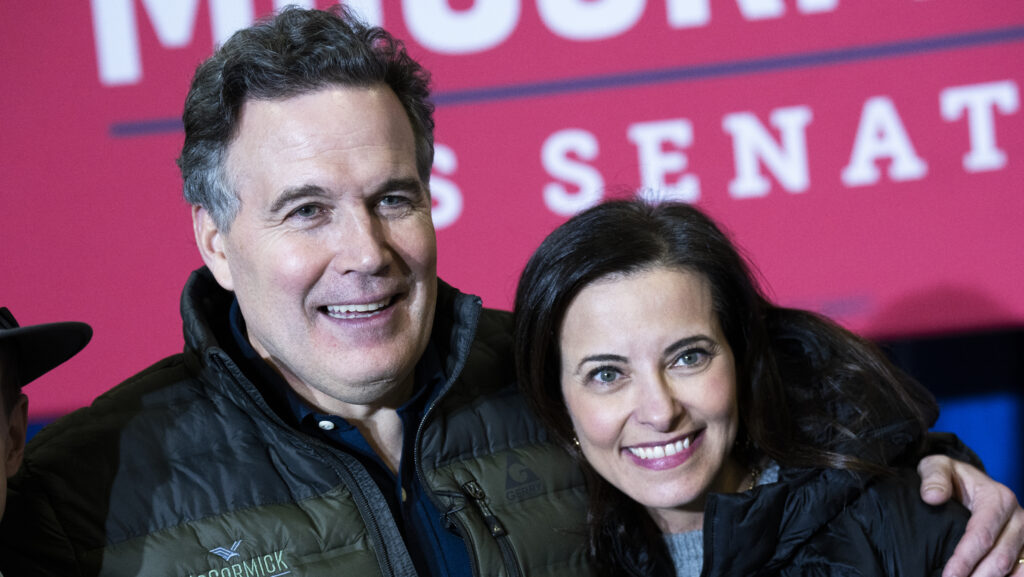 There are two and a half weeks left in the Pennsylvania Senate G.O.P. primary race, which features two non-native Pennsylvanian frontrunners with outsized statures and .001 percent status, mugging for the hearts and minds of the Rust Belt Trump voter. But the most uncomfortable part of the messy electoral gauntlet that Mehmet Oz and David “Dave” McCormick have to navigate is the whole 2020 election thing: was it stolen, as Donald Trump claims? Presumably, as well-educated coastal elites who formerly ran successful businesses and interfaced frequently with polite society, both Oz and Dave know that all credible accusations of election fraud are foolhardy. But as two ambition machines misdirected toward a legacy-burnishing political conquest, both also know that Republicans’ handling of this perilous question is the most important detail in a political portfolio nowadays.

Judging by Monday’s debate, which saw the two men face off against three other candidates, McCormick’s position on the stolen election question is well, maybe, and we need to investigate further. It’s a posture, it seems, that represents McCormick’s discomfort surrounding his current political-human-dignity pickle. Only a few months ago, to wit, he was the universally renowned and beloved C.E.O. of Bridgewater, a veteran, a former government official and polymath. Then he decided to move back to Pittsburgh, leaned into the contacts of his wife, Dina Powell, and hired dozens of former Trump comms drones, like Hope Hicks, to create a Breitbart-friendly narrative that he was, as Breitbart itself wrote, “Full MAGA.” If Monday’s waffling was any indication, McCormick isn’t ready to fully go there. And maybe that’s partly why Trump endorsed Oz despite McCormick’s multiple entreaties. He might have smelled a Mitt Romney.

Either way, on Monday, Oz had zero compunction about anything. He enthusiastically called 2020 a sham, insisted it needed to be litigated and declared that Biden needed the old heave-ho. “I have discussed it with President Trump and we cannot move on,” he declared. No surprise there—Trump has made it abundantly clear that his endorsements hinge on imbibing his reality—but it’s a demonic bargain for would-be moderates looking for some MAGA magic to put them over the edge. While a recent Politico/Morning Consult poll found that only 37 percent of Republicans want to continue to focus on 2020, 53 percent said they would support Trump continuing to make the case that he was robbed of a second term.

Of course, there’s a reason this wild debate is playing out in Pennsylvania. Of the states that flipped narrowly from red to blue in 2020, in part due to a surge in mail-in voting, Pennsylvania has come under the most suspicion from the far right. It’s also true that the Associated Press discovered 26 fraudulent Biden ballots in the state, miniscule in scheme of Biden’s 80,555 vote margin, but enough to take it out of the realm of full-blown Hugo Chavez-hacked-the-voting-machines territory–and present it as a semi-tangible issue for Republican voters. In fact, it gave the state G.O.P. enough momentum to challenge the state’s mail-in ballot law, which was established in 2019. A district court overturned the law as unconstitutional in January 2022, and the state’s Democrats (in addition to a fair number of G.O.P. county chairs) plan to appeal the ruling to the state Supreme Court.

Regardless, any Republican running for Pennsylvania office these days must have a strong answer to the “ballot fraud” question, unlike, say, Glenn Youngkin, who largely dodged the controversy in Virginia. So it’s interesting to see two leading candidates stake out notably different positions on a MAGA litmus test. With about 18 days left in the election, I’m told, their respective answers may prove decisive in determining who wins the state. Yes, Oz’s position aligns with Trump’s, and he also has the former president’s endorsement, and he still has the most name recognition, but he also risks falling face-first into the election truther loony bin alongside Mike Lindell and Rudy Giuliani. McCormick, on the other hand, might win over a larger coalition of merely election-skeptical Republicans, but at the expense of an opportunity to boost his name recognition on Fox, or to get himself written up glowingly in Newsmax, as Oz did. (One of these positions, at least, won’t be very popular in East Hampton this summer.)

Of course, the Oz-“Dave” grudge match is also notable for the smoke signals it will inevitably generate for Republican candidates nationwide. Flip the microscope around, and it’s hard not to see Pennsylvania as an ideal proving ground for the broader debate over the future of G.O.P. politics in a post-Trump era. Populism and nationalism both have their appeal, as evidenced by the speed with which two centimillionaire elites from Connecticut and New Jersey traded their cufflinks for hunting jackets. The outcome of this race will likely be a harbinger of whether embracing the rigged election narrative helps, or hurts, ambitious Republican candidates, particularly in swing states. At the very least, it will confirm or belie Jeff Roe’s thesis that the Youngkins and McCormicks of the world can run, and win, without fully genuflecting to Trump.

The MAGA loyalty test in the post-January 6th G.O.P. goes a little something like this: It is perfectly fine to have doubted Trump in 2016, as long as you backed his agenda while in office. It’s likewise acceptable to have freaked out about Trump’s role in stoking the Capitol riot, as long as you eventually calmed down, reconsidered, peeled the scales off your eyes, and then publicly absolved Trump. But you can never, ever say that he deserved to be kicked off Twitter, which remains the most grievous insult that The Liberal Elite ever dealt to his power and influence. And you can certainly never say that his ideological allies deserved to be deplatformed, too.

Unfortunately, Kevin McCarthy committed the latter sin in the leaked audio published by Jonathan Martin and Alex Burns last week as they teased their forthcoming book, This Will Not Pass, wherein McCarthy can be heard telling fellow G.O.P. leaders that there were indeed certain party members whose social media posts, he feared, were stoking violence: “Can’t they take away their Twitter accounts, too?” (This, ironically, was more damaging to his reputation inside the base than McCarthy telling said leaders that he would ask Trump to resign.)

Not that this is going to harm his prospects for Speaker should the G.O.P. win back the House in the midterms: if you hated McCarthy prior to the press tour for This Shall Not Pass, you’ll probably continue to hate him after this, and the audio of him making these utterances will only crystallize the perception that he’s an establishment stooge. That has been the default position of the Marjorie Taylor Greene/Matt Gaetz alliance, along with their small handful of allies, who claim that they represent the true voice of the American people. (The two of them exited a recent G.O.P. conference meeting chastised but still salty, while McCarthy received a standing ovation.)

But as I’ve reported before, the sentiment within this camp is that while their observations might be correct, there’s little chance that they would find allies inside the Congress. And even though McCarthy’s taped statements might echo the position of Big Tech, he’s subsequently positioned himself as someone who’s dutifully going through the Trump reeducation camp—visiting the president at Mar-a-Lago, pushing back against the January 6th Commission, exiling his former ally Liz Cheney to the #resistance gulag—which, for now, would save his hide. The only thing that would actually damage McCarthy’s political future would be something along the lines of, say, him actually possessing Hunter Biden’s laptop and hiding it from the press for four years.

On Tuesday night, as the wider world collapsed onto the digital fainting couch over Elon Musk’s takeover of Twitter, my phone started blowing up with texts from the digital MAGA influencers I’ve known for years, all guffawing over the ballooning of the far right’s overnight, staggering growth. Donald Trump Jr., I was told, gained nearly 87,000 followers in 24 hours. Ben Shapiro gained 125,000. Benny Johnson gained 30,000. Intrigued, I hopped on Twitter (far past my normal Twitter bedtime) and was hit with a flurry of insane statistics: Tucker Carlson had added 62,000 followers; Ron DeSantis collected 96,500 more, and on and on it went. In a mind-boggling twist, Democrats and left-wing Twitter personalities appeared to be losing followers by the tens of thousands.

What was happening? Theories and information abounded over the next few hours. Left-wing followers, Ben Collins from NBC News reported, seemed to be self-deporting from the platform in protest of Musk taking over. A horde of bots, according to the founder of BotSentinel, seemed to be boosting right-wing celebrities’ followers counts, too. (96,410 of DeSantis’s new followers were accounts created the day before.) But the not-so-secret hope of the right-wing internet was that these were not new accounts, but perhaps represented people who’d been banned from the platform previously for violating any number of Twitter policies—promoting Covid misinformation, debunked political stories, hate speech, election conspiracy mongering, et cetera—and were now rising from the social media grave.

Logically, none of this would have been Musk’s doing: the man may have filed the paperwork to buy Twitter (while posting haphazard suggestions for how he’d moderate the platform) but the deal is months and months away from completion. Indeed, as my Puck partner Bill Cohan points out, it could still fall through. But the absolute mania surrounding this apparent re-platforming phenomenon was revealing nonetheless. After all, ever since Musk announced his interest in Twitter—first as a major shareholder, then as the pending owner of the entire goshdarn thing—the entirety of the right has treated the Tesla C.E.O. as some sort of movement savior, to a degree that eclipsed even the cultish devotion to Trump. (Carlson went out of his way to praise Musk for bringing him back on Twitter, as did Charlie Kirk, even as Twitter’s still-very-much-in-control pre-Elon management team was asserting that Musk had nothing to do with it. On the contrary, the company said, both accounts were reactivated after Carlson and Kirk elected to remove the tweets that got them banned in the first place.)

Add to that his already controversial Twitter activity, and you understand the polarizing nature of Musk: while the left views him as a Horseman of the Apocalypse tearing open the Seventh Seal, the right sees him as techno-free speech Jesus. “The right wants less moderation and the left wants more, [so] everyone is seeing Musk through a wholly partisan lens because he’s spoken about wanting less moderation,” noted Shoshanna Weissman, an expert at the Federalist Society’s Regulatory Transparency Project who focuses on social media regulation.

Which made us both curious as to what would happen should Musk fail to meet the right’s utopian expectations. After all, he’s publicly claimed that he wants to enrage the far right as much as he would the far left, and his pronouncements are vague enough for everyone to project their own wishes onto him. (Musk’s recent tweet, sharing a cartoon depiction of stick figures on an ideological spectrum, sent conservative Twitter into a Talmudic analytical spiral.) Weismann suspected that as soon as Musk grows into his role—not as a commentator, but as the owner—he will be bound to piss them off. “[They] are going to have to grapple with him agreeing with them sometimes and not other times.” Let the kicking and screaming commence.