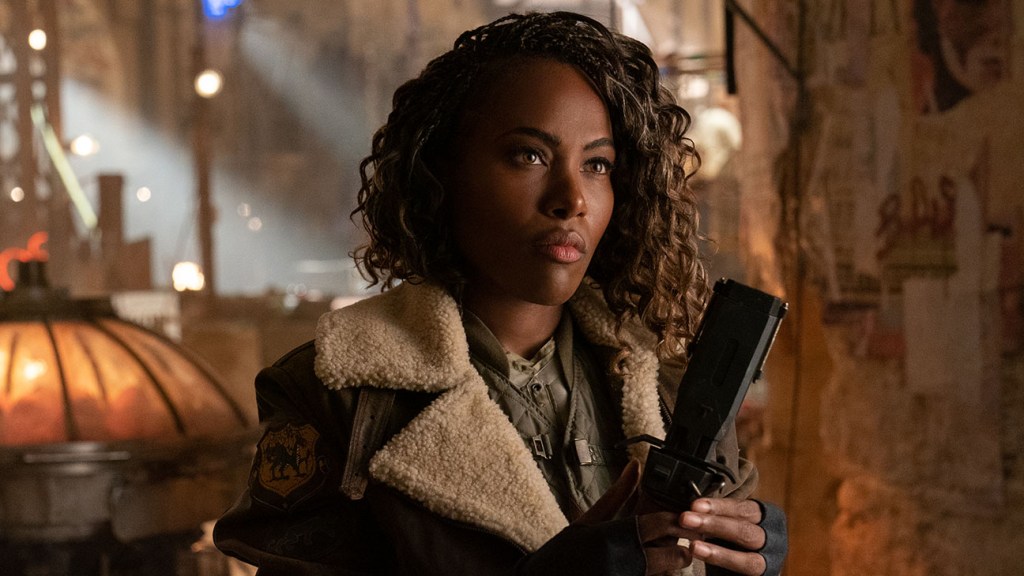 On June 10, Jurassic World Dominion, the final film in the Jurassic World trilogy, opened in theaters nationwide. In a recent piece for The Hollywood Reporter, writer Richard Newby called the movie “a clear testament to the strengths and weaknesses of the blockbuster film business.” This installment in the franchise sees DeWanda Wise (airplane pilot Kayla Watts) emerge as an essential and unlikely hero whose deftness in the cockpit reroutes the film’s unfolding.

Recently, Wise has stepped into the universe of a classic American Western in Jeymes Samuel’s The Harder They Fall, a comedy in director Stella Meghie’s The Weekend and the reimagined Brooklyn of the series update for Spike Lee’s cult classic She’s Gotta Have It on Netflix. Each genre has its own demands and creative freedoms, and Wise’s approach to all of them is equal parts strategy and trust: “I’m very intuitive,” she says. Ahead of the Jurassic World Dominion premiere, Wise spoke with THR about how she prepared for her latest role and sought to leave her footprint on the decades-long franchise that uses dinosaurs and current events to collapse time.

How did you prepare to join a franchise that’s not only successful but established in the minds of audiences?

On one hand, I’m super step-by-step. So I try not to think of things in a way that would freeze me. I talked to [director Colin Trevorrow] from the very beginning about what it takes to construct a character who makes an impact. And when I got the script, I just started essentially preparing for the given circumstances of the actual thing. As it pertains to the larger franchise of it all, it’s a very warm franchise, there’s a very loving fan base. It’s also one where, you know, the stars are the dinosaurs. So it takes the pressure off.

What is it like stepping into this action, adventure-oriented genre, given some of your previous roles? You’ve occupied very different worlds. How did you build the character, Kayla Watts, out?

I saw [the 2017 film] Logan and I recognized that there was room in the action space for characters who had a little more depth of personhood, of lives, of personality — even if it doesn’t necessarily show up in the exposition on screen, you can still feel the difference. I wouldn’t say that I saw myself in the action space until that movie kind of sparked something in me. But I had my sights on wanting to get into the action space for like 10 years.

As a pilot, it felt like the plot really hinged on Kayla’s support. Especially as a Black woman in the movie, how were you thinking about the legacy of the Tuskegee Airmen, for example, and about the history that might impact her?

Part of what I built out in Kayla was this notion of coming from a matriarchal line of women who served in the military — and then just thinking historically about when women were actually allowed to fly fighter jets in the military. I mean, that’s like early ’90s, very recent history. [Note: Congress removed the legal ban on women in combat aircraft by passing Public Law 102-190 in December 1991.] So that component of who she is, it lives not only in [the space] when you’re seeing her in action, it’s in everything about her — if you’re serving, it changes the way you carry yourself, the way you live your life. In my imagination, she lives on that plane. She’s a woman who can get up and go at any moment. That’s why she has the braids. (Laughs.)

In terms of the dialogue, it felt like we didn’t get that much of Kayla’s backstory to me, or learn that much about her outside life. But she still felt like a full character to me.

That’s because you’re introduced to her in her world. Right when you first meet her, by the time you’re in the cockpit, you have this notion of Owen (Chris Pratt) and Claire (Bryce Dallas Howard) being a little disoriented because that’s not their territory anymore. And throughout the duration of the film, she’s been to Biosyn, she’s the one who’s showing them the way. So much of the action hinges not just on, “I need to get these people out because I’m the only one who can fly, I’m the only one who’s driving.” It’s also the fact that you really get the sense that once you enter into her world, you’re in her world.

I was struck by the tension between past and future in the film. Are there any themes that stuck out to you in the process of filming? Any that feel particularly urgent, or relevant, in retrospect?

Just naturally, the core of her arc is a very classical hero’s call. Oftentimes, when you’re in this space — when you’re in the action space — the hero just is. And this is one of the first times in this franchise that you meet a hero who is called to arms.

Something that really moved me deeply with Kayla was this notion of the imperfect hero, of being able to essentially start and serve from where you are, and a homecoming…because in my mind, after this, she’s going home to Detroit. And she’s coming home to the fullness of her integrity.

Ruben Randall - April 9, 2022 0
Money
What Is Arian Moayed's Net Worth and Salary?Arian Moayed is an Iranian-born American actor, director, producer, and writer who has a net worth of...