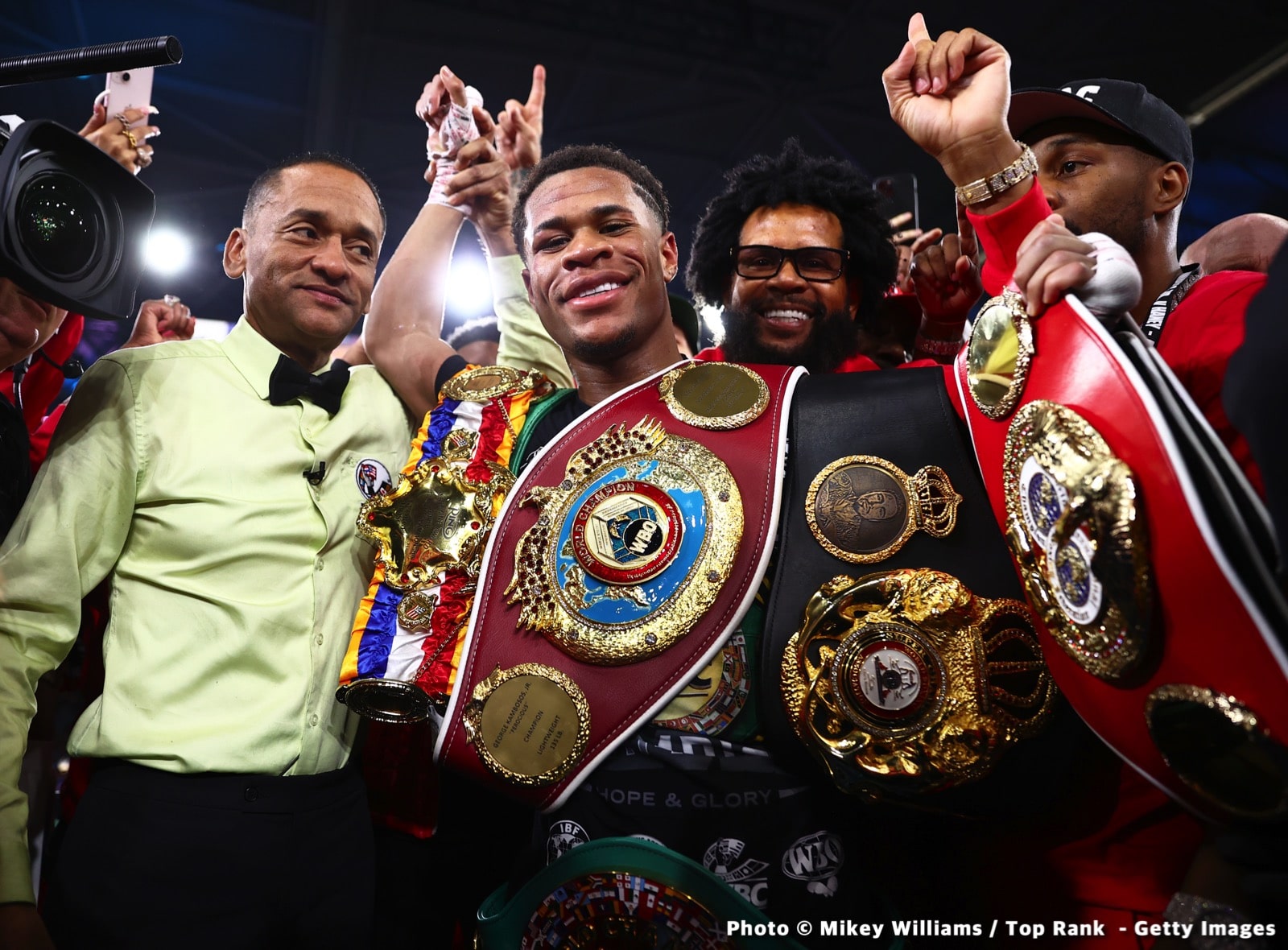 Trainer Andre Rozier believes undisputed lightweight champion Devin Haney would have a good shot at defeating Gervonta ‘Tank’ Davis and Vasyl Lomachenko if he fought a technically smart fight against both.

Tank Davis (27-0, 25 KOs) has the type of power that could give Haney problems if he lands something clean, and he will at some point. While Haney does look similar to Floyd Mayweather Jr. with his style, defensively, he’s nowhere near that level.

Even Mayweather when he was in his last 30s was a better defensive fighter than the 23-year-old Haney is now.

Tank Davis could figure into Haney’s future in 2023, but not this year unless Kambosos changes his mind about wanting an immediate rematch.

“Devin Haney did exactly what his corner wanted him to do. Yoel Judah was expressing to him, ‘Box, box,’ and that’s what he did. He boxed for 12 rounds,” said Andre Rozier to Fighthype discussing Devin Haney’s win over George Kambosos last Saturday.

“That would have to be a very, very strategic fight,” said Rozier about a match between Gervonta ‘Tank’ Davis and Devin Haney. “You have the articulate boxer [Haney] facing the extremely powerful Davis and his ability to render you unconscious.

“I think it’ll be a great fight, and I honestly can’t pick a winner on that one. I like power, so I’d have to lean towards Davis.

See also  Diaz: Goal Is To Beat Garcia, Then Haney To Get My Revenge; Then I Want Tank

The power that Tank Davis possesses will give Haney a nightmare because he’s going to get hit a lot by the popular WBA ‘regular’ lightweight champion.

If Jorge Linares and Joseph ‘Jojo’ Diaz Jr. were able to hurt Haney, Tank will undoubtedly do that as well.

Lomachenko will be tough for Devin

“He’s the undisputed world champion, he has to face everyone now,” said Rozier when asked how he sees Haney doing against Vasyl Lomachenko.

“You have every belt, so that’s your history and your pedigree now. You have to face all comers because you have all the straps. Saying that, it would be a really strategic bout.

“Lomachenko is a very kinetic and articulate fighter. He does a lot of things that other people can’t do, and Haney would have to be on his very best to meet this challenge.

“I would have to say that I would lean a little bit towards Haney because of the size, believe it or not. But if Loma is on fire, there’s going to be trouble in the house.

“It could or the rest might have helped him,” said Rozier when asked if the ring rust from six months out of the ring with negatively impact Lomachenko’s performance when he returns to action.

“He might have needed that rest and comes back 150%. So it’s a hard question but it’s a question that I would love to see answered,”  said Rozier.

“He made it look like easy work and that’s because he followed the instructions of his corner and utilized his true capabilities. Of course, the number one weapon in boxing is the jab, and that’s what won him the fight,” Rozier continued about Haney’s victory over an outwitted Kambosos.

“In my book, it makes no sense. I see the same scenario repeating itself. I don’t want to see that. I want to move on to the more exciting capabilities out there. The match-ups in the lightweight division are super-duper exciting.

“There are so many of them. Let’s move on to that because I don’t want to see Haney-Kambosos 2. He already took in full control, and I think it’ll be worse the next time around,” said Rozier.

Return to Hogwarts” to Premiere on Cartoon Network and TBS in...