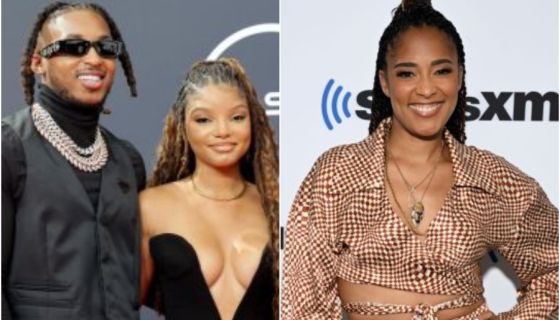 DDG and Bailey first sparked dating rumors in January 2022 and recently made headlines when the rapper defend Bailey’s casting as Ariel in the upcoming live-action The Little Mermaid movie.

As MADAMENOIRE shared with readers in the past, some viewers have subjected Bailey to racist online attacks for being a Black woman with locs in the film’s lead role.

“I didn’t know people was this racist. I didn’t know this… I thought this sh*t was gone already,” DDG told Bootleg Kev in a now-viral clip.

“I thought this sh*t was gone. I thought Martin Luther King canceled this sh*t out… This sh*t is crazy.”

Understandably, not everyone was here for DDG’s comments on racism in the U.S.

The rapper’s thoughts even spurred a reaction video from Seales, wherein the comedienne said Bailey, 22, should break up with DDG, 25.

“How old is she?” DDG asked Vlad TV’s Shirley Ju about Seales, 41. “Why would you even be speaking on a young relationship like that. The sh*t is like…”

“What the f*ck? At your big age?” the rapper said after learning how old Seales is. “That’s how you talkin’? About a 25-year-old and a 22-year-old dating?”

Explaining his comments on the country’s racism, DDG said, “I was saying it in a way of exaggeration. Like, d–n, n—-s still racist like this, what the f*ck? Crazy. Like just trying to spread light on the situation. It wasn’t joking about MLK obviously, I’m Black, like, what the f–k? Sh*t’s weird.”

Read more about DDG and Halle’s relationship below.

RELATED CONTENT: “Halle Bailey Gets Candid About Her Love For DDG”

Best Movies Of 2022, And The Biggest Flops – OutKick

Ruben Randall - April 5, 2022 0
Celebrity
A decade ago, the Portland Trail Blazers kickstarted a new era thanks to an Interim General Manager boldly trading veterans out...