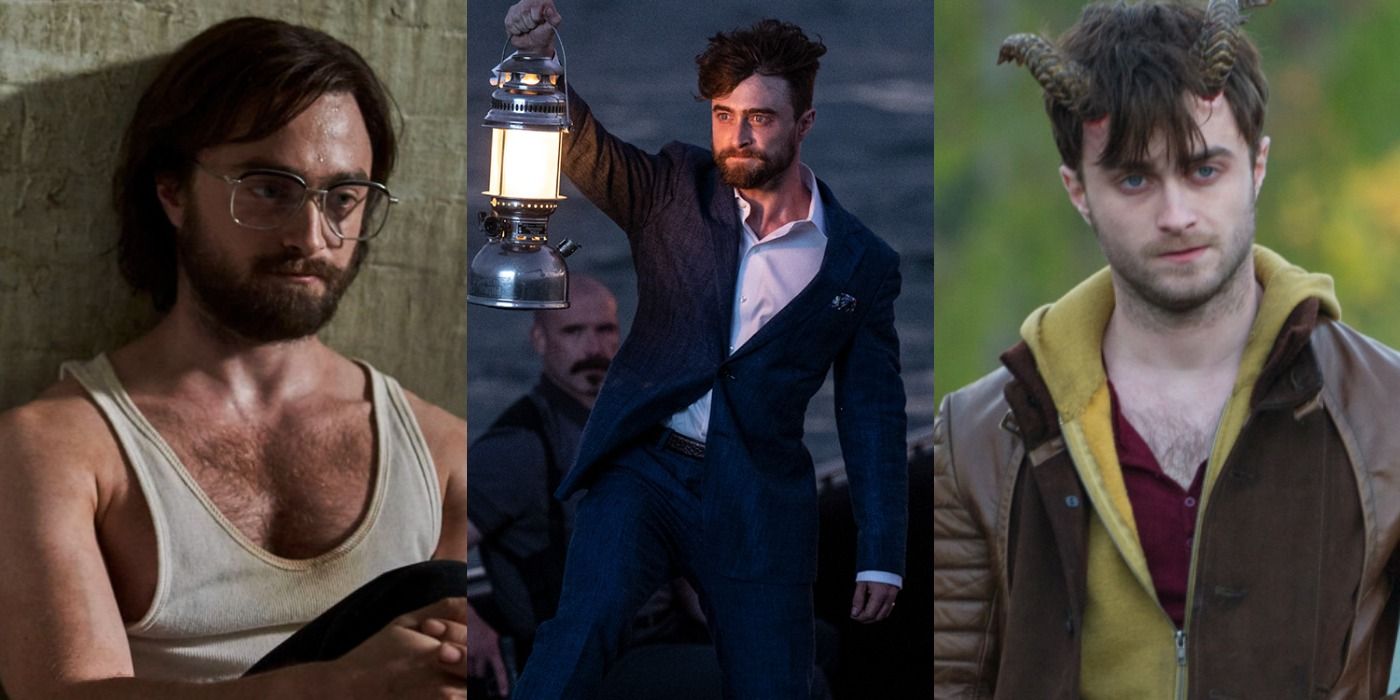 Daniel Radcliffe has returned to the mainstream big-budget film backdrop with The Lost City, which places him in the villainous role of Abigail Fairfax. Many consider such a part to be a unique choice from the actor because he’s still largely perceived as the all-loving protagonist of the Harry Potter series.

RELATED: The Lost City & 9 Other Sandra Bullock Action Movies, Ranked According To IMDb

Even more interesting is the fact that Radcliffe’s filmography contains roles that viewers will consider unconventional, as these characters and stories differ from the usual good versus bad outline. It’s fun to look back at the odd parts Radcliffe has racked up in his screen credits, which range from fantasy, horror, drama, and comedy.

Abigail Fairfax: The Lost City (2022) – Will Be Available To Stream On Paramount+

Daniel Radcliffe turned toward the classic chewing-the-scenery type of villain here, with Abigail Fairfax kidnapping Loretta (Sandra Bullock) to force her into revealing the location of a hidden treasure. Abigail brought quite a few memorable quotes in The Lost City and was a throwback to uncomplicated, pure evil antagonists.

Radcliffe is known for taking on characters with a greater depth and for performing as heroic individuals, both of which were subverted with Abigail. Here, his role was to bolster the sympathetic quality of the protagonists by heavily contrasting them as a bad guy with no redeeming qualities.

Although it’s among Daniel Radcliffe’s best-received movies, there’s no doubt that this is the most bizarre premise the actor has been part of. Swiss Army Man sees Radcliffe play a corpse named Manny who becomes sentient after Hank (Paul Dano) finds him ashore on a marooned island and discovers Manny has powers.

The plot never seeks to explain where Manny comes from or how he has powers in the first place, with Radcliffe portraying strange qualities of the character, mainly his rabid flatulence. It’s a surrealist comedy that’s meant to create speculation over giving answers and Radcliffe’s performance reflects just as much.

The action-comedy genre has gone through various evolutions, but Guns Akimbo certainly pushes all believability. Radcliffe plays Miles Lee Harris, an online troll who’s forced into a survival game of sorts where his hands are nailed to two guns as he has to survive somehow.

The main unconventional aspect of things comes from Radcliffe’s over-the-top portrayal of the protagonist, who routinely makes weird faces, screams around, and acts like a goof while shooting things down. It also sparked a number of memes due to how the actor was in a role nobody would have seen coming.

“Weird Al” Yankovic: Weird: The Al Yankovic Story (2023) – Will Be Available To Stream On The Roku Channel

There has been some buzz over Radcliffe’s casting in this biopic because he looks very different from the real person, with the actor playing “Weird Al” Yankovic. The singer is known for his kooky songs that largely parody other performers, with Radcliffe set to portray Yankovic’s younger years.

The differences in height, build, and voices of Radcliffe and Yankovic certainly make the former an interesting choice, although few will doubt his talent to pull it off. The unconventional aspect comes from Yankovic’s satirical nature and how different Radcliffe appears when in full costume as the titular singer.

Fans of Harry Potter joke about the idea of the titular character being incarcerated in Azkaban prison, but Escape from Pretoria placed Daniel Radcliffe in a similar setting. The actor played Tim Jenkin in a biographical film about Jenkin’s bid for freedom while in Pretoria Prison.

Viewers aren’t accustomed to seeing Radcliffe in such a stifling backdrop, as the prison is made to appear as unwelcoming as it’s supposed to be. He also looks unrecognizable and gaunt, with his performance also being restrained to convey the quiet Jenkin’s demeanor.

Although based on true events, Kill Your Darlings has an unorthodox plot because it can’t seem to decide between the genres of drama, biopic, or psychological thriller. Radcliffe appears as writer Allen Ginsberg, who falls in love with Lucien Carr (Dane DeHaan) and gets wrapped up in Carr’s issues with his university professor.

In retrospect, such a film appears to be par for the course for Daniel Radcliffe, but it was out of the left field for fans at the time since Kill Your Darlings doesn’t conform to the usual style of storytelling. Radcliffe’s character is rather eccentric and hard to place in terms of what he’s supposed to be thinking.

This unique take on the classic monster movie character caught many by surprise, mainly because of how different Daniel Radcliffe looked. Moreover, Victor Frankenstein’s plot is told through Igor rather than the titular character, which placed fans in a point of view they weren’t familiar with.

Radcliffe portrays Igor in a far more sympathetic light, as he assists Frankenstein (James McAvoy) in his strange experiments until the latter starts going too far. It was unexpected to see Radcliffe go from blockbuster fantasy hero to the role of horror movie sidekick, but the film still entertains in many ways.

Daniel Radcliffe hasn’t been in contention for the role of James Bond and it wasn’t something fans would have thought of for him until he played a similar character in Playmobil. The slapstick animated comedy has the actor voicing Rex Dasher, a suave but careless secret agent.

The movie is about Marla (Anya Taylor-Joy) as she tries to save her brother from the Playmobil world with the help of Rex Dasher. Those accustomed to Radcliffe’s serious characters might not know what to make of this one, while fans of Harry Potter will also be amused by the actor’s eccentric portrayal.

Horns was the first fantasy film after the Harry Potter series that Daniel Radcliffe starred in, and it’s safe to say the premise is quite the opposite. In the film, Radcliffe plays Ignatius Perrish, a young man framed for the murder of his girlfriend who mysteriously develops horns and supernatural powers to look for the real culprits.

See also  Bill Gates Cheated on Melinda Gates Before Divorce: Why They Broke Up

Making things stranger is the fact that Horns also serves as a comedic movie, which is hardly what viewers would expect from such a gruesome premise. Radcliffe’s most distinct aspect here is his use of an American accent that completely changes the perception fans have of him since he sounds like someone else entirely.

Miracle Workers is an anthology comedy series that places its characters in outlandish scenarios each season. Daniel Radcliffe has portrayed depressed angel Craig Bog, out-of-touch Dark ages Prince Chaunceley, and Reverend Zeke Brown who reluctantly teams up with an outlaw in the Old West.

Each one of Radcliffe’s characters subverts the usual protagonist role, as they turn out to have flaws that leave little to separate them from villains. The kooky backdrops of the seasons ensure that viewers don’t see what’s coming either from the story or from Radcliffe himself.

NEXT: 10 Things To Know About The Lost City


Saim Cheeda is an entertainment writer covering all of Film, TV, Gaming and Books. He’s been a writer for Valnet since 2017, contributing 500+ articles for The Gamer, The Things, Game Rant, Comic Book Resources and Screen Rant. Apart from freelance writing, Saim is a lifestyle blogger, co-owning the blog 3 States Apart.

World News | Inaugural ICET Dialogue Has Potential to Take India-US Relationship to Next...