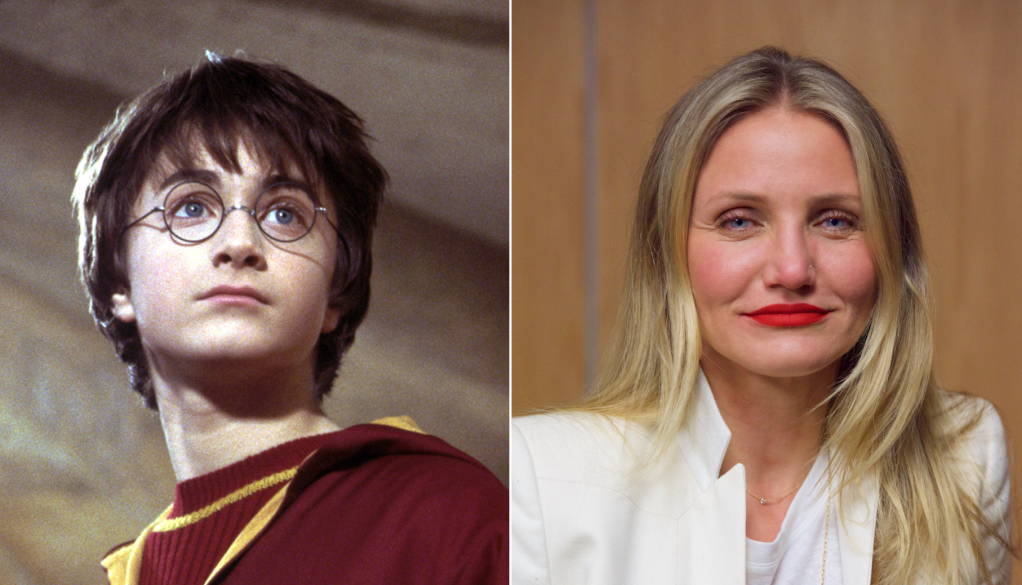 Tom Felton revealed in his just-released memoir, “Beyond the Wand: The Magic and Mayhem of Growing Up a Wizard,” that a young Daniel Radcliffe used a photo of Cameron Diaz to help him know where to look while filming the broomstick flying sequences in “Harry Potter” (via Insider). It appears Radcliffe has long been outspoken about his Diaz crush, telling Us Weekly in 2014 that she was his “first celebrity crush.” The actor said on the “Capital Breakfast” radio show earlier this year that Diaz remains “very high on the list” of his celebrity crushes.

According to Felton, the “Harry Potter” crew’s “approach was that if a piece of magic or any kind of special effect could be achieved practically, that was the best way to do it. This was especially true in the early days, when the visual effects teams had less-advanced technology at their disposal.”

“The broomstick was a metal pole fitted with a deeply uncomfortable bike saddle,” Felton wrote. “There were stirrups for your feet and a harness to stop you falling. They strapped you to the pole so you couldn’t fall and they had a more elaborate see-saw device to move you up and down, left and right. They blew fans in your face to make it look as if you had the wind in your hair.”

Some old-school movie magic was used to maintain continuity among the actors’ eye lines. A crew member would hold up “a tennis ball on a long pole with orange tape on it” and that’s where the actor needed to be looking.

See also  In the region: Lanto Griffin sidelined by back surgery | Local

“When the first assistant director shouted ‘Dragon!’ or ‘Bludger!’ you had to look at the tennis ball like it was, well, a dragon or a bludger,” Felton wrote.

“Sometimes there would be more than one tennis ball up there, and as one looked very much like another, after a while they gave us more individual objects to stare at,” Felton continued. “We chose pictures of something or somebody close to our hearts. Daniel Radcliffe had a picture of a particularly beautiful Cameron Diaz.”

Felton, meanwhile, channeled his love for fishing and “chose a picture of an even more beautiful carp.”

“Beyond the Wand: The Magic and Mayhem of Growing Up a Wizard” is now available for purchase.

3 Memorable Ways Seo In Guk Showed His Romantic Side In “Doom At Your...

Daniel Radcliffe Glad To Have Made It Out of ‘Harry Potter’...