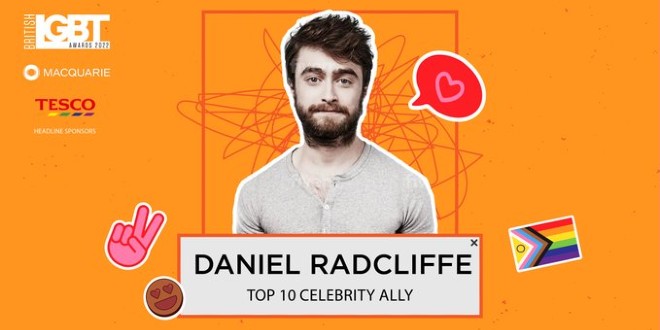 Since 2009, Daniel Radcliffe, known for playing the titular boy wizard in the Harry Potter film series, has been a powerful ally to the LGBTQ+ community when he began publicly supporting the Trevor Project, a nonprofit organization focused on suicide prevention among LGBTQ+ youth. Though it’s clear that Daniel continues his support for the community not for any accolades but because he’s fully aware of his influence and all the good it can do for people, he still deserves any recognition bestowed upon him. And recently, we learned that Daniel was among the nominees for this year’s British LGBT Awards.

The British LGBT Awards is an annual awards ceremony that acknowledges individuals and organizations that work to help improve the lives of those in the LGBTQ+ community. A couple of weeks ago, the British LGBT Awards unveiled its 2022 nominations, and Daniel’s name appears on the esteemed list. For his public support of the Trevor Project, Daniel was nominated in the Celebrity Allies category. He has some stiff competition as well because the list includes some big names, including R&B singer-songwriter Alicia Keys, Liverpool FC manager Jurgen Klopp, and beloved film actor Jamie Lee Curtis.

Daniel Radcliffe has stood up to transphobia time and again!

To you, from us at the #BritishLGBTAwards, thank you!

Daniel’s involvement with the Trevor Project goes back more than a decade when he made a significant contribution to the organization. Since then, he has appeared in PSAs directing young people to its suicide prevention lifeline, and in 2011, he expressed his gratitude at being honored with the Trevor Project’s Hero Award:

The fact that they think of what I’ve done by promoting awareness of the Trevor Project itself and the issues that it works to promote and help is a great honor. The people [who] are doing the heroic things are the people answering phones 24 hours a day in the Trevor call centers. I think that out of everything that I’ve done so far in my career, I think this is absolutely one of the most important [things], if not the most important thing, that I’m associated with.

Most recently, in 2020, Daniel released a statement through the Trevor Project speaking out regarding gender identity, declaring that “transgender women are women. Any statement to the contrary erases the identity and dignity of transgender people.”

If you want to see Daniel take home the award, voting is currently underway until April 15. In the end, however, all the nominees deserve awards for all their work to help the LGBTQ+ community. The 2022 British LGBT Awards will be held on June 24 in London, England.

Would you like to see Daniel win a British LGBT Award? Has his work on the Trevor Project had any impact on you personally? Let us know in the comments.

Charlie Puth Agreed With Elton John That His Music ‘Sucked’ Even...

Michelle Pfeiffer And Lucas Hedges Are The Ultimate Mother And Son...