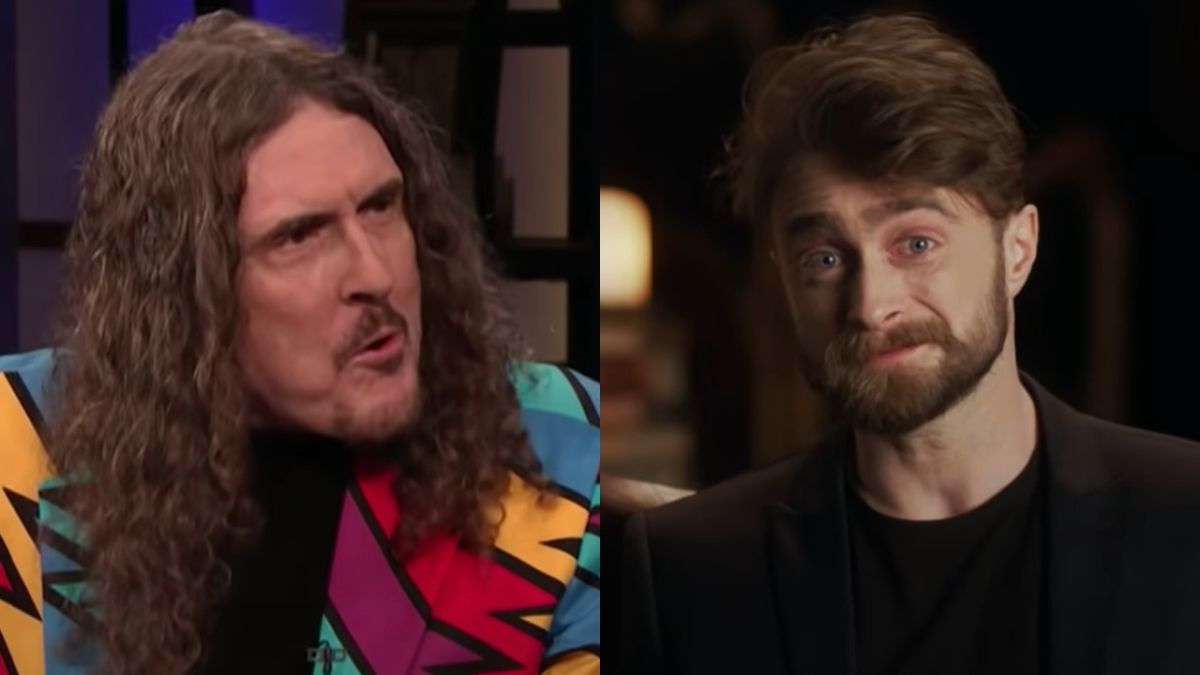 Daniel Radcliffe recently celebrated his 33rd trip around the sun, and it’s a little jarring when you think of how far we have come from his days of flying around on a broomstick as Harry Potter. “The Boy Who Lived” might be the one turning another year older, but it sounds like if anybody’s feeling reflective about their age, it’s Weird Al Yankovic — the subject of Radcliffe’s latest “weird” project. The song parody genius shared a sweet birthday message with the actor who is portraying him in Weird: The Al Yankovic Story, and in doing so divulged a bit of trivia related to their comparative ages.

When Weird Al Yankovic chose Daniel Radcliffe to portray him in the Roku Channel comedic biopic, he apparently had a pretty “White and Nerdy” reason for doing so. But despite the duo being kindred spirits in their love for satirical songwriting, Yankovic took notice of the generation gap that exists between the two, as he wished a Happy Birthday to the actor on Twitter. He wrote:

Happy Birthday to the great Daniel Radcliffe, who was born exactly two days after my LAST movie came out. #TrueFact

It only took a quick fact-check to see that indeed, The Lost City villain was born July 23, 1989, while Weird Al Yankovic’s cult classic UHF premiered in theaters on July 21, 1989. Weird Al’s fun fact is in no way indicating that the polka master hasn’t done anything of note in the past 33 years. Eight of his 14 studio albums were released after Daniel Radcliffe was born, and aside from his music, Weird Al has made numerous cameos in movies and TV shows, served as director on music videos, done voice acting for a number of animated series and much more.

The accordion player didn’t have to point out that he’s been working longer than Daniel Radcliffe has been alive in order to win the actor’s respect, as Radcliffe has shown that he’s taking his job — and Weird Al’s signature Hawaiian shirts — very seriously. The first official look at Radcliffe as Yankovic features the wig used to recreate the Grammy-winning satirist’s curly hair, but the actor felt that growing out his own mustache was the best way to embody his subject.

Weird: The Al Yankovic Story was actually conceived back in 2010 (for those keeping score, when Daniel Radcliffe was 21), as Eric Appel wrote and directed a Funny or Die movie trailer with the same title. In that trailer, Aaron Paul played the titular character. Paul was actually supposed to make a surprise cameo in the Daniel Radcliffe-led movie, but COVID ruined those plans. The part of Madonna has also been recast since Appel’s 2010 skit. Evan Rachel Wood was picked to play the Material Girl, replacing Olivia Wilde.

Weird: The Al Yankovic Story will track the musician throughout his long and illustrious career, starting with the early days during his rise to fame in the late 1970s and early 1980s, with parodies of major hits from artists like Madonna, Michael Jackson and Joan Jett, to name a few. The Roku Channel has not announced a release date for the biopic, but while we wait that, be sure to check out our 2022 Movie Release Schedule to see what films are coming to theaters soon.

Arnold Schwarzenegger went under the knife to correct his faulty heart...