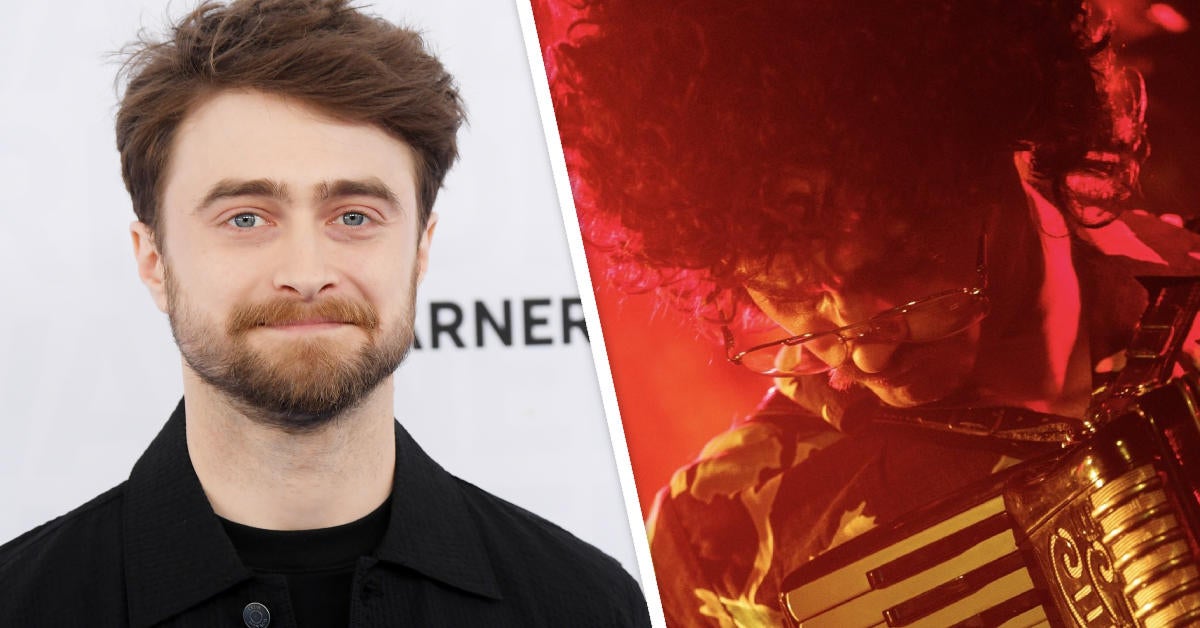 While Daniel Radcliffe is arguably best known for his starring role in the Harry Potter franchise, his post-Hogwarts filmography has been dotted with some surprising installments. Among them is WEIRD: The Al Yankovic Story, which will see Radcliffe portraying the iconic comedian and musician Al “Weird Al” Yankovic. Production recently wrapped on the upcoming live-action film, which is expected to debut exclusively on Roku. In a recent interview with Good Morning America, Radcliffe spoke about working on the biopic, and teased that it was “one of the most fun jobs” of his career.

“We just finished filming not that long ago,” Radcliffe explained. “It was honestly one of the most fun jobs I’ve ever done. If you can’t have fun making the Weird Al movie, what are you doing with your life? I’m really excited for people to see it. It’s going to be a while, still.”

“If you can’t have fun making the Weird Al movie, what are you doing with your life?” — #DanielRadcliffe

“He’s the best,” Radcliffe said of working with Yankovic. “I know everyone says this about him, but it’s so lovely to meet somebody that you look up to and you know as a hero to so many people, and to have them just be kind and fun and sweet. I can now go to my grave saying that I’ve had accordion lessons with Weird Al.”

WEIRD: The Al Yankovic Story promises to hold nothing back when it comes to exploring every facet of Yankovic’s storied life, from his meteoric rise to fame with early hits like “Eat It” and “Like a Surgeon” to his torrid celebrity love affairs and famously depraved lifestyle. The film will also star Evan Rachel Wood as Madonna, Toby Huss and Julianne Nicholson as Yankovic’s parents, and Rainn Wilson as Dr. Demento.

“Wearing the Hawaiian shirt is a huge responsibility that I don’t take lightly, and I’m honored to finally share with the world the absolutely 100 percent unassailably true story of Weird Al’s depraved and scandalous life,” Radcliffe said in a statement when the project was initially announced.

“When my last movie UHF came out in 1989, I made a solemn vow to my fans that I would release a major motion picture every 33 years, like clockwork. I’m very happy to say we’re on schedule,” Yankovic said in a statement. “And I am absolutely thrilled that Daniel Radcliffe will be portraying me in the film. I have no doubt whatsoever that this is the role future generations will remember him for.”

“When Weird Al first sat me down against my will and told me his life story, I didn’t believe any of it, but I knew that we had to make a movie about it,” Appel added.

“I am excited that my first project as the owner of Funny Or Die Studios is to help bring the story of ‘Weird Al’ Yankovic to the screen. Weird Al is a comic genius and his impact on pop culture, his mastery of the music video, his award-winning music and his incredible life are a perfect fit for the talented producers at FOD,” said Henry Muñoz III, Funny Or Die Chairman and executive producer. “We are honored to partner with Roku, Tango and our director Eric Appel on this important movie. WEIRD has brought together a weird and wonderful team of creative people, to tell the story of a man who has made people laugh and sing across the world.”

Are you excited to see Daniel Radcliffe play Weird Al? Share your thoughts with us in the comments below!

Olivia Cooke on Her Favorite Deleted Scene from #HouseoftheDragon S1 “In the Dinner …...

Ruben Randall - December 10, 2022 0
TV/Movies
KAILYN Lowry's fans are convinced they've spotted "proof" that she has secretly given birth to a child. Eagle-eyed followers pointed out what looked like...