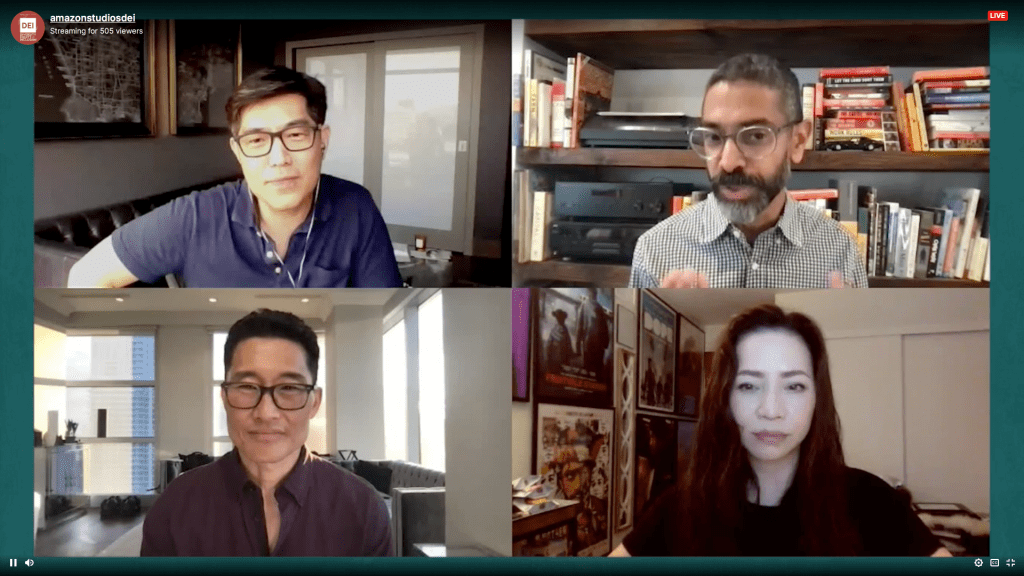 Even with the most recent watershed moments of Minari, Sound of Metal and Crazy Rich Asians, finding a place in Hollywood remains a challenge for Asian American and Pacific Islander creatives and talent.

“I think you cant help but look at the relationship between representation in media and representation of us. In general they’re inextricably linked that’s why it’s important we’re in a position where we can change the narrative in a way that’s meaningful,” Kim said.

Kim, a multi-hyphenate who has tirelessly used his platform to speak up against Asian discrimination and anti-Asian violence, said that while there’s been a push for more Asian stories on the big-screen, television still needs some catching up.

Bongiovi, the executive producer behind Godfather Of Harlem, Sorry To Bother You and Fruitvale Station, expanded on Kim’s point , noting that the limited portrayals of the Asian American experience can do more harm than good. She noted that AAPI talent, out of the lack of opportunities, often take work that requires an accent or portraying a stereotype to some degree. While some work may be opening up, she added that it’s up to producers and executives to be more vocal about offering more nuanced roles and stories.

See also  Why Amanda Seales Just Called Out the Show

But even when substantial and non-stereotype-based roles do open up, they’re rarely made available to undiscovered and emerging talent. According to a recent study from the USC Annenberg Inclusion Initiative Nancy Wang Yeun and Stacy L. Smith, Dwayne “The Rock” Johnson accounted for nearly 1/3 of all AAPI lead roles. While the Jumanji star may be in high-demand, Sharma, who is the founder and CEO of Marginal Mediaworks and board chair of CAPE, said there is an abundance of willing and talented actors and creatives hailing from the Asian diaspora also ready to take on major roles.

“Every time I hear the phrase ‘it’s a pipeline problem,’ I lose my mind,” he said. “Talent and creativity is equally distributed, but access isn’t. The amount of amazing projects, stories, storytellers is in no shortage, so it makes you realize this is systemic. The stories we’re allowed to tell is coming through a system that is structurally biased historically.”

He added that when it comes to AAPI narratives, and those that originate from other marginalized communities, there are only two seemingly acceptable stories – those of extreme hardship or extreme exceptionalism. When BIPOC creators attempt to break out that mold or try to find an in-between, they’re met with, “we have things like that,” Sharma said.

Perceived value on stories from the AAPI community, and other minority groups, doesn’t just dictate the amount of opportunities available to actors, writers and other creatives. Bongiovi added that a project’s perceived value will also determine the scale, budget and even genre, continuing a cycle that leaves undiscovered, diverse talent out of the picture.

“Anything that stars people of color is has been devalued. If you have stories, or if you have talent in the BIPOC narrative space, then the value of it is usually perceived as lower, so your budget needs to be lower, because ‘we’re not sure if you can succeed,’” she said. “That’s been perpetuated throughout decades and decades and I would think that we would have proven that so many times over, but it still happens.”

“It usually happens to all BIPOC storytellers. No period pieces. Contemporary, comedy – everything that could be economically less of a budget,” she continued. “I hope that we can actually compete with our counterparts, with the white shows that could do romantic comedy, could do period pieces and they could do whatever they want and they get budget equity.”

Turning off the transponders and going dark is passé – This sanctioned Russian oligarch...

Ruben Randall - August 8, 2022 0
Actress
We recently had the chance to sit down with Kat McNamara to chat with her about her upcoming stint on The Flash: Armageddon, where...