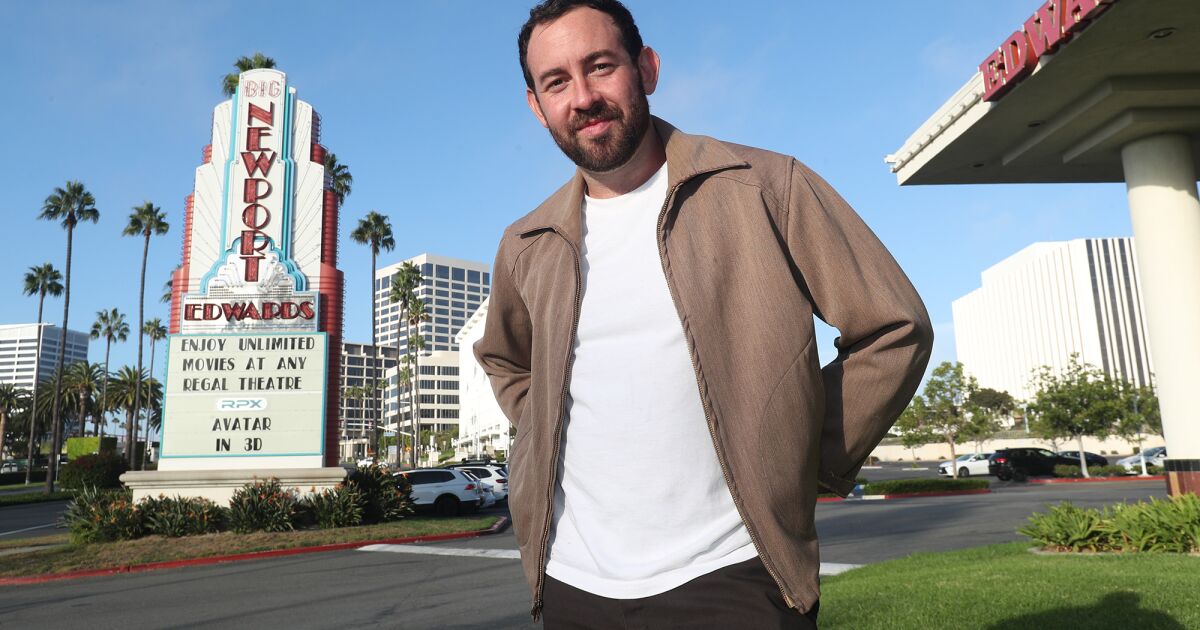 More specifically, the director is thrilled to show his debut full-length film, “Wes Schlagenhauf is Dying,” at Regal Edwards Big Newport across from Fashion Island.

“I’ve been to this theater, I don’t know, 500 times?” Seaman said. “To be playing here is incredible. The first R-rated movie that I snuck into was ‘Jackass,’ in Theater 1 right here.”

Seaman, now 30 and a resident of Los Angeles, adds with a smile that he’s also paid for a movie at Big Newport many times.

He said he made the film during the coronavirus pandemic with his buddy Devin Das.

After graduating from CdM in 2010, Seaman studied at the New York Film Academy for a couple of years. He dropped out to work at the comedy website co-founded by Will Ferrell, “Funny or Die,” and it was there that he met Das in 2012.

They lived together in West Hollywood for three years and have many fond memories from that period. In fact, there are plenty of callbacks in “Wes Schlagenhauf is Dying.”

The 78-minute film tells the story of the friends taking a road trip to Idaho during the pandemic to visit their friend Wes, who has contracted COVID-19 and is in bad shape.

It sounds like a heavy premise, but the movie keeps it light, meta and satirical. Seaman, Das and Schlagenhauf all use their real names, but Seaman maintains they are nothing like the unlikable guys portrayed in the documentary.

“I was seeing a lot of commercials during that time that were like, ‘We’re in this together, it’s all good, be sure to enjoy this Kit-Kat,” he said. “And it’s like, ‘We shouldn’t be doing this right now.’ Filmmaking was still deemed an essential business, which was very funny to me.

“I don’t think we would ever again make a movie this meta or this on the nose. In a sense, it’s a piece of commentary by it folding in on itself at the exact same time that it’s happening.”

The film debuted at the Tribeca Film Festival earlier this year.

Seeing it shown at the Newport Beach festival will also represent a homecoming for Trent Anderson, a producer on the film who went to Sage Hill School. Seaman and Anderson both went to Harbor Day School, and played on a Little League team together two decades ago.

Movies are generally categorized as ultra-low budget when their budgets are less than $250,000, Anderson said. And “Wes Schlagenhauf is Dying” has a budget well below even that.

“Parker does one-day commercial shoots with bigger budgets than we had for our entire 19-, 20-day feature shoot,” Anderson said. “Making a movie is really hard. It was my first time doing it. You had a bunch of people who were just really excited to do this. Those are long hours and hard days, and doing it especially without the guarantee that something great is going to happen is a big ask. Everyone came every single day and was excited to be there and work on it, and I think that all comes from Parker. The director has to set the tone on set.”

Anderson had lunch with an actor friend in Griffith Park in the summer of 2020, and the actor ended up putting the first money into the film. Seaman also got some key cosigns, including actor and filmmaker Mark Duplass. Seaman was given a cameo — a personalized video message — from Duplass during the early stages of the pandemic. The cameo plays a role in the movie, and Duplass ended up liking what he saw and agreeing to appear beyond that as well.

D’Arcy Carden, well-known as Janet from the NBC sitcom “The Good Place,” also appears in the cast and as an executive producer.

“I think this was like, we’ll make a movie for a shoestring budget starring us, shot over the course of a very minimalized time,” Seaman said. “Hopefully that will prove that with money and bigger actors and even just resources, we can do it again. It’s opened up a lot of doors. Nothing I can say yet, but I think there’s a lot of potential opportunity. It kind of did exactly what we wanted it to, in many ways. I will never make a movie in this style or vein again, but I hope this will be a little time capsule that will grow better with age.”

Das, also listed as a screenwriter and producer, is returning to the Newport Beach Film Festival for the second straight year after attending last year for “Keeping Company,” a horror comedy.

“Creatively, we were open to anything,” Das said. “We didn’t feel this pressure the way we did before, when it’s like, what do we need to do to stand out? We did something that was fun for us. It’s not really terribly ambitious … but it was a lot of fun. It kind of felt like we were in summer camp for a few months.”

Support our coverage by becoming a digital subscriber.