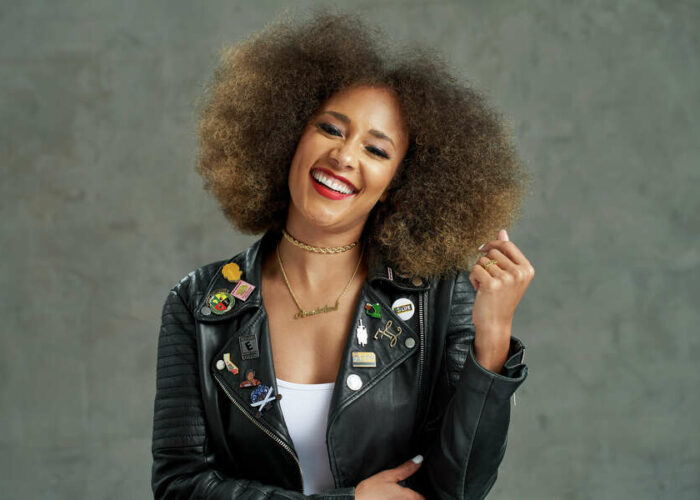 Amanda Seales kept plenty busy during the pandemic, even as her stand-up comedy work required a pause. Seales released “I Be Knowin’” — her first stand-up special — in 2019, before everything shut down. At that point she’d already been a regular on HBO’s hit series “Insecure.” She launched a comic game show (“Smart Funny and Black”) and served as a co-host of the talk show “The Real.”

But to hear Seales tell it, she’s ready to get back to live audiences.

Her current tour, “Black Outside Again,” comes to the Bayou Music Center this weekend.

Q: “I Be Knowin’” is now three years old, which is a little longer lag than usual for some comedians. How was the pandemic for you creatively? Obviously the option of stand-up gigs went away for a while…
A: True, but to be honest, during the first two years of the pandemic I didn’t miss performing. I just appreciated the stillness. A lot of times with comics, you just need to sit down and let some weirdness happen so we have something to talk about. And it hasn’t been much weirder than the pandemic. But what really drove me to get back on stage was more things that were going on politically in the country. And I knew before I go out, that a lot of folks will appreciate that I’ll say the things they’re thinking but maybe not able to say. So I knew, I had to get back to my role.

See also  ‘Gutfeld!’ May Be the New ‘King of Late Night’ for Total Viewers – in Other Ways Not So Much

Q: Are their complications cramming all that time into a set? A lot has happened.
A: It’s not difficult. But I definitely normally do an hour. The set now is more like 90 minutes. There’s just so much fodder, so many things I want to cover.

Q: Does that push you into the role of editor? Are you cutting as much as creating?
A: To be honest, not really. Its’ not like I was limited before. There has always been no limits on this. When I do a show, people get the full experience. And I try to make every show different. Not just for them, but for me as well. There’s an expectation I’ll talk about things going on, the zeitgeist things. But I’m responding to an ever-changing and consistent stream of tomfoolery.

Q: That’s a stream that doesn’t appear to be running dry.
A: No, I have no shortage of topics on that. My last tour was 2019. I’ve lived a lot of life since then, and we all have, against our own will. But I try my best through my comedy to relate to folks in that way. . . . One of the problems in Texas is that the political power in Texas doesn’t represent the people of Texas by and large. That’s a frustrating place to be in. As a comedian, my hope is to use this opportunity to revitalize folks. Empower some folks. Give them a sense of relief for a little bit, so they can get back in the game and fight an imbalance of power.

Q: Your previous special made me think about time a lot: youth vs. the present. But then there was a gap. My hair turned gray in that time.
A: Two years is a long time. Particularly when we thought this would be done in a month or two. I go back and think about that time. Here we are two years later and still not done.

Q: How does that affect what you do? Do you think it’ll be more difficult to perform? Will you have to read the room more?
A: Yeah, I think that may be the case. But for me, it’s always about connecting with folks. And part of that will be telling them, what is going on is not normal. And we can’t get comfortable, because there is something very serious happening in the country that’s deleterious to all of us. Part of my country is about using that uncomfortable stuff that feels like a nuisance. But it’s necessary.

Louise Fletcher, 88, Dies; Oscar Winner for ‘One Flew Over the Cuckoo’s Nest’

Ruben Randall - November 14, 2022 0
Money
Interviewing Reese Witherspoon is a nerve-racking business. Back in 2019 she was launching her Apple TV+ drama The Morning Show at a West Hollywood...