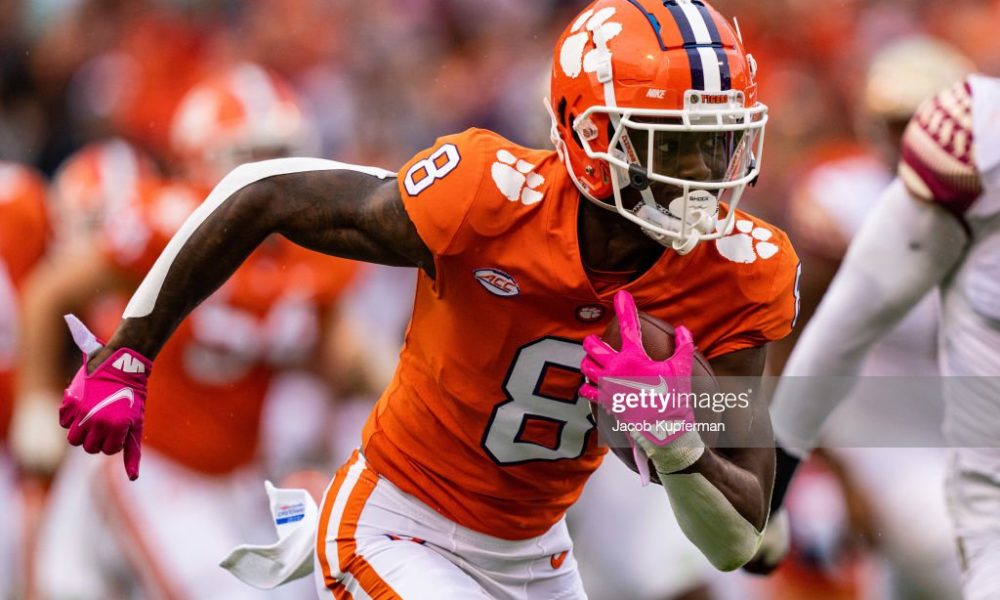 Justyn Ross looks the part of a NFL receiver. But he hasn’t tested well during the pre-draft process and comes with a questionable medical history. Despite those red flags, the Pittsburgh Steelers seem to be interested. Mike Tomlin and Kevin Colbert attended the Tigers’ Pro Day, though that’s common for them in a given year, with New receivers coach Frisman Jackson joining them and personally putting Ross through his workout.

Ross is working towards the NFL after missing the entire 2020 season due to a spinal injury. One that required surgery for a condition called Klippel-Feil syndrome, a congenital fusion in his spine that caused bad “stingers” or numbness in his body. A condition that doctors feared would end Ross’ college career, one that shined brightly in 2018 and 2019, finding the end zone 17 times over those two years.

Deemed too much of a medical risk to continue playing without surgery, Ross had to find a doctor with the knowledge to relieve the pain and numbness. Ross and his family turned to Dr. David Okonkwo, who doubles as the Pittsburgh Steelers’ team neurosurgeon. In fact, it was Dr. Okonkwo and Dr. Joseph Maroon who performed the spinal stabilization surgery on LB Ryan Shazier following his 2017 injury. And it was Okonkwo helped get Ross back on the football field.

Ross was featured in a wonderful ESPN piece written by Andrea Adelson that outlined the ups and downs of Ross’ career. It included quotes from Dr. Okonkwo, who acknowledged the rarity of the injury in football players.

“Justyn has a condition that is very rare, and to my knowledge, there is no precedent of another high-level American football player with this condition playing football,” he told Adelson in the article.

Ross was forced to miss the entire 2020 season recovering from the injury. But he returned this past season. His numbers weren’t as strong as before, blame that on the time missed and loss of stud QB Trevor Lawrence to the NFL, but the fact Ross was playing football at all is a modern miracle. In 2021, he caught 46 passes for 514 yards and three touchdowns.

Any injury history will compel teams to dig deeper during the pre-draft process. A rare, serious spinal injury like Ross’ is enough to scare them off. And there will likely be some teams who remove Ross from their draft boards. No one knows where the Steelers have him slotted but their close relationship with the doctor who performed the surgery gives them a lifeline no other team has. Reviewing medical records is one thing, having the doctor as part of your team is another. The fact Pittsburgh personally worked him out shows Ross is still on their board. If there’s a team willing to given the green light medically on him, it’s the Steelers.

In the article, Ross’ family praised the job Dr. Okonkwo did as a surgeon and in making his family feel as comfortable as possible through a difficult process.

“He never made me feel like he had any doubt in what he could do. So that’s where we got the confidence that OK, we can go ahead and do this,” Ross’ mother Charay Franklin said of him.

In a jumbled up, messy draft, the one thing you can guarantee is the Steelers will draft a receiver. Who and where are more open-ended questions. But Ross is a name who shouldn’t be forgotten for his early-college production and the Steelers’ doctors keeping his NFL dream alive.

Everything We Know so Far About Nicole Polizzi’s Seaside Heights ‘Snooki...